As the British People's Party's Kate McDermody sucks up to the cops to protect her anti Hip Hop demo in Leeds on October 18th, her 'racial comrade' Tony White has his collar felt. 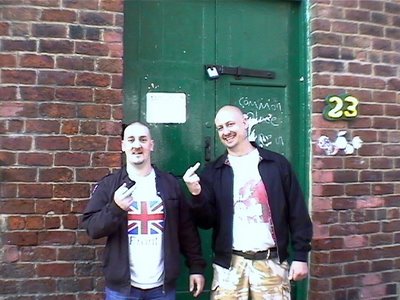 White poses outside 'The Common Place' with another moron 'Wigan Mike' 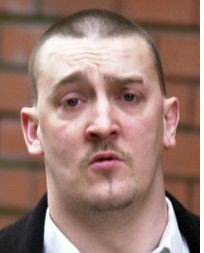 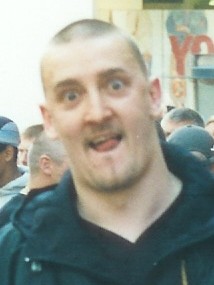 The NF's 'Yorkshire Organiser'? They must be desperate

As predicted previously on this site, re-emergent Leeds fascist Tony White, has been arrested yet again, for possession of racist propaganda. White, an inevitable ‘patsy’ for the likes of Kevin Watmough and Kate McDermody of the ‘British People’s Party’, was arrested in “an intelligence-led operation” yesterday (October 1st.)

Despite two previous spells in prison for distributing racist literature, White had long been a pariah in ‘white nationalist’ circles, having been verified as a police informer. Giving assistance to the police, together with (bizarrely) claiming to have assisted the Jewish community, is all that has saved him from a longer prison sentence in the past. That, and the fact that he is obviously deranged.

After being released from his latest prison sentence, and having re-established some contacts while serving it, White has once again returned to his old ways. It says a lot about the pitiful ‘National Front’ that White was their ‘Yorkshire Organiser’ and he had become involved more recently with the so-called ‘Racial Volunteer Force’.

It is perhaps his long-term involvement with Kevin Watmough however, that has once again led to his downfall. Despite Watmough’s clear contempt for White, and Watmough having grassed him up on previous charges, White seems unable to keep away from bad company.

Only a few months ago, jurors sitting in the trial of Simon Sheppard and Steve Whittle (see

http://www.indymedia.org.uk/en/2008/07/403959.html?c=all ) alleged that White had been following them home and threatening them. White was described in court as “an associate of Kevin Watmough” and the pair were questioned about the matter. White appeared to be doing Watmough’s dirty work once more.

Being too stupid to learn his lesson yet again, White continued to pal up Watmough and his girlfriend, the odious Kate McDermody. Most recently he was photographed with McDermody groupie ‘Wigan Mike’ outside the locked doors of ‘The Common Place’ (a rented social centre in Leeds) – see

McDermody, whose ego far exceeds her intelligence, has been promising moronic ‘boot-boys’ like White a ‘return to the streets’ via “her” demo against Black ‘Rap’ music in Leeds on October 18th. She saw the likes of White, and the lardy skinheads of the RVF, as ‘muscle’ to protect her attempt to “walk the walk.” Unwilling to hedge her bets though, she has not stopped grovelling to the cops (who she had previously slagged off as “agents of ZOG”) for protection since the idea for a demo first entered her empty head. For some of the would-be fascist ‘street warriors’ a ‘return to the streets’ which actually means being penned inside a fence surrounded by cops while teenagers shout abuse, has proved a rather ignoble thought. This has led to some squabbles in recent weeks, not least with RVF Acting Fuhrer Adrian Brookes, making McDermody all the more desperate for police protection.

On the very day White was arrested, McDermody was once again sitting down for a cosy chat with West Yorkshire police. She also decided to launch a new lick-arse campaign to “Take the cuffs off cops, put them on criminals.” We imagine that thicko Tony White was unable to see the irony of this situation as he was been led away by the same cops McDermody is sucking up to. Once again, it is clear that White has been regarded ultimately, not only as a liability, but also as expendable.

After White’s arrest a statement on Kevin Watmough’s ‘C18 Forum’ stated: “A well known NF activist ,BPP supporter and RVF volunteer has been arrested yet again for possession of racially inflammatory material. This appears to be a witch hunt against anyone bringing unity and is aimed at those high profile activists doing so,so beware people they're at it again and from what I'm hearing the details given were within a select few. This is what the purveyors of unity get when they try to unite us! The Hotline number or contact number for this person is now in the hands of the state but other contacts are still functional. Further details as we get them.”

The only response to White’s predicament read: "i was nicked show me attention show me attention love me love me i am the top geezer in nationalism worship me please thats why i am always splitin partys please adore me please please ffs" Watmough has allowed this post to remain in place (assuming he did not actually make it.)

The National Front have since issued the following statement: “"Subsequent to a request from his family, the following statement is issued to all interested persons: Yorkshire NF Organiser Tony White, was arrested yesterday (1st.Oct.08) for posession of racially inflammatory materials. Given the current climate of back-stabbing and stirring, this came as no surprise to him or his family, as it is his third arrest for the same type of offence. It is also correct to assume that it was an intelligence led operation to arrest him and that the specific information was only known by three people..”

Beyond this, there have been no statements in support of White from his ‘comrades’ in the BPP, RVF, or BFF (‘British Freedom Fighters’) We note that ‘Wigan Mike’, leader of the latter grouplet, and Kate McDermody No1 groupie, was supposed to be meeting White in Leeds on the day of his arrest. He did not appear.

Tony White, may be stupid, mentally ill even, but he has proved himself time and again to be a vicious neo-Nazi, who richly deserves the full consequences of that. He can expect no sympathy or pity from antifascists when he inevitably starts his next jail term. Nor should he expect our forgiveness.

As for Watmough and McDermody, it should be obvious to everyone what these scum are.

SMASH THE BPP – NO NAZIS ON THE STREETS OF LEEDS!
SATURDAY 18TH OCTOBER, 11.00AM
HMV, LANDS LANE, LEEDS CITY CENTRE

PDF leaflet for the Leeds demo:

PDF poster for the Leeds demo: