In London: Assemble 1pm at New Scotland Yard, with pots, pans and other stuff to make some noise!!

A broad movement of campaigners and organizations is calling on everybody to join action against excessive surveillance by governments and businesses. On 11 October 2008, concerned people in many countries will take to the streets, the motto being "Freedom not fear 2008". Creative action, from protest marches to parties, will take place in many capital cities.

Call to mass action Saturday 11th October against the surveillance state in
solidarity with activists all around the world. 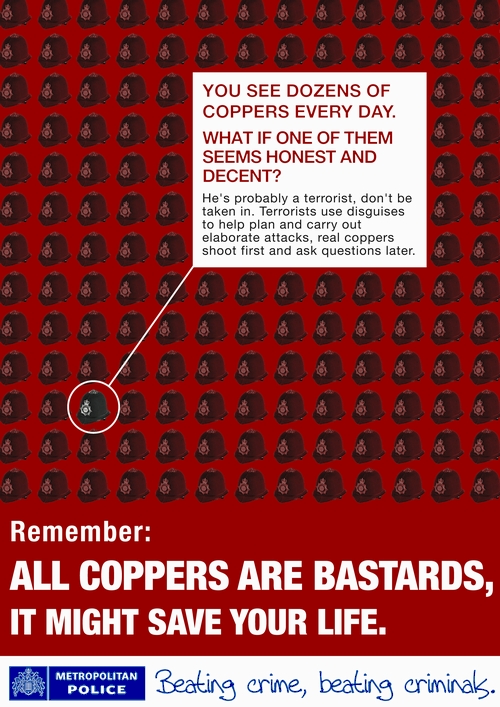 Surveillance mania is spreading. Governments and businesses register, monitor and control our behaviour ever more thoroughly. No matter what we do, who we phone and talk to, where we go, whom we are friends with, what our interests are, which groups we participate in - "big brother" government and "little brothers" in business know it more and more thoroughly. The resulting lack of privacy and confidentiality is putting at risk the freedom of confession, the freedom of speech as well as the work of doctors, helplines, lawyers and journalists.

The manifold agenda of security sector reform encompasses the convergence of police, intelligence agencies and the military, threatening to melt down the division and balance of powers. Using methods of mass surveillance, the borderless cooperation of the military, intelligence services and police authorities is leading towards the construction of "Fortresses" in Europe and on other continents, directed against refugees and different-looking people but also affecting, for example, political activists, the poor and under-priviledged, and sports fans.

Surveillance, distrust and fear are gradually transforming our society into one of uncritical consumers who have "nothing to hide" and - in a vain attempt to achieve total security - are prepared to give up their freedoms. We do not want to live in such a society!

We believe the respect for our privacy to be an important part of our human dignity. A free and open society cannot exist without unconditionally private spaces and communications.

The increasing electronic registration and surveillance of the entire population does not make us any safer from crime, costs millions of Euros and puts the privacy of innocent citizens at risk. Under the reign of fear and blind actionism, targeted and sustained security measures fall by the wayside, as well as tackling peoples' actual daily problems such as unemployment and poverty.

In order to protest against security mania and excessive surveillance we will take to the streets in capital cities in many countries on 11 October 2008. We call on everybody to join our peaceful protest. Politicians are to see that we are willing to take to the streets for the protection of our liberties!

Assemble 1pm at New Scotland Yard with pots, pans and other stuff to make some noise!!