You can read a much longer version of this report with more photos and background info at: 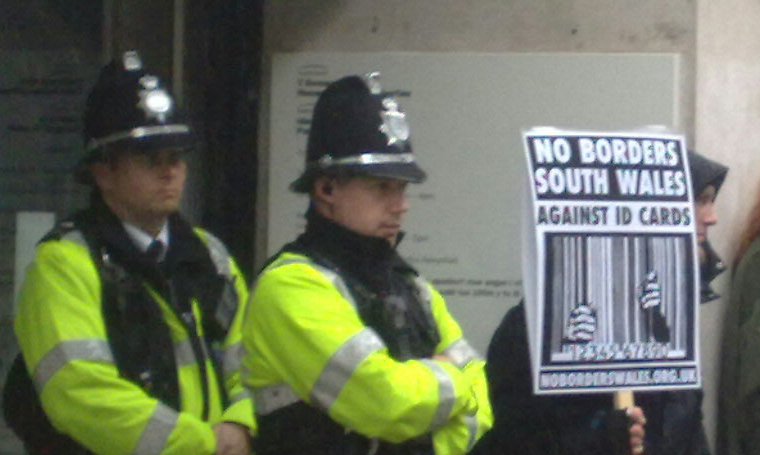 On Saturday afternoon over 30 people joined with No Borders South Wales outside Newport Passport Office to protest against the introduction of ID cards for non-EU foreign nationals resident in the UK from this November.

Thousands of copies of our new leaflet “Big Brother is coming“, (available from our website) produced especially for the event, were distributed to members of the public. The leaflet lays out the government timetable for rolling out the scheme and makes the point that these new ID cards are not only a repressive measure against migrants, they are the first shot in an attack against everyone’s freedom. The vast majority of passers by who took the time out to speak with people on the demonstration were very supportive of our campaign and were were adamant that they would not accept an ID card themselves.

A dozen police were waiting by the Passport office at 2pm when people arrived. The senior officer informed people that they were willing to ‘facilitate’ the protest providing only two people were stood outside the entrance to the passport office and everyone else stood on the other side of the road. The police were politely but firmly told that that was both unreasonable and unacceptable. The officer then said he would go inside the office and then return to implement “another course of action”. Unsurprisingly, this other course of action was to completely abandon his original demand and only ask us not to block the entrance, which we had already told him we had no intention of doing.

Though in this case the police soon realised we were not going to be bullied around and the protest was able to pass off without too much of their interference, it is a concern that less experienced people wishing to exercise their legal right to protest are intimidated into being sidelined into designated “protest zones”. Across the UK police forces regularly demand that protest organisers contact them beforehand, despite the fact we all have the right to gather and protest without asking for permission. Under the guise of “minimising disruption” and even protecting the protest from disgruntled members of the public(?!?), it is increasingly common for police to view an effectively policed protest as one which as few people as possible are aware is happening. A good example of this was the march against the military academy in Cardiff which the police forced out of sight down back-streets, earlier this year.

Four officers from Gwent Police’s ‘Evidence Gathering Team’ filmed participants at the demonstration constantly, both from a distance and at close range. They alsofrequently checked the inside of their hats where we believe they kept their ’spotter cards’ which identify known activists. These four officers then followed a number of the demonstrators to a local pub where they stood outside patiently in the rain, waiting for them to come out and then followed them again, over the River Usk to the legendary TJs where Smash EDO were showing a film to build support for their upcoming protest before day two of No Border Fest. Their actions are clearly politically motivated. As one passer by noted: “I didn’t know there were so many police in Newport”