In April 2006, about 30 precarious superheroes took delicatessen from a gourmet supermarket in the German City of Hamburg and distributed them to people who could use them. They also left an invitation for the upcoming EuroMayDay Parade.

The action worked not only as a circulation of luxury goods, but also as a media stunt. The police didn't like it at all and tried to catch the superheroes with lots of vans and a helicopter – in vain [report en]. Some hints as to why the state might think that these superheroes are so dangerous can be found here.

After a house search, the cops thought they had found one of the activists who participated in the action and convicted her in court, based on a perceived similarity between her and a photo of one of the masked superheroes. She appealed, and this Wednesday, she will be in court again. This time, the prosecution based the accusation on the fact that they found documents on her laptop dealing with “precarization”. If this is enough for criminalisation, the main service trade union in Germany must be regarded as criminal, as well as lots of academics and researchers who have been working on the issue of precarity for more than a decade. Let alone Euromayday groups in more than 20 european countries.

Read on for the press release of Euromayday Hamburg, who are supporting the activist in court: 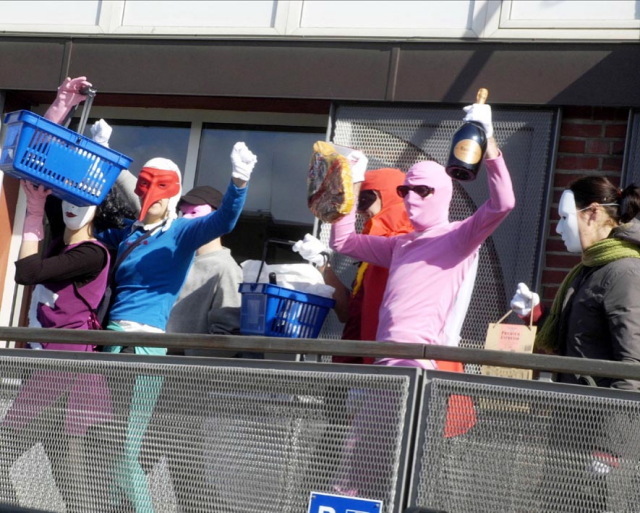 In April 2006, about 30 precarious superheroes took delicatessen from a gourmet supermarket in Hamburg and distributed them to people in need. The prosecution believes to have found one of the superheroes who participated in the action. Following a conviction in June 2006, the law suit is now moving to the court of appeal. The appeal court will take place on Wednesday, October 8th, 9am, in the County Court Hamburg (Sievekingplatz 3), Room 345. (An extensive press release will follow).

A reminder: In the morning of April 28th, 2006, precarious Superheroes took champagne, leg of venison and other delicatessen from the Gourmet-Supermarket “Frische-Paradies” at Große Elbstraße, Hamburg. Subsequently, Spider-Mom, Superflex and their combattants set about to redistribute the goods. The delicatessen were discreetly transferred to daycare-teachers, interns, cleaning women and one-euro jobbers (unemployed who are forced to work for one Euro per hour). Why shouldn't precarious workers, who are increasing in numbers, participate in the abundant wealth of the city of Hamburg?

The police responded to “possibly the funniest raids in German criminal history” (The Guardian) with aimless and legally dubious house searches. Nevertheless, the defendant was convicted at first instance.

In the appeal court, the recriminations are based on no less absurd evidence. This time, it is not a dark pony tail, which allegedly points to the participation of the defendant in the action. Rather, the focus is on the documents on her laptop, which are amongst other things dealing with the topic of precarisation. This term has been subject to academic debate and media interest for more than ten years. As early as 1996, the Friedrich-Ebert-Stiftung organised a conference about precarisation. Today, Google displays 46000 hits for the respective search key.

Peter Bremme from the German trade union for the service industry Ver.di and head of the department for special services, said: “If the preoccupation with the topic of precarisation would be enough to convict someone in court, this would put the trade unions under general suspicion. Especially in the department for special services, precarisation is is a core issue.” Sabine Dittmar from EuroMayDay Hamburg explains: “A conviction based on the use of the term precarisation would be tantamount to an attempt to criminalise societal debates.”

Relevant Links about the Action and the Superheroes:

- Collection of press reviews about the action (Gr)

The appeal court was today, and the activist was acquitted! Apparently there were lots of corporate journos there, the first article appeared already (in german):

Collection of media reports about the court case

and a report on indymedia germany

best of luck to her. Clearly she's innoccent, but if she wasn't (which she is) then she's a legend. That raid was bloody brilliant. Notice it's caught on in greece now.