SOCPA is dead.... but the illegal harassment continues

sections 132-138 of the 'serious organised crime and police act' sought to control demonstrations near parliament, and specifically brian haw's seven year vigil opposite the carriage gates. the law is in tatters, but police, unable to use these powers, are resorting more and more to unlawful violence, intimidation, and harassment 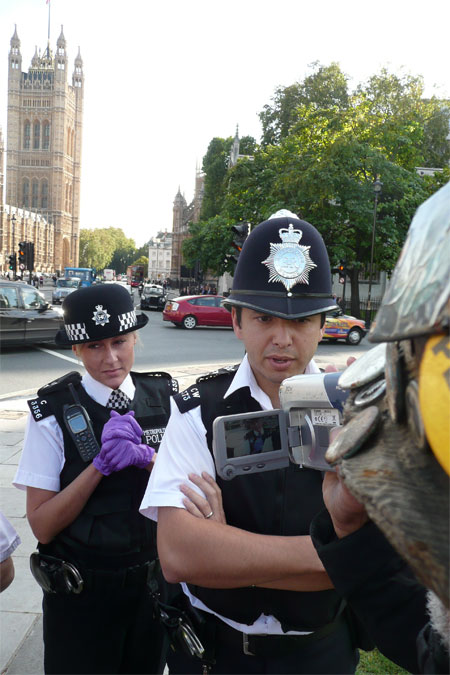 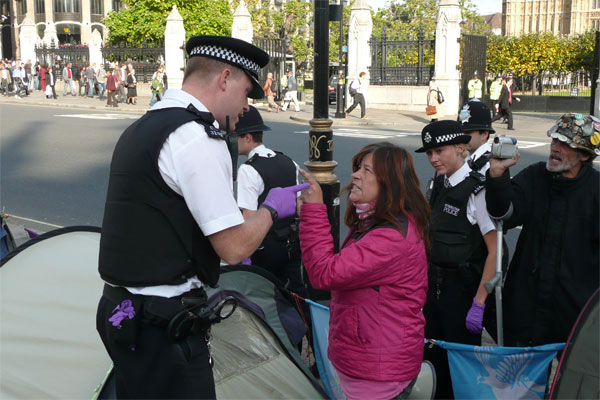 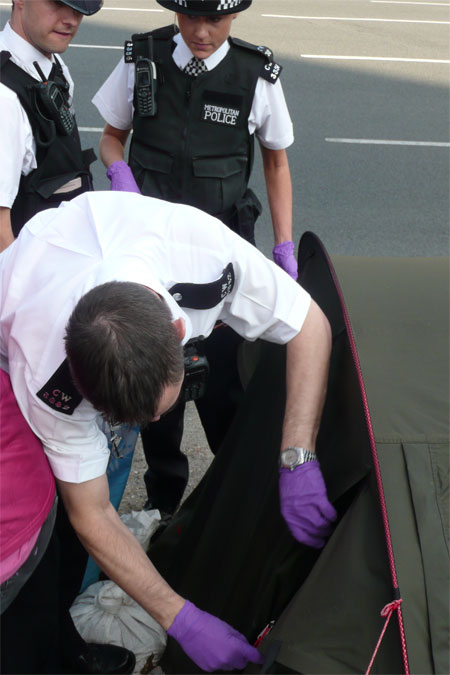 we'll do it anyway 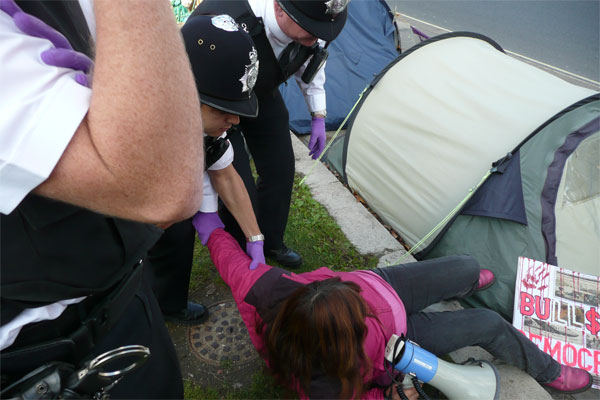 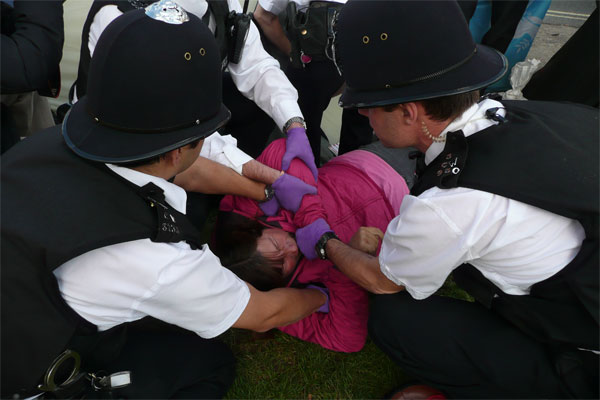 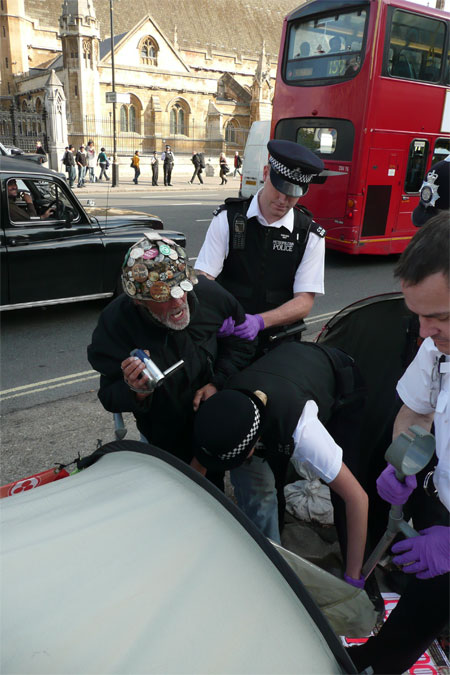 poor brian does his best to obstruct 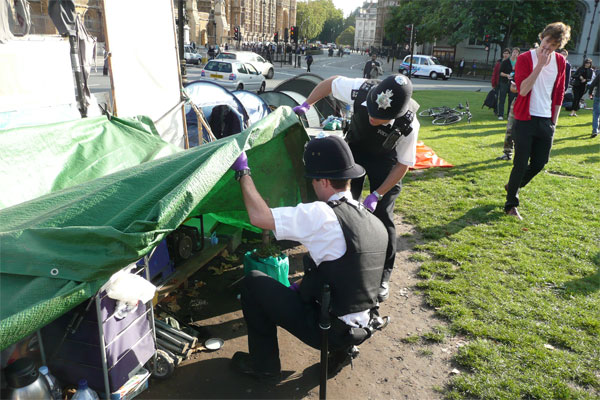 not a real search - just a glance 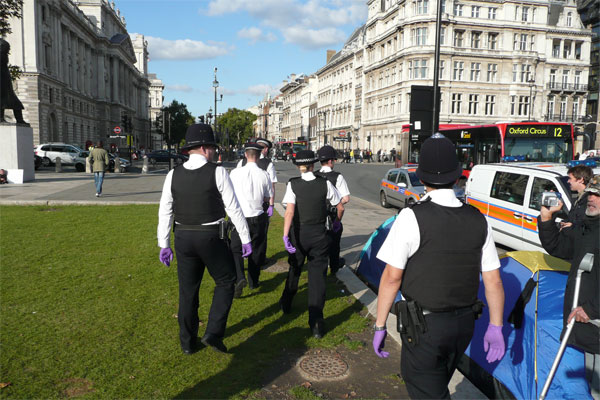 as reported previously on indymedia (

http://publish.indymedia.org.uk/en/2008/07/404526.html), the state is unable to use socpa legislation against the peaceful parliament square campaign, and in particular, barbara tucker and brian haw.

instead, the police use physical force and indefensible intimidation to continue their campaign of harassment against the protest.

i reported at the end of july (

http://publish.indymedia.org.uk/en/2008/07/404933.html) how police raided the tents at parliament square to perform a supposed PACE section 17 search. since that article, brian's lawyers, bindman's, have put together a document, citing many examples of case law, that shows the use of section 17 cannot be lawful under these circumstances.

despite that, a van full of police turned up at around 3.30 this afternoon, donned their sinister purple latex gloves, and began another unlawful search of the tents.

over and over, barbara and brian warned the police that their search was unlawful, that there were privileged legal documents in the tents that the police had no right to see, and that their solicitors had written to the police pointing out that searches would be unlawful. briefly, CW3193 checked with base, but he received instructions to continue and so they proceeded.

although the officer threatened barbara with arrest for assault, both she and brian continued trying to stop the cops from entering the tents and going through their things, and the police simply responded with force and violence.

at one point, three male thugs twisted barbara's arms and held her down on the grass after dragging her away from the tents. brian, who is currently on crutches due to sciatica most likely caused by previous police assaults, was also manhandled away from the tents, while officers crawled in and scrabbled around amongst personal possessions and legal documents.

the PACE section 17 legislation allows a search under extraordinary conditions "for the purpose of saving life or limb or preventing serious damage to property".

after witnessing officer CW3733 taking a cursory glance under the green tarpaulin at the rear of brian's current display, i asked him what exactly he was searching for. the reply - "items that might be of use to terrorists".

"in that case", i responded, "i don't feel that you've done a very good search. if you are seriously concerned that there may be 'terrorist items' here, i'd expect more than a quick glance".

he lamely replied that they were only looking for things that might have been added 'in transition'. i suggested that this wasn't a real search at all, but a means of harassment, and he walked away without further comment.

if the police were really concerned about "saving life or limb or preventing serious damage to property", i think there would have been a public cordon, and perhaps some sniffer dogs. this was a sham exercise designed to provoke fear - a pathetic show of force with no legal backing.

if the police were sure that they were executing their lawful duty, there is no way that brian, and barbara in particular, would have escaped arrest for their behaviour. they both did whatever they could to obstruct the officers and even used force against them. the fact there were no arrests shows that the cops plainly knew any charge would not stick in court, as they were plainly not acting lawfully.

this pattern of unlawful force was also seen earlier this same day when barbara used her megaphone outside the carriage gates as ministers arrived for PM's question time.

she was shouting to the public about how peter mandelson has been made a secretary of state while he is an unelected person. he stepped down from his hartlepool constituency after the scandal over favours to the hinduja brothers and their passpot application. he is not yet in the house of lords, although he has been promised this. so he is currently not a member of either house, is a disgraced ex-member, and yet has been appointed to a position where he can sign off legislature. we call this democracy!

anyway, police tried to rip her megaphone away from her, but it was firmly attached. they cited no law, and instead stole her batteries. once all the MPs were in, they returned the batteries, but refused to give any lawful reason for their actions. they did however manage once again to twist and injure her arm and wrist.

in the absence of any law, thuggery is used.

the parliament square peace campaign (now continuous for more than seven years) continues, and brian will be 60 years old before christmas.

- when the police arrived they did not identify what they would be searching for, and they did not seek permission. there was also no record made of the "search"

- the most striking example of police stealing property from parliament square campaigners was of course the night they raided brian's display on the 23rd may 2006. court cases have since established they had no right to do so. no record was made of what they took, even though it included several prized artworks by banksy and others, and to date the items have not been returned. on that night, several peace campaigners were arrested for obstructing police officers, but it was later shown in court that the police were not in the execution of their duty and so all the campaigners were acquitted

- megaphones have been stolen by police on previous occasions. again, no legal right has ever been established, court cases have collapsed, and yet, at least one megaphone remains unlawfully in police hands