The Director General of Police of the Indian state of Chhattisgarh, Vishwa Ranjan, faced intense questioning at a Conference on Indian Democracy: Justice and the Law held at the University of California, Berkeley. He admitted that arresting documentary filmmaker Ajay T.G. may have been a “mistake,” and signed a postcard supporting the release of imprisoned civil rights leader Dr. Binayak Sen. 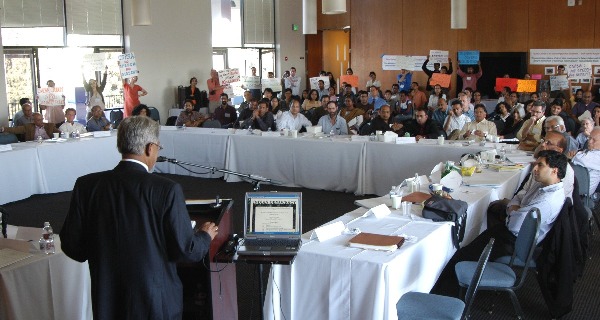 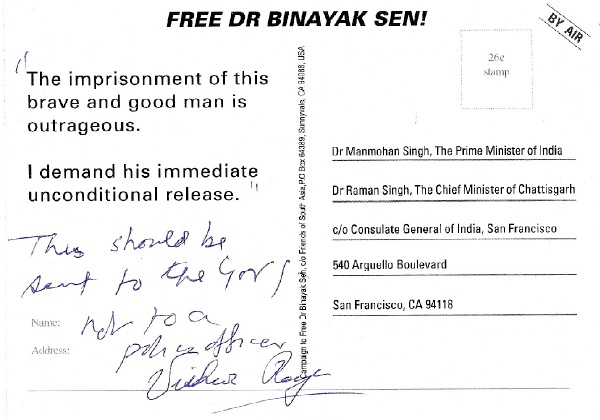 Panel on Justice and the Law in Chhattisgarh. 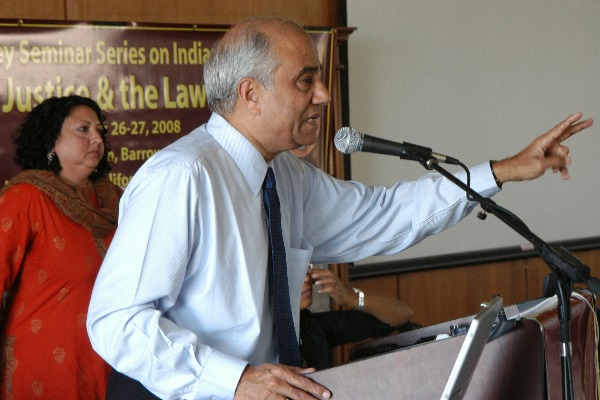 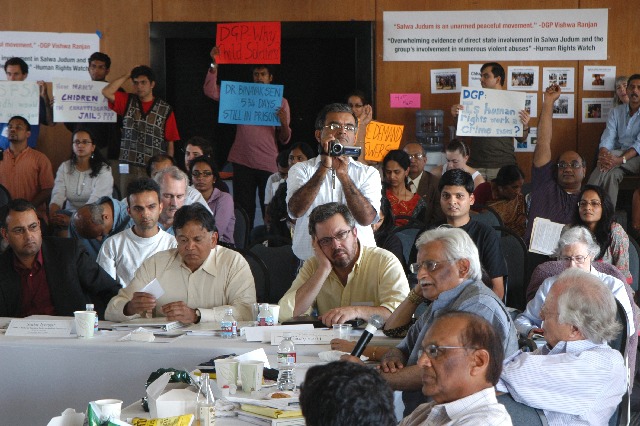 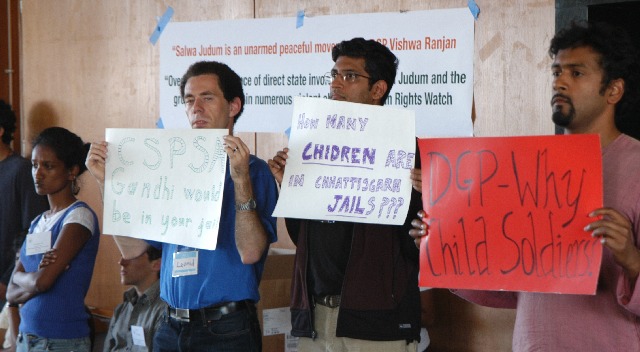 Call to end repressive laws and their application on children. 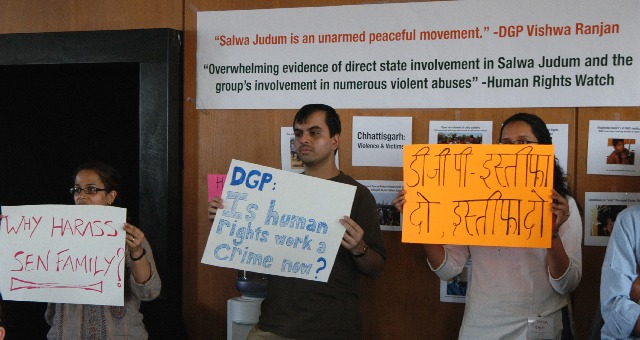 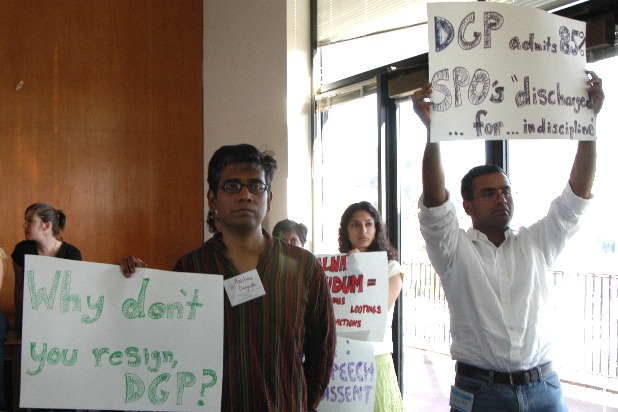 From a region of India with a long history of human rights abuses and state-sanctioned gangsterism, the highest police official of the state of Chhattisgarh faced a barrage of probing questions from fellow panelists and the audience at an international conference held in Berkeley, California. Students, faculty and members of a coalition of South Asian community groups demanded explanations from the Director General of Police (DGP), Vishwa Ranjan, about the arrests of civil liberties activist Dr. Binayak Sen, filmmaker Ajay T.G., and many others, and police support for right-wing vigilante groups in remote southern districts of the state.

During the question and answer period following the panel discussion on “A Case Study of Chhattisgarh,” Vishwa Ranjan admitted that the arrest of filmmaker Ajay T.G. may have been a “technical mistake.”

However, he deflected questions on the continued incarceration of Dr. Binayak Sen in Raipur Jail by saying that was the responsibility of the Chhattisgarh state government, not of the police. Dr. Sen is the national vice president of the People’s Union for Civil Liberties (PUCL, www.pucl.org) and the general secretary of its Chhattisgarh state unit. For the past three decades, he has been a highly-acclaimed activist, medical doctor, and social worker serving the impoverished Adivasis (tribal peoples) who inhabit the southern region of the state.

In an apparently hasty attempt to placate his critics, Mr. Ranjan signed a postcard to Indian Prime Minister Manmohan Singh urging Dr. Sen’s release. The card he signed reads, “Free Dr. Binayak Sen! The imprisonment of this brave and good man is outrageous. I demand his immediate unconditional release.” Ranjan added a note, “This should be sent to the govt., not to a police officer.”

Students and community members attending the conference silently carried signs asking, “Is human rights work a crime now?” and protesting against children being held in police custody, a Chhattisgarh superintendent of police accused of rape and murder, and the ongoing harassment of Dr. Binayak Sen’s family. Anirvan Chatterjee of the Alliance of South Asians Taking Action (ASATA) handed the DGP a letter signed by 106 academics from many universities across the U.S.A. calling on him to stop supporting vigilante violence in Chhattisgarh, drop all charges against political prisoners, and release them unconditionally. He also gave the DGP a petition signed by 1500 people demanding release of Dr. Binayak Sen.

Community members also demanded that the Salwa Judum vigilante militia be disbanded, the draconian Chhattisgarh Special Public Security Act (CSPSA) of 2006 be repealed, and the use of child soldiers in counter-insurgency measures be abolished.

The Conference on Indian Democracy: Justice and the Law, organized by the University of California’s Center for South Asia Studies and sponsored by the Foundation for Democratic Reforms in India (FDRI), was held on 26-27 September 2008 in Berkeley. It included a two-hour session on law and justice in the Indian state of Chhattisgarh. The panel consisted of Justice B.N. Srikrishna (former Justice of the Supreme Court of India), Vishwa Ranjan, Nandini Sundar (Professor of Sociology, Delhi School of Economics, Delhi University), Sunil Kumar (Editor of the daily newspaper Chhattisgarh and the weekly magazine Itwari Akhbar), and Dipti Bhatnagar (UC graduate student with Students for Justice in Chhattisgarh).

Chhattisgarh’s mineral-rich southern districts of Dantewada and Bastar are the sites of ongoing conflict between Naxalites (Maoist insurgents) versus state security forces and the Salwa Judum backed by the right-wing Bharatiya Janata Party (BJP) government in Raipur. It is estimated that counter-insurgency programs have displaced some 300,000 tribals from their villages. The state security forces and Salwa Judum have been implicated in many cases of extrajudicial killings, torture, rapes, extortion, and theft from Adivasis according to the PUCL, People’s Union for Democratic Rights (PUDR, www.pudr.org), Human Rights Watch (hrw.org), and other groups. Human rights activists criticizing government policies, journalists reporting on state atrocities, and tribals resisting forced dislocation have been aribitrarily detained, harassed, imprisoned under the CSPSA, and accused of collaborting with the Naxalites.

Dr. Binayak Sen has been imprisoned in Raipur Jail since May 2007, despite calls for his release from Nobel laureates, Amnesty International, national and international organizations of physicians, and thousands of individuals from around the world. Ajay T.G., who made a documentary film about the circumstances surrounding Dr. Sen’s arrest, was himself arrested by Chhattisgarh police in May 2008, but had to be released after 93 days in jail because the police were unable to produce a charge-sheet. Five months after his arrest, although out on statutory bail, the charges against Ajay have neither been filed nor dropped.

Justice B.N. Srikrishna reasoned that there was no role for vigilante militias in a democracy, and that questions of whom should be punished and how are only for a court of law to decide, not private citizens.

DGP Vishwa Ranjan cited photos of mutilated bodies, property damage, and population displacement as evidence of alleged Naxalite brutality justifying police actions and the recruitment of special police officers (SPOs), citizens (many of them under-aged children) who are given minimal training and pay to create an extension of the regular state police. He defended the Salwa Judum’s “peaceful” and “spontaneous” nature, despite widely-accepted evidence to the contrary, including a recent report by Human Rights Watch enumerating numerous violent abuses by the militia.

Nandini Sundar challenged Vishwa Ranjan’s description of Salwa Judum, showing how violence and killings have soared since the militia was created in 2005. She traced the collusion of the state in supporting and arming the Salwa Judum, citing widespread cases of terrorism, murder, rape, arson, and theft committed by vigilantes affecting over 600 villages. She also talked about the increase in Naxalite attacks on the “refugee” camps in the past three years because the camps are under the control of the Salwa Judum, and on schools because the police occupy schools for bases of operations.

Sunil Kumar claimed that human rights activists are “disconnected from civil society” when they only speak out against violence by the state and disregard Naxalite violence. He was later challenged by Nandini Sundar who reminded him that when she had written a letter earlier this year criticizing both the Naxalite blackout in Bastar and the Salwa Judum violence, all newspapers in Chhattisgarh, including Sunil Kumar’s Chhattisgarh, had refused to print it.

Dipti Bhatnagar highlighted specific cases, such as the fabrication of evidence in the trial of Dr. Binayak Sen, the arrest of documentary filmmaker Ajay T.G. without producing a charge-sheet, and the tacit complicity of police with the Salwa Judum when it exacted revenge on residents of Nendra village in Dantewada district for testifying against it before the National Human Rights Commission. She asked the DGP why the state security forces do not defend villagers from repeated Salwa Judum attacks. He responded by saying that the cases are investigated by police when complaints are filed.

Rajeev Dhavan, senior advocate at the Supreme Court of India, started the question and answer session by challenging Vishwa Ranjan’s assertions as “misleading and wrong.” He questioned why the Chhattisgarh state government was so intent on ensuring that Dr. Binayak Sen would never be released in view of the very circumstantial pretexts for his arrest. He charged the DGP with “massive obfuscation of the facts” of the case, and demanded his resignation.

In response to a question about the specific charge under which Dr. Binayak Sen was arrested, the DGP only said that the charges were about providing “some kind of logistical support” to Naxalites. When pressed to enumerate the charges, he refused, saying that the case was before the magistrate. Claiming that he had nothing to do with Dr. Sen’s imprisonment since the arrest occurred before he became the DGP of Chhattisgarh, he called on Dr. Sen’s supporters to petition the government, not the police.

When asked about recruitment of child soldiers as SPOs contrary to the Rome Statute of the International Criminal Court, Vishwa Ranjan replied that the police do not deliberately recruit children, but go by whatever age is claimed by the applicant. Reports by several independent organizations – including Human Rights Watch, Forum for Fact-finding Documentation and Advocacy (FFDA, www.ffdaindia.in), and Asian Centre for Human Rights (www.achrweb.org) – indicate that substantial numbers of children are being employed by the state as soldiers because the police have taken no steps to verify the ages of the SPOs.

Contrary to the unsubstantiated claims of Vishwa Ranjan and Sunil Kumar that Adivasi villagers have been fleeing Maoist harrassment, Nandini Sundar through her fact-finding investigations observed that more people have been displaced by Salwa Judum terror and that popular support for the Maoists has actually increased since the Salwa Judum violence began in 2005.

The conference concluded with wide-ranging comments on the need for reform and maturation of India’s institutions of democracy, law, justice, and the police. Yet only one panelist, Siddharth Varadarajan, deputy editor of the Hindu newspaper in New Delhi, mentioned that this state of affairs must be viewed in its “political economic context.” Democracy, law, justice, and the police are not socially neutral in the context of state power, for state power itself is the rule by one or more classes over others. Despite plural participation in the institutions of governance, these are moulded to favour to the interests of the ruling elites. The central issue, then, is not simply one of institutional reform and maturation, but rather of systemic empowerment of the working classes, and of the disadvantaged castes and tribes.