If "That One" Wins

All the contradictions of America's white supremacist history converge on
November 4, when a society drenched in racism tries to figure out which of
its "selves" will pull the lever. Lots of whites seem to be profoundly
confused. "A recent poll indicated that many white people, including some
who claim to support Obama, continue to hold very negative opinions about
black people, often viewing them as `violent,' and `complaining.'" But Obama
solves the problem, since his "refusal to directly address the needs of
black people is also appealing to white people." Other whites are more
straightforward. If your car sports an Obama sticker, they won't let you
park. 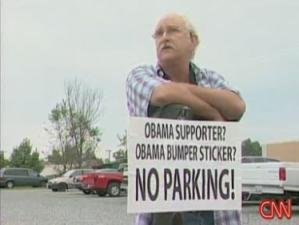 How will white people react if Barack Obama is elected the 44th president of
the United States? Every poll shows Obama leading John McCain with just
three weeks to go before election day. More importantly, he is leading in
the states that John Kerry won four years ago, and may be able to add some
of the states that Kerry, and other Democrats, were unable to win.

Obama's success at getting the votes of millions of white people does not
change the fact that the United States is still very racist. A recent poll
[1] indicated that many white people, including some who claim to support
Obama, continue to hold very negative opinions about black people, often
viewing them as "violent," and "complaining."

The response to the worldwide economic meltdown that was engineered by
wealthy and powerful white people is now being blamed on black Americans. As
the new talking point goes, undeserving black people caused worldwide
financial markets to crash when they defaulted on home mortgages. It is a
supreme irony that a black man is on the verge of becoming president, while
the rest of black America is caught in the familiar role of scapegoat for
the nation's troubles.

Obama is truly admired, even loved, by many white people. His appeals to
hope and change are indeed potent. The consultants who marketed those
phrases certainly knew the power behind them. Obama's refusal to directly
address the needs of black people is also appealing to white people. They
can support him without having to change the bigoted attitudes they still
hold against other black people.

"Many white people, including some who claim to support Obama, continue to
hold very negative opinions about black people."

However, it has to be pointed out that lofty campaign talking points can't
placate people who are proudly and openly racist. They still don't to see a
black person in the position of ultimate political authority, not even an
eloquent, biracial, photogenic politician who never addresses black people's
needs and who even has a white grand mother to trot out at convenient times.
The very idea that a black man will be president makes these people very,
very angry.

Hillary Clinton attempted to tap into these sentiments and John McCain does
now. Clinton made it clear her campaign was appealing to "hard working
people, white people." McCain's running mate, Sarah Palin, uses Obama's
middle name, Hussein, at every opportunity and sneers about community
organizing, which doesn't really describe the social work that Obama did,
but the anti-black sentiment is clearly understood by the audience for whom
it is meant. In the first presidential debate John McCain refused to look
Obama in the face. The second debate ended without a hand shake between the
two, but that was not the most memorable moment. When McCain referred to his
opponent as "that one" he was telling his most racist supporters that he
shared their disdain and anger at the thought of an Obama presidency.

The parking lot owner in North Carolina who refuses to park cars [2] with
Obama bumper stickers didn't get the peace, love, harmony and post-racial
memo. He probably wouldn't want a white Democrat to be president, and now he
is particularly galled that a black Democrat may be president. He will be a
very angry man if Obama is inaugurated in January.

He will blame black people for the mortgage crisis and for every other
crisis in the world. Ironically, so will some of the white people who vote
for Obama. His strategy of distancing himself from black people allows them
to support him while still heaping disdain on the rest of black America.
Obama appeals to many white people precisely because of his own denunciation
of black demands for justice, or even the memory of past injustice. Rev.
Jeremiah Wright knows that all too well.

"Obama appeals to many white people precisely because of his own
denunciation of black demands for justice."

The racist attacks directed at Obama pose a terrible dilemma. The primary
one being that he doesn't acknowledge that racism exists. It has
disappeared, bringing black people "90% of the way" towards equality.

If "that one" wins, black people will be very, very happy. The joy will be
short lived when the political need to please white America, whether Obama
supporters or not, takes precedence over the unrequited love that came
Obama's way. Black America is facing an ugly reaction from white people
angered because the commander-in-chief is black. White Obama supporters will
be able to wash their hands of responsibility for righting America's wrongs
because they cast their ballots for a black man.

Black people will face hard times in an Obama presidency. There will be no
defense when the beat down begins. Why should there be? Violent, complaining
people ought to be punished. They deserve nothing else.

Margaret Kimberley's Freedom Rider column appears weekly in BAR. Ms.
Kimberley lives in New York City, and can be reached via e-Mail at
Margaret.Kimberley(at)BlackAgandaReport.Com. Ms. Kimberley maintains an
edifying and frequently updated blog at freedomrider.blogspot.com [3] . More
of her work is also available at her Black Agenda Report archive [4] page.