Following on from their particularly colourful and attention grabbing demo in June see:

The Smash EDO/MBM/ITT campaign called another march in Brighton. 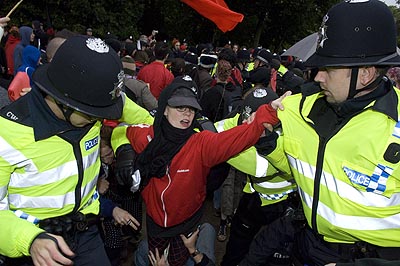 Scuffles at the very begining. 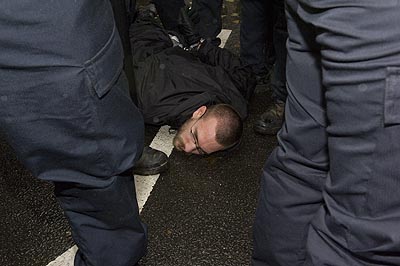 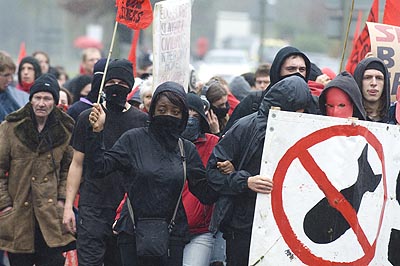 Here comes the rain and the smash EDO campaign. 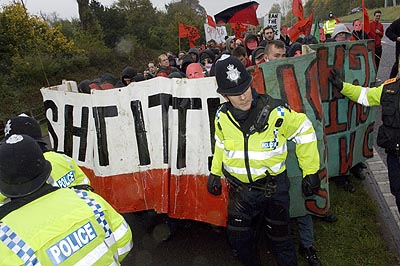 The Police try to direct the march. 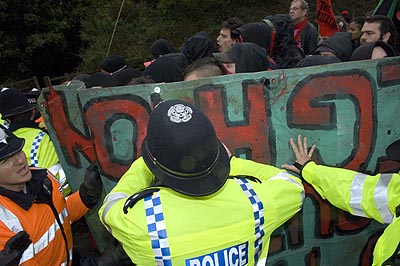 The Police try harder to direct the march. 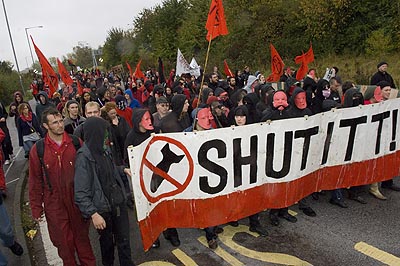 The march goes its intended route despite police efforts. 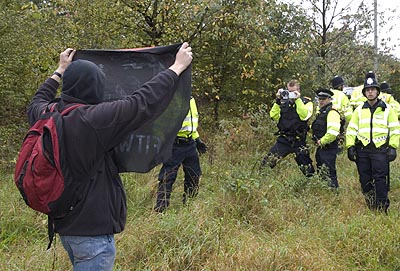 Protester helps the Police get a good shot of his banner. 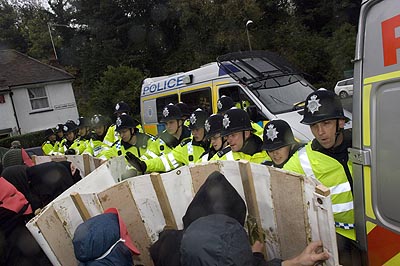 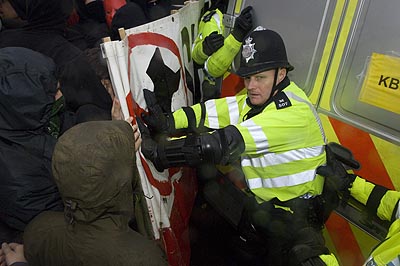 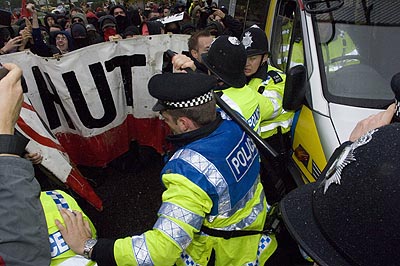 Out come the batons.

Over 400 people gathered in Brighton on a very wet Wednesday in the latest protest called by Smash EDO against local bomb factory EDO MBM/ITT. The last demo, in June (See SchNEWS 634), saw protesters invading the factory grounds and smashing windows. This time the cops were determined to have an overwhelming presence. At noon Sussex University campus was occupied by large gangs of cops as people arrived at the demo’s start point at the uni entrance.

Police tactics soon became obvious. As the crowd gathered they issued a Section 60 notice, giving them the power to remove masks. Trying to stamp their authority, they quickly set about the gathering crowd demanding people remove any kind of face covering, photographing everyone and generally using any tactics to intimidate, attempting to seize banners and alienate as many onlookers as possible.

Initially shocked – the mob soon found the resources to fight back and just after midday the march burst into life. The red and black-clad crowd sprang into action to the rallying call “Get behind the banner”. Behind the sturdy, massive SHUT ITT! banner – reinforced with a wooden frame – and waving flags, the noisy bloc moved at pace through Stanmer Park and out onto the Lewes Road, filling both lanes.

At least ten pairs of police evidence gatherers with long lenses, video cameras and spotter cards, including the Met’s Forward Intelligence Teams (FIT) were in evidence from the start but spent most of the march foiled by FIT Watchers (See SchNEWS 639). Hundreds of copies of FIT Watch’s spotter cards were distributed complete with photos, names, numbers and descriptions of FIT police likely to be in attendance. Whenever FIT teams appear, shouts of ‘Block That Shot’ is becoming a call to arms for activists sick of only being able to protest whilst constantly under surveillance.

Multiple sound systems and makeshift instruments kept spirits up in the procession towards the factory. Police seemed to have taken a leaf from the anarchist book and handily blockaded the whole of Lewes Road for several hours, with 8 vans bumper to bumper, urging people towards their sanctioned ‘protest pen’ at the bottom of Home Farm road. Unsurprisingly the idea of being herded into a massive steel cage surrounded by a sea of fluorescent baton wielding cops didn’t appeal to anyone. Determined to march on, people surged towards the police lines, pushing the cops back behind their line of vans. Heavy use of pepper spray and batons on those at the front took the sting out of the crowd, who, nursing bruised bodies and the ill effects of an impromptu chemical eye-bath at the hand of Sussex’s finest, split into two groups.