British Climate Camp activists have taken their campaign to stop the building of a coal-fired power station in Kent, UK, to the Energy headquarters of E.ON in Munich, Germany. 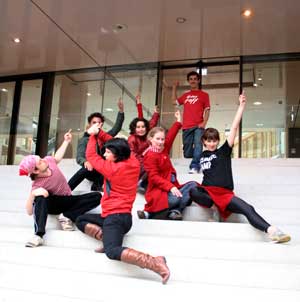 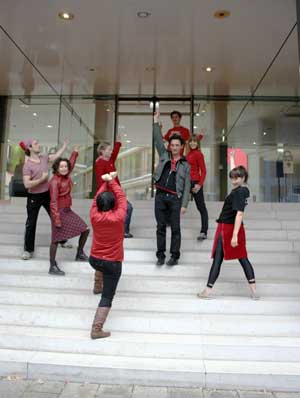 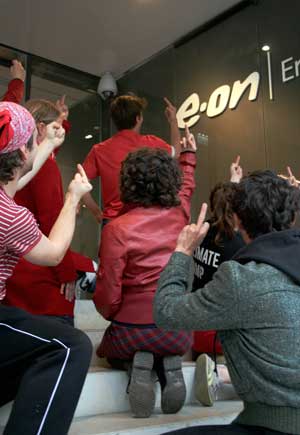 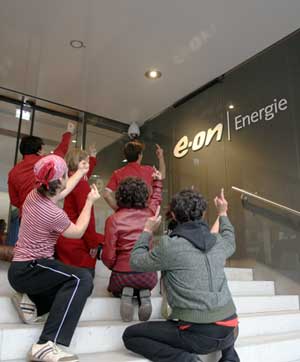 British Climate Camp activists have taken their campaign to the Munich offices of E.ON.

British Climate Camp (1) activists have taken their campaign to stop the building of a coal-fired power station in Kent, UK, to the Energy headquarters of E.ON in Munich, Germany (2).

This morning activists involved in the UK Climate Camp coordinated a ‘flash mob’ style action at the office of E.ON Energie. Dressed in splashes of E.ON red, around thirty people swamped the main entrance of the office to give E.ON the finger. Playing on the ‘E.ON F.OFF’ logo (3) from this summer’s Climate Camp the group held their middle fingers in the air, sending a clear message that the multi-national is a target across Europe.

“This summer saw a plethora of highly effective actions against the energy major in the UK” explained Jimmy Hoover, one of the UK Climate Campers who travelled to Munich to coordinate the action. “We wanted to make it very clear to E.ON that its not just about one week in a field in Kent. We have the means and the motivation to take this campaign to stop Kingsnorth and new coal continue all the way home to E.On’s headquarters in Germany. Until the plans for this new coal-fired plant are dropped, we will drag E.On’s name through the mud and expose them for being the climate criminals they are.”

Since this summer’s third and largest Climate Camp, the group have openly stated their intention to return to the Hoo peninsula in Kent to prevent the building of a new coal fired power station, should it be given planning permission by the British government.

“When you’ve got the world’s top climate scientist Jim Hansen explaining that this one power station will make extinct up to 400 species (4), you’ve got to ask why E.On would still be pushing ahead with this act of climate vandalism,” added Mel Evans. “Its clear that E.ON has their profits in mind, rather than the public interest and climate security. With the British tax-payer looking likely to own a 60% stake in the Royal Bank of Scotland – who have provided loans to E.On to build Kingsnorth (5) - I for one don’t want my taxes being used to trash the climate. That’s why we’ve come here today to make sure they get the message loud and clear – E.On, F.OFF!”


For high res images go to

Notes to the Editor:

(4) James Hansen, NASA climate scientist, estimates that if the new coal power station at Kingsnorth in Kent goes ahead, it will result in 400 extinct species due to its contribution to climate change. www.guardian.co.uk/environment/2008/sep/04/climatechange.fossilfuels

(5) In 2007, RBS-NatWest took part in loans to E.ON, the company planning to build Kingsnorth, totaling $70 billion.