More than forty people demonstrated outside the Institute of Engineering and Technology in Savoy Place in support of Colombian cleaners unfairly dismissed by the cleaning company Amey. There was a simultaneous demonstration in Bristol outside Amey’s offices there. 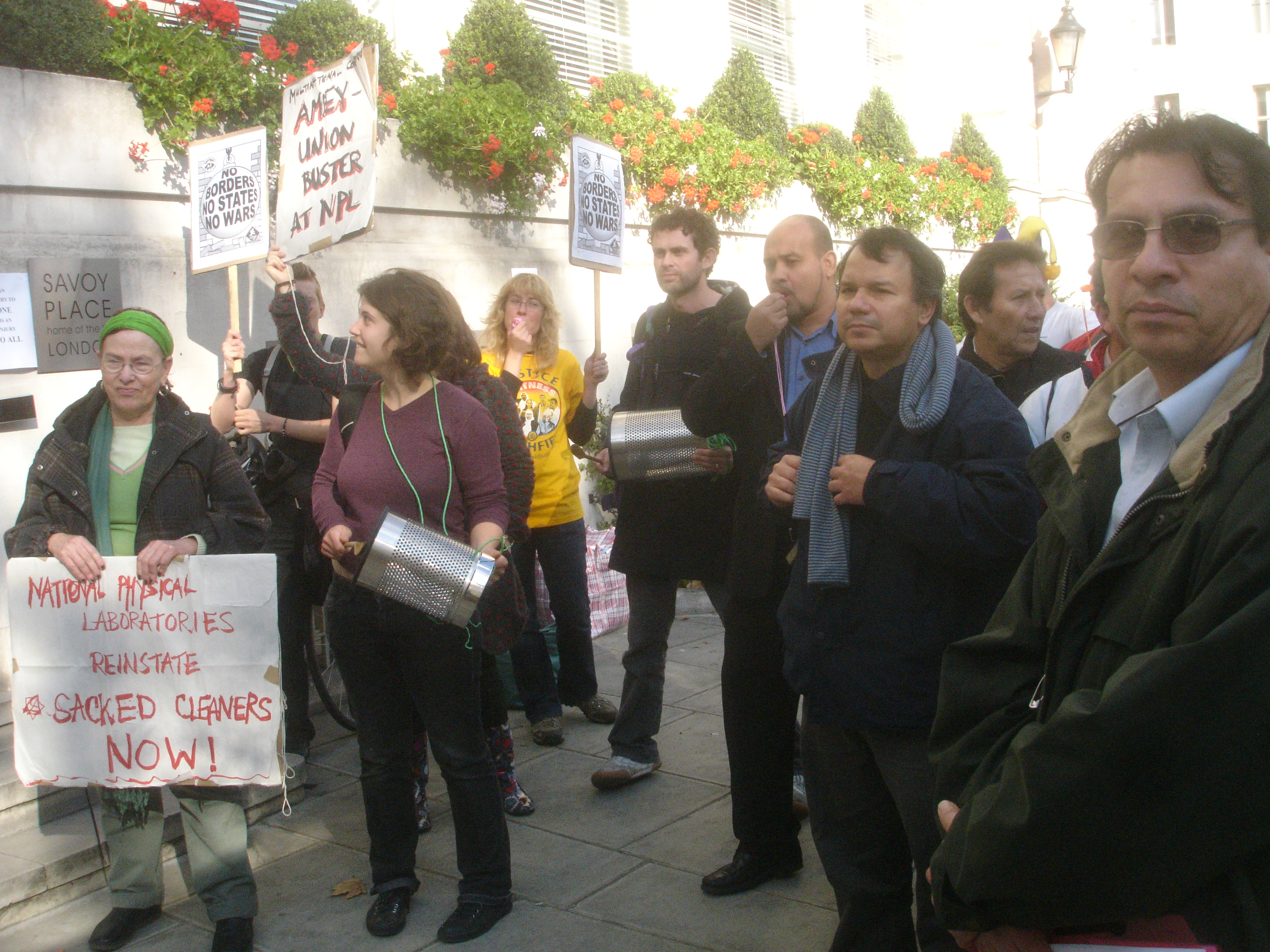 One of the sacked cleaners and a former trade unionist in Colombia, Julio Mayor, said:

The cleaners, who are members of the Prospect and Unite unions, had been working for the company since it took up the contract at the government’s National Physical Laboratory in Teddington, Middlesex. The protest is timed to coincide with the 25th Intelligent Sensing Programme, an international conference supported and advertised by the National Physical Laboratory.

They were suspended for criticising the company for putting an excessive workload onto ever fewer staff, for unilaterally changing working terms and conditions and for disrespecting grievance procedures. The five were sacked on 14th September 2008.

The cleaners were charged with bringing the company into disrepute after they sent a leaflet to other NPL staff explaining what was going on in the cleaning department and asking for their support, especially against victimisation and bullying they were facing from their manager.

Since Amey took over the contract in December 2006 the number of cleaners has been reduced from thirty-six to ten as the company has looked to cut costs wherever possible, in the process virtually getting rid of the living wage won by the original workforce. Four of the current ten are temporary workers being paid the minimum wage.

In May 2007 two workers were deported to Brazil and one to Colombia after Amey called in the Home Office to check the immigration status of workers who were active in the cleaners’ union.

Amey, which posted a £75 million net annual profit, is a majority shareholder in Tubelines, which cleans parts of the Underground. Tube cleaners who went on strike for a living wage this summer were faced with paper checks, immigration raids and deportations to countries including Sierra Leone and the Congo.

There will be further actions outside the Amey offices in Farringdon and Colindale next Wednesday and Thursday. Please e mail for more details. 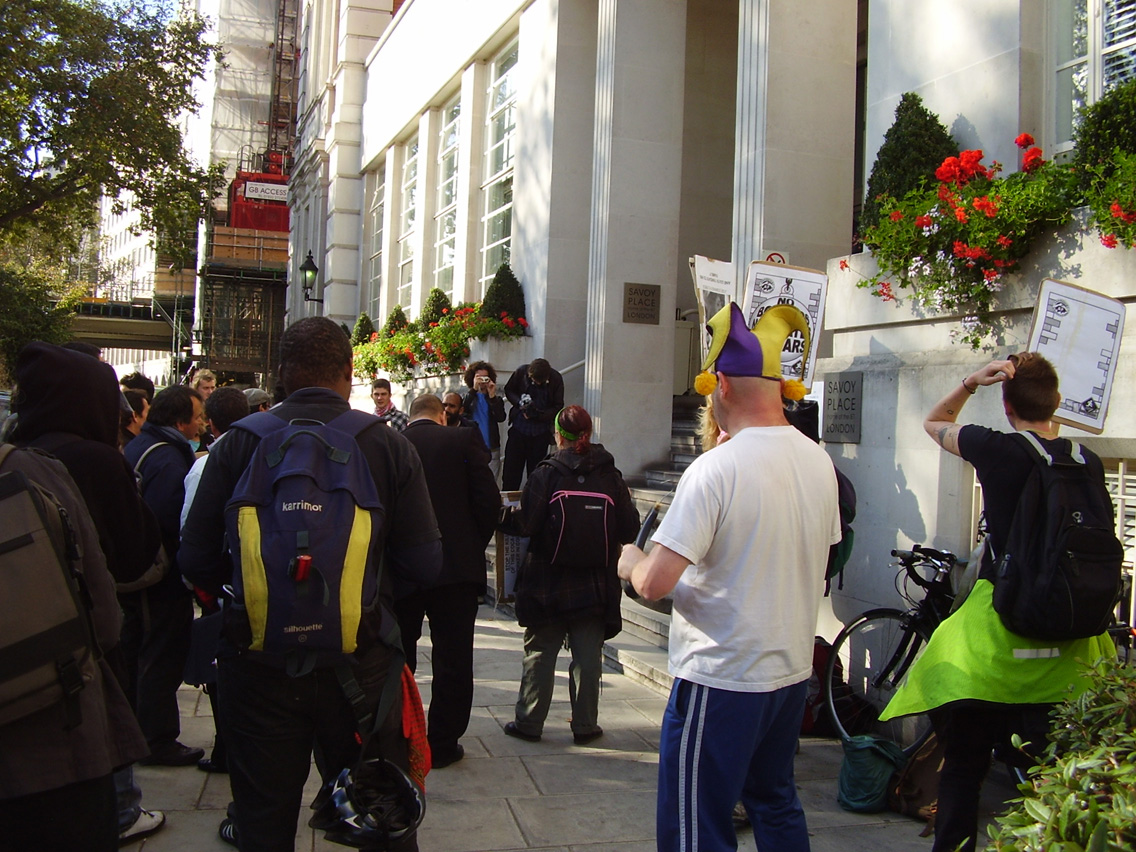 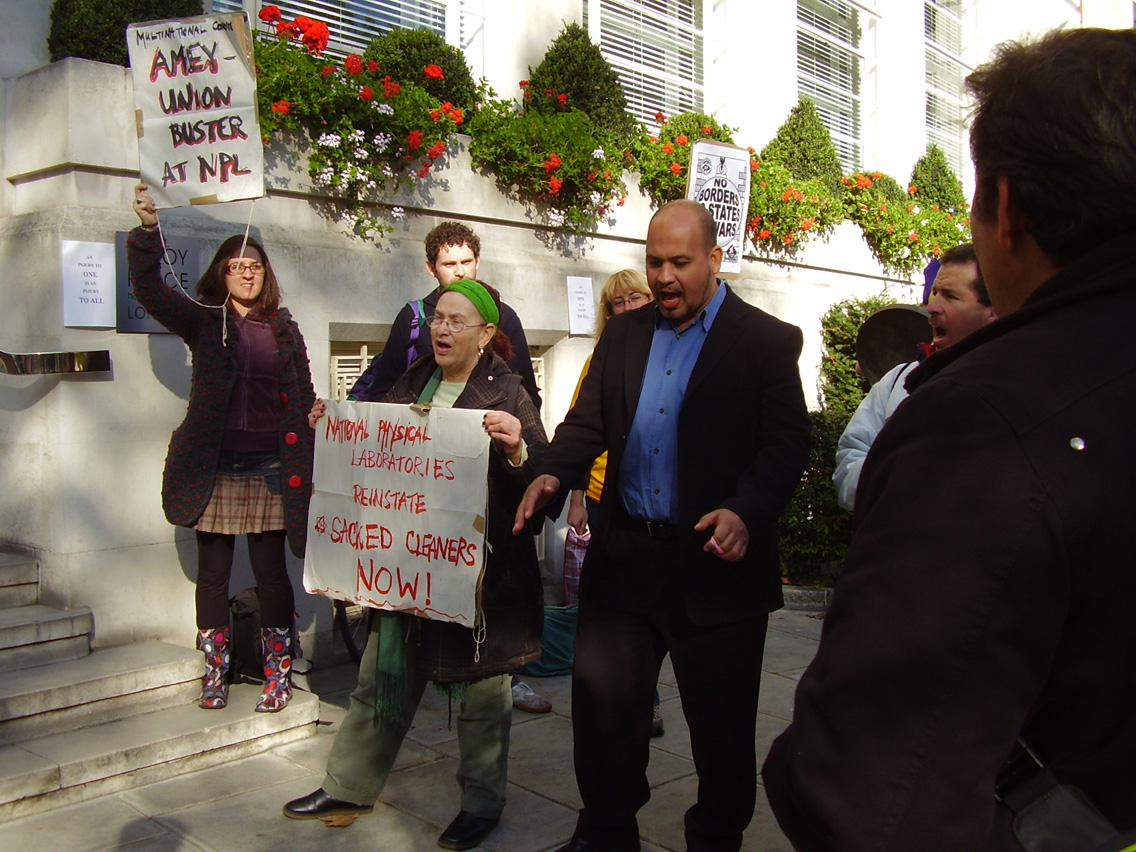 That was a really good picket, with loads of energy. Hopefully keeping the pressure on will get the jobs back. Try and come to the pickets next week! :)

Adding to the above...

It's very important to highlight the presence of the Latin American cleaners who work at Schroeders who attended the demo in support of the NPL/Amey five. Some of the sacked NPL/Amey workers attended the autonomous demo that the Schroeders activists organised the week before, and the Schroeders workers came yesterday to return that support.

If this struggle will continue and grow, it's because of the existence of these ties of mutual solidarity among migrant workers themselves.