Students at the University of Nottingham protested "unethical career corporatism" at the university's careers fair on Monday and Tuesday. Dressed as grim reapers, students payed a visit to arms dealers BAE Systems, Rolls Royce and Qinetiq, as well as energy giants E.On and BP. Leaflets detailing the crimes of some of the companies were hounded out and the protesters even had a stall next to the Army's stall.

The protesters aimed to highlight the hypocrisy of organisers, AIESEC, who claim to embody "Peace and fulfillment of humankind's potential" whilst giving a platform to arms dealers, as well as to "oppose the general presence of mechanisms of the capitalist death machine." Their success was highlighted by the noteable absence of several targetted companies on the second day of the fair. 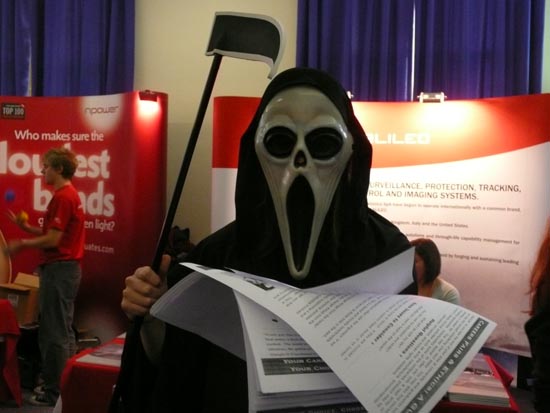 Protesters had a stall from which to desseminate literature including alternative careers guides. The students later commandeered the neighbouring Army stall whilst their representatives were on a break and invited students to "join the imperial death machine".

Students participating in the activity were threatened at various points by the university's security force. They were told not to flyer near the stalls, told that the police were going to be called to deal with them, told to remove their 'intimidating' masks and asked to stop filming. The threats turned out to be empty and students were eventually allowed to continue with the protests which were taking place in the Student Union's Portland Building.

Representatives of some of the arms dealers admitted that the students were doing the right thing and one confessed to feeling guilty about doing his job. One BAE representative was even heard to shout "Free Palestine!"

Students are also involved in an ongoing campaign to persuade the university to disinvest in the arms trade.