Manchester students and residents dumped coal on the Royal Bank of Scotland and E-On recruitment stalls last Thursday 23rd October to protest against their ongoing finance and expansion of the fossil fuel economy. 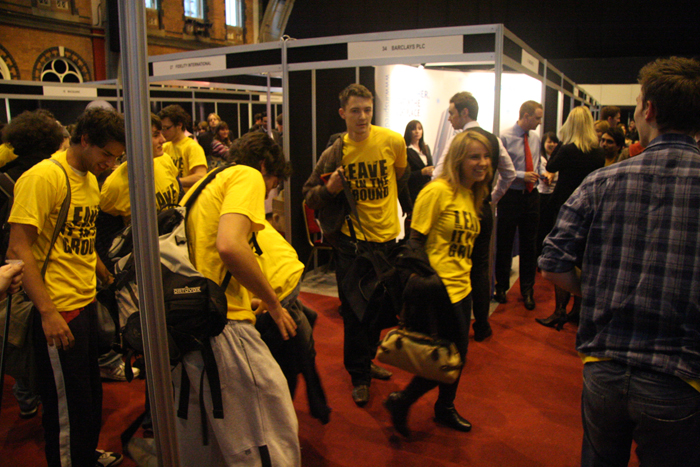 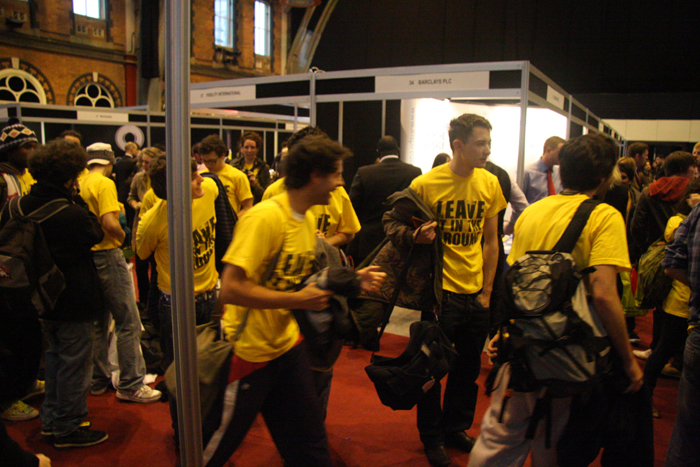 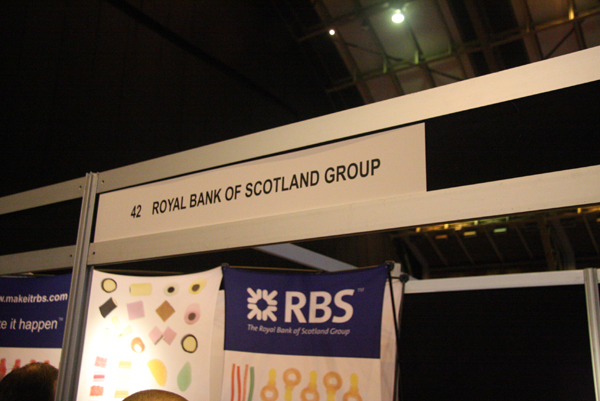 for the Royal Bank of Scotland Recruitment stall 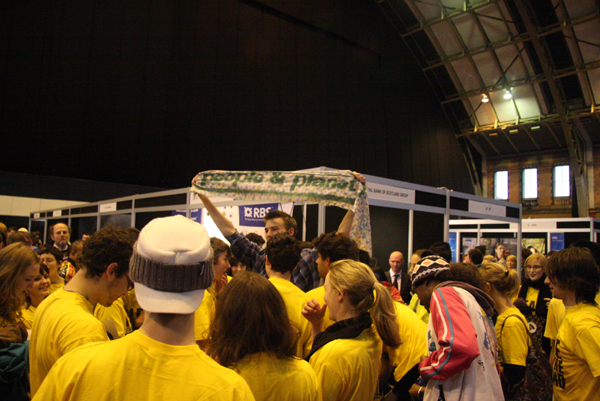 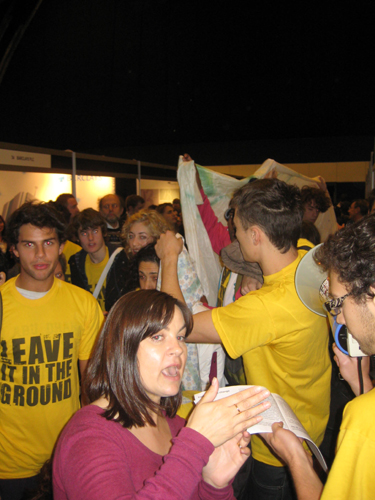 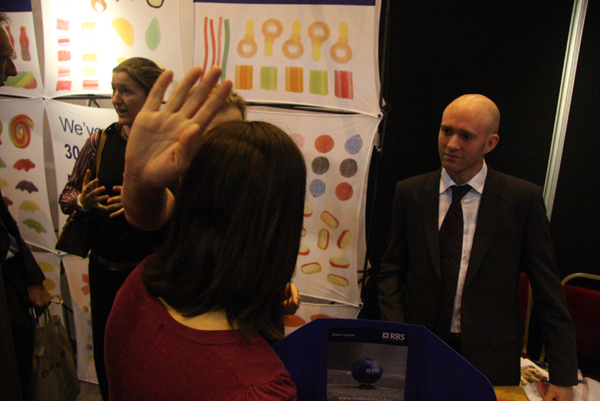 Talk to the hand...RBS' not listening 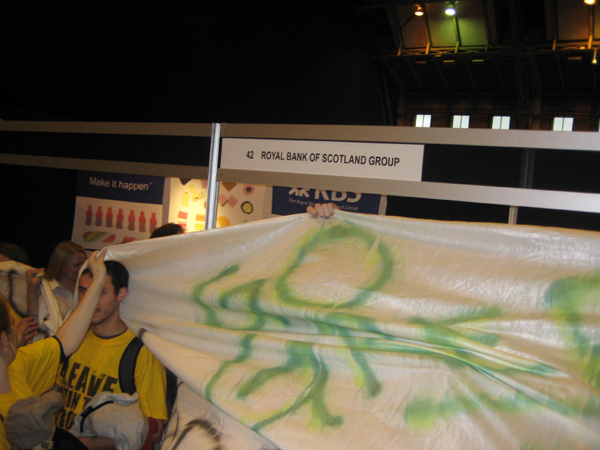 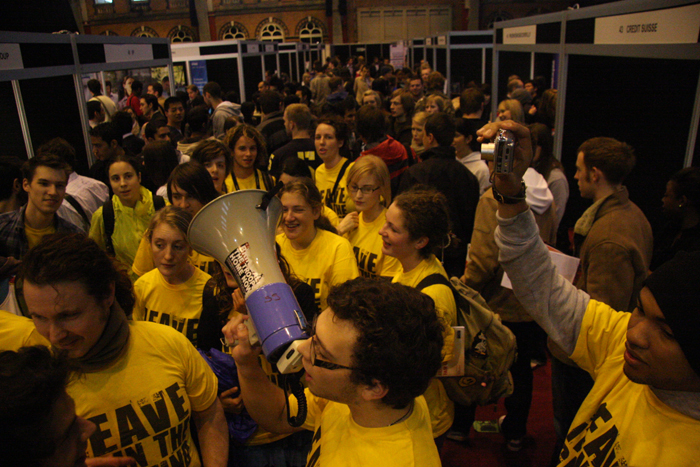 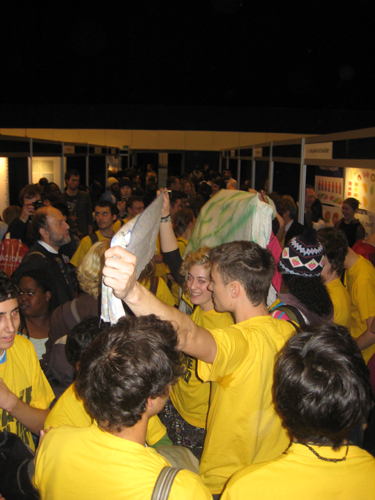 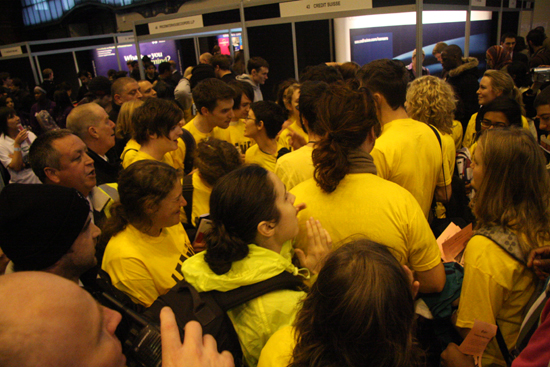 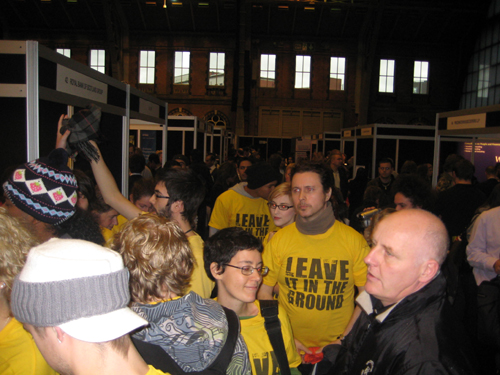 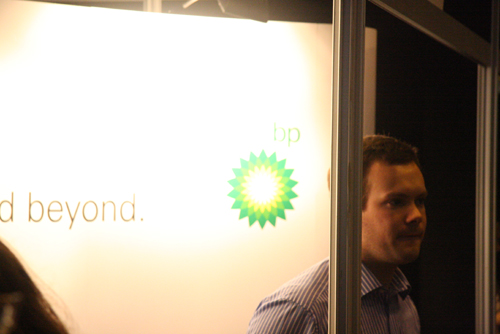 BP were there...but they're Beyond Petroleum 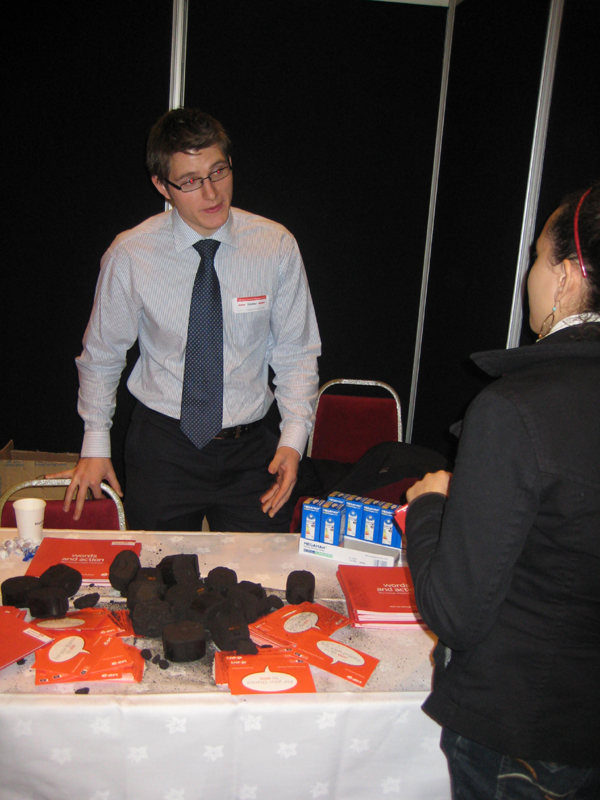 some coal for the E-On recruitment stall 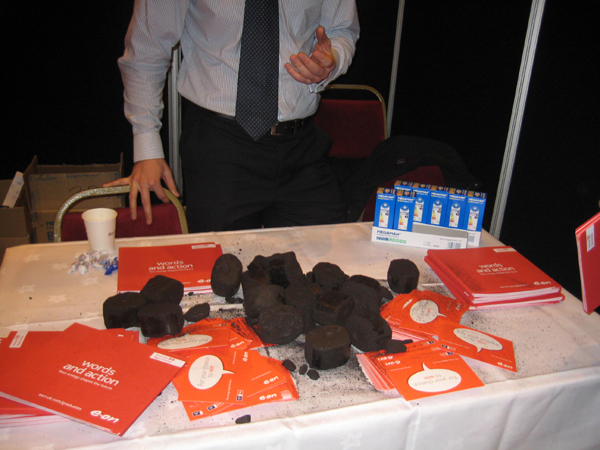 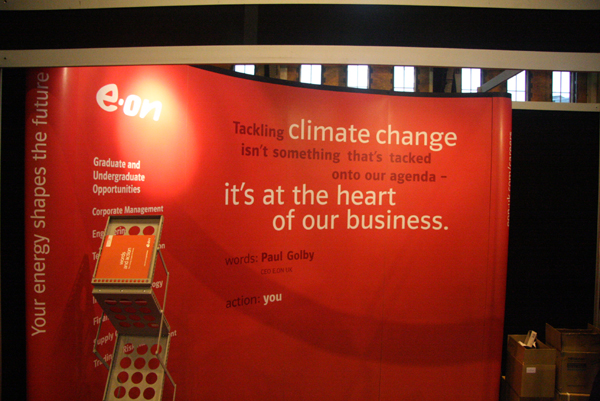 Over 50 Manchester students staged a flash mob demonstration at the RBS and E.On Recruitments stalls on Thursday 23rd October 2008. The group were protesting against the banks funding of climate chaos and against E.On’s plans to build a new coal power station at Kingsnorth.

At precisely 1pm, loose coal was dumped on the Royal Bank of Scotland and E-On recruitment stalls. Meanwhile, around 50 demonstrators stripped off their jackets to reveal bright yellow t-shirts with the words, “LEAVE IT IN THE GROUND” emblazoned across their chests.

A list of RBS’ environmental crimes was then read out to prospective employees attending the recruitment fair at Manchester Central (GMEX) convention centre. [4]

Some of the group were then forcibly ejected by security guards whilst others moved on to pay a visit to the E-On recruitment stall. E-On were questioned as to how their plans for a new coal fired power station squared with our commitment to reduce CO2 levels.

Toby Brett, 19, physics student at the University of Manchester says, “RBS, formerly priding itself on being “the oil and gas bank”, vastly outstrips all other UK banks in terms of funding climate change. In fact RBS investments emit more carbon dioxide per year than the whole of Scotland.”[6]

“Whilst I commend them for investing in renewable forms of energy as well as fossil fuels the two simply do not cancel out.”

“We are calling for an immediate halt to highly destructive investment such as in tar sands extraction and a swift switch to renewables. Quite frankly the world cannot wait.”

Marina Gerner, 20, Politics, Philosophy and Economics student and campaigns secretary at the University of Manchester’s Students Union says, “Coal is the dirtiest, most emissions intensive of fossil fuels and it is outrageous to see how our banks invest in it.”

This action is part of a series of actions by students from the campaigning groups People and Planet and Campaigns Collective against RBS and E-On. [5]

It formed part of Climate Action Week at the University of Manchester Students’ Union.

1) “A flash mob is a large group of people who assemble suddenly in a public place, perform an unusual action for a brief time, then quickly disperse.” – Wikipedia


2) Climate change is the biggest threat to a secure future currently facing humanity. If current trends continue, average global temperatures could rise by 6.4˚C by the end of the century with devastating and permanent results for the planet. - “Summary for Policymakers”, Intergovernmental Panel on Climate Change, 2007


3) E-On plans to build the contentious new coal power station at Kingsnorth along with 17 other coal and gas power plants across Europe and Russia by 2010. RBS played a part in the $22 billion loan to E-On required to build these plants.


5) Other actions against RBS and E-On by People and Planet include a similar action at a careers fair in London on the 10th Oct.

http://peopleandplanet.org/navid6525
An action against Edinburgh University’s investment in RBS at the university’s fresher’s fair.

http://peopleandplanet.org/navid6381
A “die-in” outside RBS headquarters in London as part of this years Camp for Climate Action.

http://www.climatecamp.org.uk/home
On Monday 20th October students at Nottingham targeted amongst others the RBS and E.On stalls at a careers fair for their dubious ethical credentials. Dressed as Grim Reapers they explained that as a member of an organisation the employees are directly supporting and helping the actions of the organisation.


6) In 2007 RBS’ embedded emissions (emission due to its investments) was over 43 million tonnes, more than Scotland - PLATFORM, ‘The Oil and Gas Bank – RBS & the financing of climate change’,