A major blockade and protest is underway of the Atomic Weapons Establishment (AWE) at Aldermaston near Reading to mark UN Disarmament Week. The Aldermaston Big Blockade, organised by Trident Ploughshares and supported by the Campaign for Nuclear Disarmament (CND), Block the Builders and the Aldermaston Women’s Peace Camp [5] is seeking to disrupt work on existing Trident nuclear warheads and the facilities that will enable the development of their successors at Britain’s nuclear weapons research laboratory. 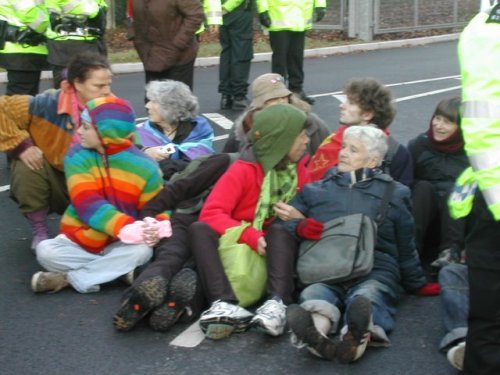 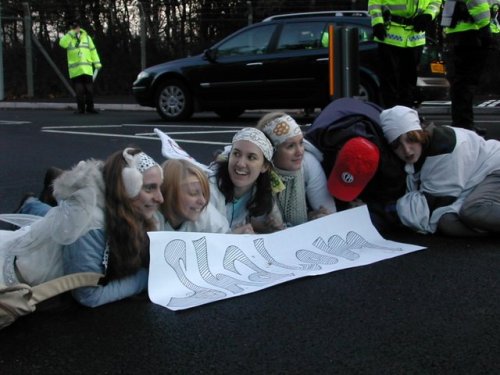 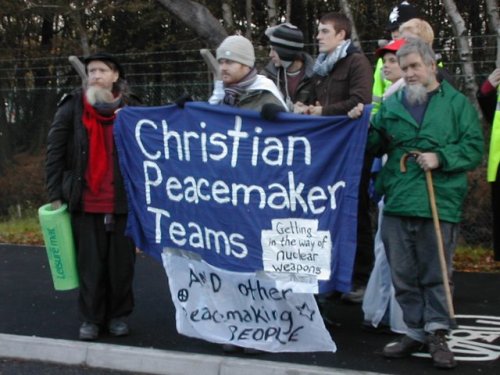 Christian peacemakers (and others) 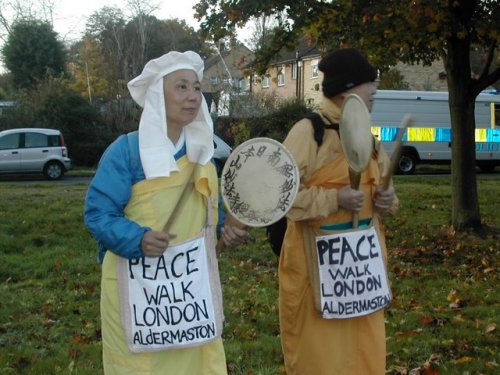 Buddhists who walked from London in the cause of peace 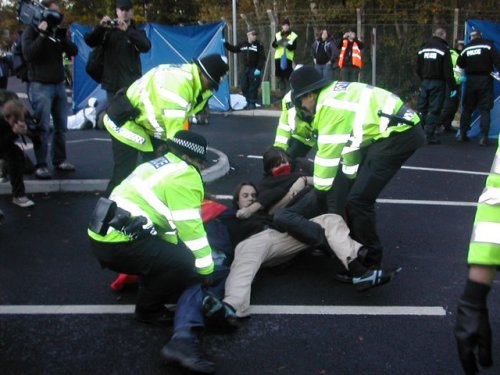 A major blockade and protest is underway of the Atomic Weapons Establishment (AWE) at Aldermaston near Reading to mark UN Disarmament Week [1]. The Aldermaston Big Blockade, organised by Trident Ploughshares [2] and supported by the Campaign for Nuclear Disarmament (CND) [3], Block the Builders [4] and the Aldermaston Women’s Peace Camp [5] is seeking to disrupt work on existing Trident nuclear warheads and the facilities that will enable the development of their successors at Britain’s nuclear weapons research laboratory.

As of 7:30pm, access to several gates has been blocked off by protesters lying in the road attached together with superglue, concrete blocks and arm tubes. Veteran campaigner Pat Arrowsmith, one of the organisers of the first London to Aldermaston march is sitting in the entrance to Tadley Gate. The A340 on Paices Hall, heading north to Aldermaston village has also been blockaded by protesters, near Home Office Gate.

Several hundred peace campaigners from as far afield as Norway, Germany, Switzerland, Austria, France, Scotland, Wales, Bradford and Plymouth have converged on Aldermaston for the biggest day of direct action against Trident in the UK since last October’s Big Blockade of Faslane naval base in Scotland, the home of Britain’s fleet of nuclear-armed submarines. [6] Today’s action builds upon CND’s Easter Monday demonstration at Aldermaston, the biggest to be held at the site for two decades. On that occasion, around 5,000 campaigners surrounded the site to mark the 50th anniversary of the first march to the base from London. [7]

Christian CND, having completed a 10-hour overnight prayer vigil at Tadley Gate, is now carrying out a procession of witness around the base in support of the blockade. [8] A monk and nun from Nipponzan Myohoji, a Japanese Buddhist order strongly opposed to nuclear weapons, are also in attendance, having walked from the London Peace Pagoda.

As well as calling for an end to Trident and the construction of new facilities that include a uranium enrichment plant planned for 2009, the campaigners want to highlight urgent concerns regarding public health and safety and environmental contamination, especially in light of recent revelations of severe flooding at AWE’s nearby Burghfield site last summer which resulted in suspension of all live nuclear work for nine months, and numerous other ongoing safety issues. [9]

Daniel Viesnik from Trident Ploughshares said, “The massive multi-billion pound expansion of AWE, continued deployment of Trident and its planned replacement are unnecessary expenses in the current financial climate and contradict and undermine the Government’s stated commitment to global abolition of nuclear weapons. All this is hypocritical, destabilising and in breach of the UK’s disarmament obligations. Trident is a serious hazard to life, health and the environment and there can never be a lawful or moral use for it. We as concerned citizens have therefore called a peaceful blockade during World Disarmament Week to demand that the new developments are ceased and the whole Trident system taken out of service without delay. We would rather see this facility made safe so it will be fit for use as an international centre of expertise on warhead decommissioning and verification as part of a global Nuclear Weapons Convention, in line with Government proposals.”

Musician and songwriter David Ferrard [10], who has travelled down from Scotland to perform for the blockade, said, “I have participated and sung at several blockades outside the gates of Faslane in Scotland, where the Trident submarines are based. I thought it was time to travel to the source of the weapons of mass destruction and show solidarity with my English neighbours.”

2. Trident Ploughshares is a campaign to disarm the UK Trident nuclear weapons system in a nonviolent, open, peaceful and fully accountable manner.

For further information and to arrange interviews, contact Daniel Viesnik: 07506 234 091

3. The Campaign for Nuclear Disarmament (CND) is one of Europe’s biggest single-issue peace campaigns, with over 35,000 members in the UK. CND campaigns for the abolition of all nuclear weapons everywhere. Contact Ben Soffa, CND Press Officer: 0207 7002350 or 07968 420859

6. Faslane 365, a year-long blockade of Faslane naval base, Scotland

9. Reports on severe flooding at AWE Burghfield in July 2007 and other safety issues:

Trident plant shut down in safety alert - The Guardian

11. In March 2007, Westminster voted in principle to retain nuclear weapons and to build new submarines from which to launch them. To date, there has been no vote in parliament on the future of warheads. However, Ministry of Defence (MoD) documents obtained by CND in July 2008 confirmed that contrary to repeated ministerial denials, the government has already made the decision to replace the warheads.

12. The MoD has already committed billions of pounds to a massive ongoing construction and recruitment programme at AWE, where Britain’s nuclear warheads are researched, developed and maintained. AWE first outlined its expansion proposals, which it claimed would be on the scale of Heathrow Terminal 5, in its 2002 Site Development Strategy Plan. Building work commenced - on the Orion laser facility - in 2005 and continues to this day.

Numbers are now coming through

I've just hear that 25 people have been arrested so far; that number will grow as events unfold. I also heard an estimate of around 300 people participating in the blockade. Well done to them all! 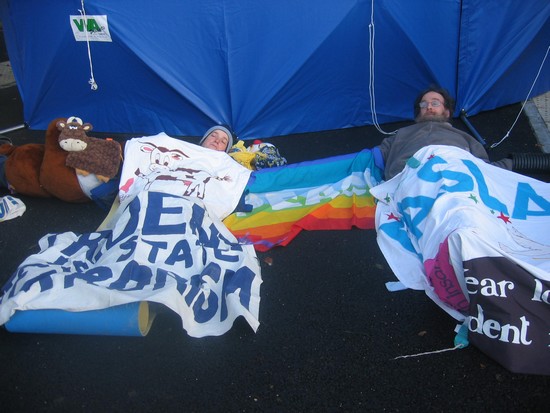 Protesters locked together with arm tubes

The arrest count now stands at 33, with those arrested taken to Newbury or Abdingdon. Nine people locked together with arm tubes managed to blockade the construction gate on the A340 for 5 hours; in the end they left over their own accord and were not arrested. A tripod was also erected on the A340; the police used scaffolding to remove this, after the road was blocked for 2 hours; 3 arrests were made. Currently the Rinky Dink (

http://www.rinky-dink.org/ ) is entertaining protesters at the Tadley Gate while a group of protesters (a Buddhist monk and nun, as well as people from Christian CND) have completed a procession around the entire boundary of the site.