2008 marks the tenth year that the bereaved relatives of those who have died at the hands of the state have taken to the streets. This year the Police kept a low profile and mostly a respectful distance from the families. The optimist could say that they have learned their lesson and decided to do things differently after their actions on the 2007 parade see:

Meanwhile the cynic might suggest that they knew damn well that there would be a lot more media interest this year. Due to the de Menezes enquirey, and the presence of Jean Charles' family on the demo. And were therefore told to be on their best behaviour? There was certainly three times more journalists present than last time. Take your pick.

Below are some pictures of the day: 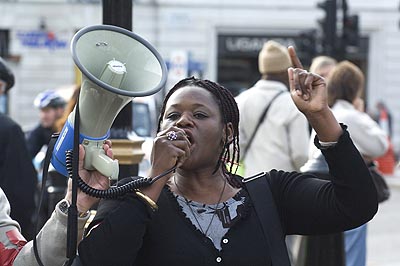 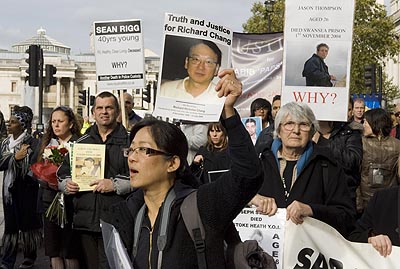 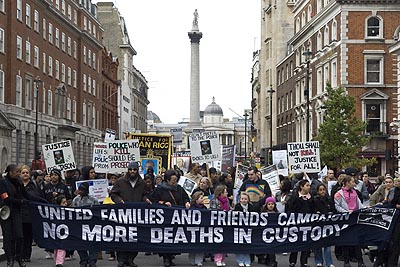 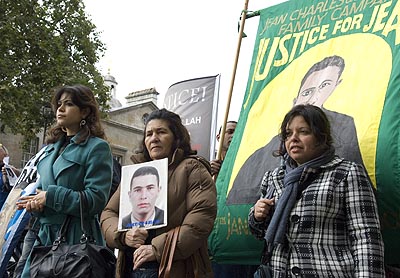 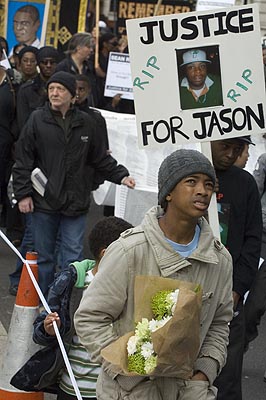 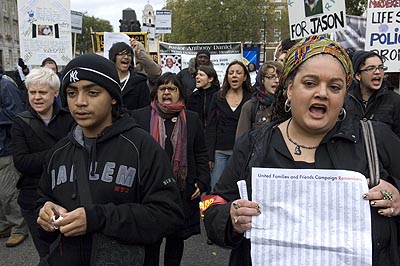 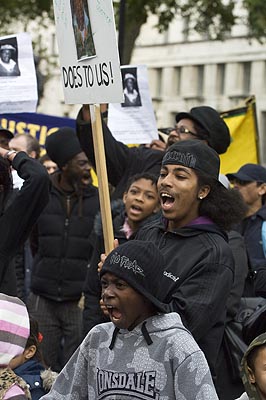 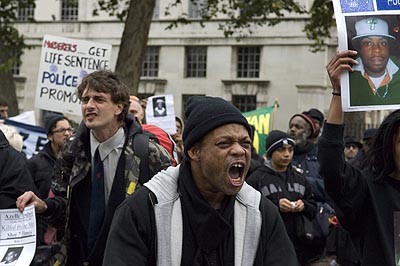 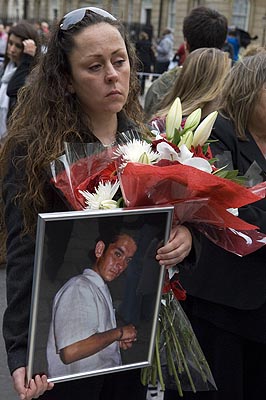 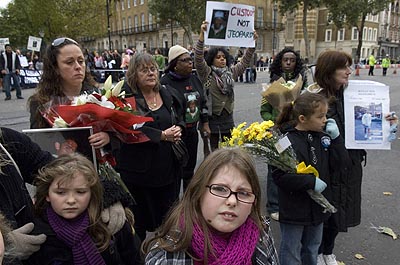 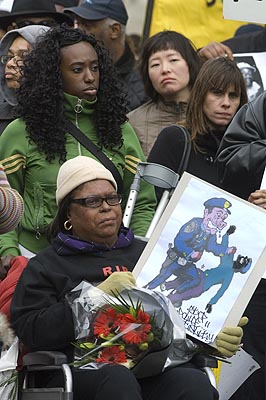 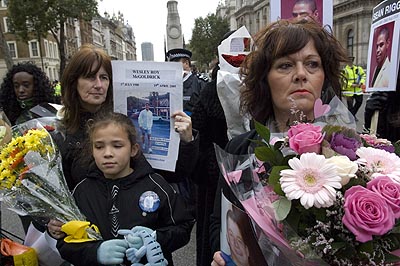 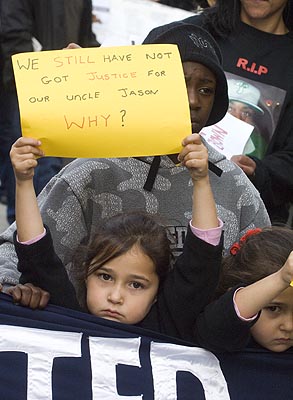 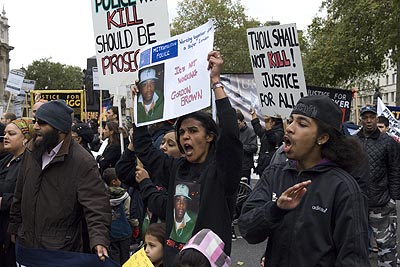 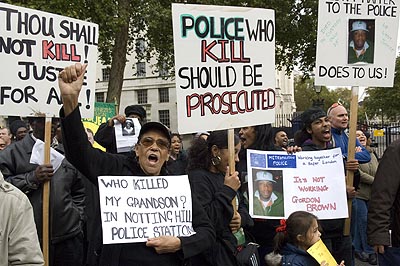 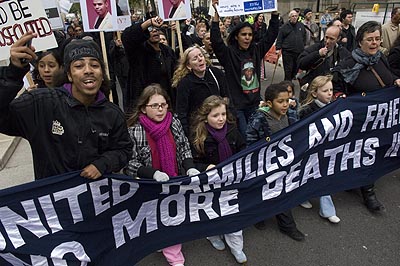 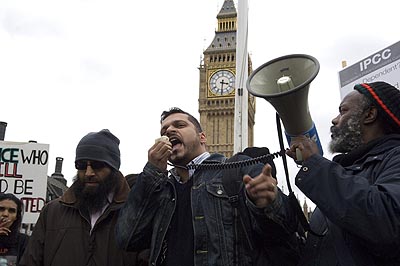 The march left slowly and silently from Nelsons Column and arrived at Downing street where some family members laid flowers at the gates and attached pictures of their loved ones to the security fence. Meanwhile the rest of the demonstration exploded in to anger at the government, police and prison system.

A noisy march to Parliament square followed where relatives spoke about their experiences. As always there were new faces on the demonstration. Friends and family of Sean Rigg who died in Brixton Police station in August were represented. Also the family of Habib Bullah who died while being 'restrained' by police officers in July.

Samantha Patterson gave a harrowing account of seeing the cctv footage of her brother Jason dying in the custody suite of Nottinghill police station. Nearly two years on the pathologists have yet to report their findings so no cause of death has been given. All the families are furious at the sheer length of time that these investigations take. None have any confidence in government bodies like IPCC.

Over the course of the day there were many fitting tributes and kinds words said for Pauline Campbell who passed away earlier this year. See:

Pauline who always spoke at this rally was sadly missed by all who had attended this event in previous years. She was always ready to tell it like it is, as well as comforting those overcome by the emotions of the day.

In addition to the exceptionally low Police profile, Whitehall was completely blocked for traffic (and not just one lane as before), and in front of Downing St the rally was allowed to remain on the lane (instead of being put into the cages on the opposite sidewalk) -- a first as far as I'm aware of. However, I share Guido's pessimism that next year probably everything will be back to same old. Also, despite the lower than usual profile, there were still plenty coppers upfront sporting batons (though not all of them), which I thought to be very inconsiderate, since many of the victims were (and still are) killed by lethal baton blows to their heads.

Once more the rally was very moving, a pity not more sympathisers managed attending. Not just the families' sorrow over the untimely deaths of their loved ones was very palpable, but also their anger at the murdering police and the complicit authorities (e.g. CPS and 'I'PCC were included in the slogans, too). At one occasion, I saw a group of policemen shadowing the rally walking over to the sidewalk because of some of the demonstrators shouting 'murderers' directly at them quite loudly.

Regarding the indymedia coverage, I would like to strongly second the various commenters who stated the march should be a feature ON THE MAINPAGE (and not just in the london section). This annual march is clearly a national rally, with families attending from all over, so treating it as a local protest definitely doesn't do it justice, but raises uncomfortable questions why this is happening specifically to this protest.

By the way, this protest ALWAYS ALWAYS TAKES PLACE THE LAST SATURDAY IN OCTOBER, so everyone who complained that is wasn't duly announced on indy (not 'indy's fault' but the one of every individual who didn't post it early enough, including myself), please take note and spread the word: The 11th annual protest will take place SATURDAY 31st OF OCTOBER 2009, assembly again again at 1 pm at Trafalgar Square.

http://4wardever.org, by doing so you will be posted on new developments and cases regarding death in custody, upcoming events etc. You can subscribe directly here:

Links to coverage of this year's 10th protest (additions welcome):

Love the pictures and article as ever PigBrother... keepin it real

Other articles that we have seen:

"The revolution is LIVE!!"