Christiania fires it up

After the police evicted a house in Christianiain the morning, Copenhagen saw yet another day of actions and night of rioting. For both police and activists this was a test of strengths and a taste of things to come as legal proceedings are getting more and more troublesome for the inhabitants of Christiania 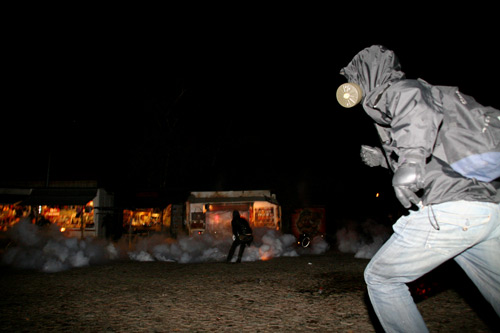 The Eviction
The main authority on Christiania (slots & ejendomsstyrelse) decided to evict the second floor of a house on Christiania. They were backed by an unprecedented large police force. At 7:30am a major police force arrived at Christiania. Neighbours of the soon to be evicted house were rushed out of their beds and homes without being allowed time to get their heart medicine. By 9am construction workers started tearing down the second floor. They wore ski mask's to avoid identification, making them look like terrorists and the police cleared the surrounding area from onlookers.

Background
The eviction itself isn't a big deal as such. There is a dispute about whether or not an inhabitant had built the second floor of his house legally or illegally. During recent years every inhabitant wanting to build or expand their house have had to apply for permission, which was always declined. The legal proceedings are moving at an extremely slow pace, effectively preventing the development of the area and leaving many inhabitants unsure about their future prospects. Another major step will be taken early next week when another important legal proceeding starts. Inhabitants of Christiania argue that Slots & Ejendomstyrelsen are provoking confrontations in order to put Christiania in a bad light before the trials.

Major Police Operation
The danish police has been receiving a lot of critique in the mainstream media as they spent their time evicting peaceful inhabitant of a part of the city and have no time to pick up shoplifters from security at malls. Another scandal revolving about the amount of time police take responding to emergency calls, due to lack of resources, resulting in several deaths. At the same time Denmark's police force has enough ressources to have 300 officers stationed in or around Christiania for more than 16 hours, and the time to prepare and operation of these dimension, all for the eviction and demolition of half a house. This has been critized by the liberal left parties (SF) in denmark.

Another Day of Action
Starting in the early morning hours, supporters of Christiania started gathering in the vicinity of the police barricade. Police used pepperspray in some instances, but generally threatened arrest to keep people at bay. At all times there were police on either sides of the crowd discouraging any attemts to attempt to get through the lines to the site of the actual eviciton. At some point a small barricade was built but dismantled soon after.

At 11am a spontaneous demonstrations starts from Christiania towards the city centre. Police presence is massive and the march is stopped when approaching the Slots & Ejendomsstyrelsen offices. Protesters try to run arrond the police blockade while the police tries to encircle the protesters and push them back towards Christiania. At one point a police car tries to drive throught the crowd bumping into two persons blocking its way, luckily not resulting in any serious injuries. Protesters charge it and pull of its side mirrors causing it to back off.

On the way back the demonstration stops, blockading one of the bridges, a major thoroughfare into the city for about an hour. The police are obviously pissed and want to clear the bridge but were held of by the cameras of the press who were massing there. After the blockade is lifted people return to Christiania.

Police steps up their effort
At 4pm another demo tries to leave Christiania. This time the police blocks it at the entrance to of Christiania saying to the press that they wouldn't "reapeat the mistake from earlier today by letting an unruly crowd into town". Police ask for a "leader of the protest" to step forward in order to "ensure safety". No leaders are to be found.

The demo disperses but at 5pm a crowd rushes to blockade another major bridge into town. More than 100 cops show up in a hurry while still maintaining a strong presence at Christiania and all other bridges into town. The police quickly surrounds the crowd, attempting to pen everyone in, but enough escape to take the neighbouring bridge.

The police allow the penned in people join their comrades and then move to disperse the crowd. Altogether the bridge was blockaded for about 25 minutes.

So far the day has not seen a lot of violence. The massive police force has succeeded in arresting all in all 3 people for minor offences. It seems like police are following a no arrest policy in order not to spark yet another riot.


Overreaction or Provocation
Returning to Christiania the police takes up a large pressence at the entrance to Christiania in the beginning dark of nightfall. A few bottles fly in their direction and the police responds by shooting tear gas all over the place. For about an hour, little is thrown at the police, however large amounts of tear gas are launched at Christiania. Whenever they detect movement, police fire more gas grenades. The windless evening deprives large parts of Christiania of breathable air, effectlively shutting them down.

Rioting Picks Up
At about 7pm more organized counterattacks are launched while the wind picks up a little bit and blows the gas away. The police responds with more tear gas. Rioters get creative in their ways of attacking the police, hiding in gardens and ambushing from several directions at once. The police withdraws from the entrances to Christiania allowing the rioters to build fires in the streets. The police forces charge, but are pushed back after a brief battle with three molotows being trown. The rioters are very organized keeping guards on all sides to avoid the police making any arrests and have set up an early warning system.

The police once again drowns the area in massive amounts of tear gas. According to mainstream media they were very close to running out and had to have it delivered from other parts of the country, sirens blazing.

The battles continues for some hours with more protesters attacking the police and the police firing tear gas back every time. The police are unable to advance without exposing themselves so they keep staying right outside Christiania taking the repeated rains of bricks and stones and shooting tear gas. After a few hour the police use all their numbers attacking several places at once. The rioters fall back and disperse inside Christiania, with 12 people getting arrested. Some are likely to have been bystanders, getting caught in the charge. All of them are charged with heavy rioting, which usually results in a sentence of a few months prison time.

In spite of being one of the largest police operations in Christiania yet, it failed to prevent a serious riot, failed to stop people taking to the streets and taking action, failed to arrest more than relatively few people. Once again muscles were flexed on both sides of the conflict. A taste of things to come if the governments normalization plans are carried out and more houses are evicted.

A danish timeline can be viewed here: