The Actions of solidarity with USA FNB in Russia 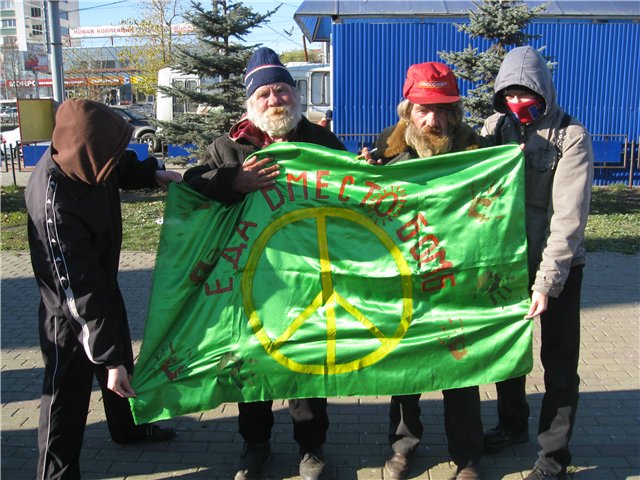 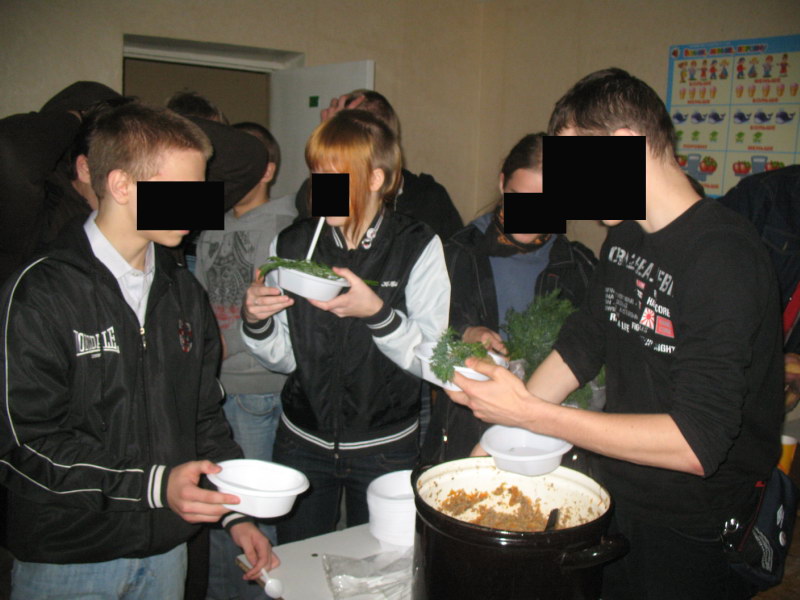 26.10.2008 The Day of united actions wich support American FNB. Some actions , wich took place in Russia . Moscow, Vladivistok, Voroneg, Piter, Chelyabink, Bryansk, Murmansk, Apatity, Ivanovo. Antifa- fest in Voronej.
Leaflet which we had distributed in the most Russian cities, which took part in a synchronous action.
“We aren’t extremists! We feed people!
26 of October – the world day of groups’ actions “Food not bombs” against repressions activists this initiative in America.
In summer, FBR made searches in the houses where food for homeless is cooking. Some activists were arrested. Gatherings for cooking food were failed, and innocents were judged for years in prison.
We mustn’t sit and watch how the government destroy people who are building civil society!
Food not bombs – against militarization.
Extremists are in power.
We say No to the pressing on groups “Food not bombs” in USA ! Freedom to our comrades!”

The embassy of USA in Moscow doesn’t work on holiday so many fnb-groups expressed their opinion against whole action in front of the embassy, because in this case we had to make it not on 26.10. Variants of actions near others American objects were discussed. Except it , it had to be quick action because cops could meet us. But one Moscow group decided on a special screw.

24.10.2008 Moscow.
Today the Food not bombs action took place near American embassy. 9 people took part in it. It was cruelly stopped by cops, 2 guys were beaten and taken with cops. They are in OVD “ Presnesenskyi”. Information will be as we’ll get it.
Upd: They are judged for the international hostility with USA and opposition to cops during the arrest.
Upd2: Guys are set free.


Again about this action : 26th of October was named A Global day of solidarity with the aim of stopping repressions against FNB groups in USA.
FBR and the other agencies have been trying to stop our work since 1988г. New wave of repressions started after the Patriotic Act, wich became a low after establishing of it by the president of USA Jorge Bush on 26/10/2001.
Anarchists from the group ‘Gods’food’ made an action on 24/10 near USA embassy. On 24 just because the embassy is closed on 26. There were 9 people. We came bright dressed air balls. We gave people cookies with tea and leaflets about whole action. We told passers-by about fnb actions and what repressions they are pressed by the government of the USA. When all food were given we came in front of the embassy of USA , we gave people the leaflets and hanging them on the fence and putting it on the cars of the embassies.
Cops saw us and began to shout at as to go away. But we didn’t stop and go on. They tried to call other cops by rations, and near other post another cop stopped 5 of us. The other 4 went further and didn’t stop because of his shouts. He told us that all guard with truncheons would beat us. Our applications to show us documents weren’t heard as usual, and they were as stupid and rude as usual. We walked away. But those 4 fellows stopped at the another corner and were just standing. Cops tryid to arrest a girl but she opposed. Then he beat a guy in the face by leg and about several times in a stomach, then caught him by hair and took him to the post. Then another cop attacked on the other anarchist. He bet him with several kicks in his face, stomach and neck. So as an result cops took 2 guys to the post. All of us came to the post and found out where our comrades were sent. After 21.00 they were free.
On the 26.10 made FNB action near station building and gave food to homeless people and gave leaflets.


26.10 Voronej
After antifasist festival has passed the next action “fnb”. On the festival we fed people grain with fried soya and gave juice. They has exposed box for help to FNB, has collected the good sum) Has decided to prepare a borsch. Were late on some time, but all has waited us. The most participants of festival has gathered for the action, were guys from Lipetsk and Bryansk. Cops has very much excited quantity of participants and they some times by passed round an action place, but they didn’t came to us. Homeless were pleasant for the borsch very much. Many of them ate 2 portions. All food were eaten, leaflets of solidarity with fnb-USA had been distributed, the guys had left and then they had dispersed on cities, bat we left there till next sunday)

fnbvrn@mail.ru
25.10 afa-fest in Voronej:
there was a fnb action in the edge of afa- fest. 40 people were given food. Fotos you can watch here:


26.10.2008 In Chelyabinsk Food not bombs action took place in the edges of the day solidarity with Americans activists. We made new banner by this action.We cooked grains with carrot and onion . There were tea and bread. 15 people got food and there was 1 child with them. Cops has very much excited quantity of participants and they some times by passed round an action place, but they didn’t came to us . Because of new banner more passers-by stopped and interested in action . 40 Leaflets were given. Also we gave people clothes.
There were about 15 activists, half of them- new people. The action continued about 40 minutes.
Fotos:

26.10.08 Solidarity action in Bryansk with the leaflets about it. Homeless- about 15 were given soup and tea “Karkade”. There were 7 activists, new people took part who wanted to do something... Write to us:

26.10 Vladivistock:
Today everything went off the best way: the banners were hung up, leaflets were distributed, boiled rise, soya meat, stewed vegetables, bread, tea with buns and chocolate sweets gladdened and warmed about 20 people (and 3 kids), some clothes were dispensed, medicine was bought for first aid. By the way, it was the firs time, we were asked for aid with medicine. Where can we get free medicine? "Free" from drugstore? As usually, there was not enough food, and the late gypsy children got remainers of kasha and tea, but everyone came up for a recurring portion not once and everyone took few help for invalids and others who could not walk themselves. As usually the needers amazed that we were young and not from organizations and churches, but by ourselves take care of them and did not disdain to eat with them, told their stories and offered help. Unfortunately, except tourists that constantly took photos of us and our banners, nobody of passers-by shown interest. By the way, it turned out, that the action quite could be held by 2 persons, and we spent only about 300 rubls, we had got for delivering blood in hospital.

26.10.2008 Perm’ Because after the previous fnb action three our comrades were stopped by two “right” and were asked to “say to your friends antifa”, that we will be attacked, we were o the alert. During the distribution of food a train from Moscow has arrived, full with hooligans of FC “Locomotive”. They had looked at us and into the tanks, but none of them had attempted to say or to do smth., though there wasn’t any love in their eyes. In a mob of 10-12 people we fed more than 30 people with soup with onion, rice, buckwheat, tea and bread. We were glad to see, that food was taken not only by homeless, but also by pensioners. Group contacts:

26.10.08 Moscow, “Feast for Gods" group. All hungry and homeless people were fed. Also leaflets in solidarity with American fnb were distributed.
Photo:

The Day of United Activities in Saratov: 20 people were fed with buckwheat with onion, carrot, bread and tea. Leaflets were distributed for all travelers and for eating people. Had risen up the banner, this time cops were looking without any interest. It’s nice that 5 people had taken with them various cans for the food, about 7 kg of food were given to them.

St.Petersburg. Today, in the center of the city, opposite to Kazan Cathedral, took place a “Food not bombs” action, organized in support of American political prisoned anarchists who were jailed for distributing food to poor people. Activists were giving food to all people, and some of them, dressed as prisoners activists were singing “jail songs” with revolutionary texts. In total in action participated more than 30 people. The event ended with a march on Nevsky Avenue, with leaflets and food distribution to travelers. Video is in this news:

26.10.08 Ivanovo. On this nice day were cooked high-class pasta with soy and verdure, mmmmmm. Everybody liked it. Cooked as always 3 people, others have been already on the place. The only thing is that we have less and less clients, and the table was broken too. But all hungry were fed and we ate a lot too. Contacts:

You can find out more about initiative "Food not bombs" here:

P.S
In the view of that in foreign countries and cities in Russia are continued actions of memory Ol’gy Rukosyly, mind it is needed to notice that nobody has given us any conclusive evidence about existence and death of this girl. We ask not to realize actions of memory and excuse us for so long quiet on this term.
Independent activists of Moscow, Samara, Bryansk, Chelyabinsk, Kirov, Voronej, Kiev, Perm