Here is a letter from Simon Goodricke of the BNP, which was sent to the Anarchist Federation. Goodricke has a bit of a funny relationship with the police, you see... he used to be a detective, but then got put away for perverting the course of justice, and defrauding a pensioner of £1000. He was also arrested earlier this year, 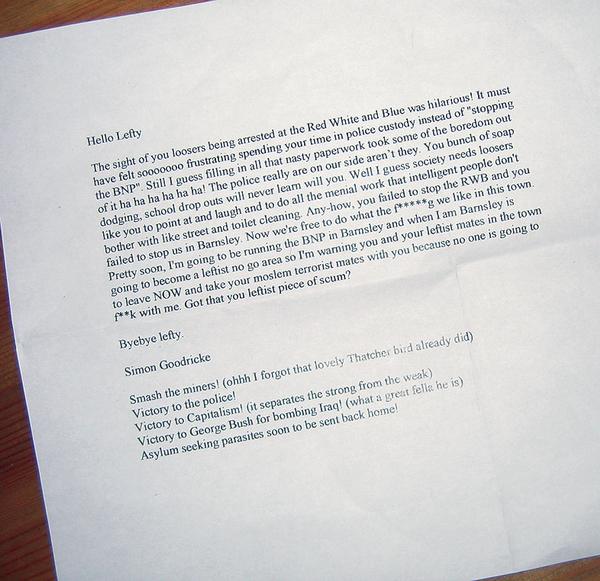 The sight of you loosers being arrested at the Red White and Blue was hilarious! It must have felt sooooooo frustrating spending your time in police custody instead of “stopping the BNP”. Still I guess filling in all that nasty paperwork took some of the boredom out of it ha ha ha ha ha ha! The police really are on our side aren’t they. You bunch of soap dodging, school drop outs will never learn will you. Well I guess society needs loosers like you to point at and laugh and to do all the menial work that intelligent people don’t bother with like street and toilet cleaning. Any-how, you failed to stop the RWB and you failed to stop us in Barnsley. Now we’re free to do what the f*****g we like in this town. Pretty soon, I’m going to be running the BNP in Barnsley and when I am Barnsley is going to become a leftist no go area so I’m warning you and your leftist mates in the town to leave NOW and take your moslem terrorist mates with you because no one is going to f**k with me.
Got that you leftist piece of scum?

Smash the miners! (ohhh I forgot that lovely Thatcher bird already did)
Victory to the police!
Victory to Capitalism! (it separates the strong from the weak)
Victory to George Bush for bombing Iraq! (what a great fella he is)
Asylum seeking parasites soon to be sent back home! "