http://en.wikipedia.org/wiki/Laurent_Nkunda) have accused the United Nations Mission (MONUC) of backing the national army. According to the rebels, MONUC is no longer neutral, contending that it should not support one side and leave the other. 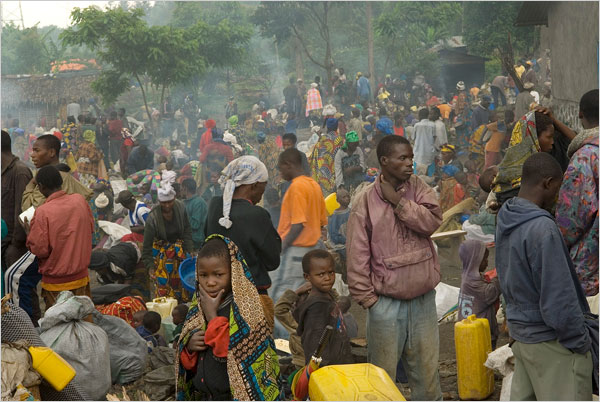 NKUNDA , the leader of the rebels..

http://en.wikipedia.org/wiki/Laurent_Nkunda) have accused the United Nations Mission (MONUC) of backing the national army. According to the rebels, MONUC is no longer neutral, contending that it should not support one side and leave the other.
Peacekeepers are reported to have attacked the National Congress for the Defense of People (CNDP) rebel group with helicopter gunships to protect civilians after the rebels surged near the provincial capital, Goma. This happened after angry protesters pelted four UN compounds with stones, claiming MONUC failed to protect them from the advancing rebels.Jack Kahora a journalist in the Democratic Republic of Congo said from North Kivu’s restive provincial capital Goma that the current situation is tense after peacekeepers fired warning shots into the crowd of angry protesters, according the VOA. He said MONUC is supporting the governmental forces in the situation of casualties in the military, guys who are wounded. He said the rebels claim they have no choice but to attack MONUC and the national army together.Kahora said residents are expressing their frustration of the failure of the UN mission to protect them against the clashes between the rebels and the Congolese national army.Nkunda's forces, which comprise mostly ethnic Tutsis, refused to integrate with the government forces and have been controlling much of the Kivu area. The dissident general is said to have the backing of Rwanda's Tutsi-dominated government. Kahora said the residents are also complaining that suspected foreigners have attacked village

http://english.aljazeera.net/news/africa/2008/10/2008102915392214922.html
United Nations peacekeepers said they have used attack helicopters for a second day to try to halt the advance from Nkunda's fighters Clashes were reported in Kibumba, about 30km north of Goma, where the UN aircraft fired on NCDP positions, temporarily stalling their advance and forcing them to retreat to higher ground.
A senior aide to Nkunda, a Tutsi who says he is fighting to protect ethnic Tutsis, told AFP that the CNDP would take Goma. After three days of fighting, the city's population has swelled with panicked villagers fleeing rural areas to escape the fighting. Government forces are blocking roads into Goma from the north, but had pulled out in disarray from a second position further north. The Kinshasa government accuses neighbouring Rwanda of supporting Nkunda, a charge Kigali has denied. Nkunda's troops were "backed by Rwandan tanks which are pounding our positions from border hill positions," a government official said. Rwanda's Tutsi-led government has repeatedly denied DR Congo's accusations that it has sent troops across the border.