Northcom, Africom and Other Threats 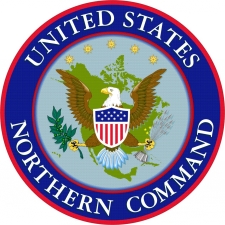 
Northcom, Africom and Other Threats


"Many Americans are subject to becoming future victims of this new military mission."

Why remember May 4, 1970 in October 2008? It is the day that a clear message was sent with military might that Americans are not immune from attacks felt around the world. On May 4, 1970, also known as the May 4th Massacre, four students were killed and many more injured at Kent State University by the National Guard. These students non-violently protested the US attack on Cambodia and were made example of to show that militarism trumps civil rights. Now, in 2008, an era marked by increased military sophistication and unprecedented presence all over the globe, the US military boasts over 700 bases worldwide, and on October 1, 2008 established the Africa Command, or Africom - for the last standing continent that did not have a US military command. The real purpose and function of Africom [1] remain unclear but what is no mystery is that whatever Africom is up to, the mission has begun and the governmental and civilian voices of dissent in Africa and the US have been unable to stop it.

October 1, 2008 not only marks history for US-Africa relations but also on that same day, the US also made history by deploying troop trained for combat in Iraq to the Ft. Jackson base in Georgia on a mission as unarticulated as Africom. According to the Army Times, the 3rd Infantry's 1st Brigade Combat Team (BCT) will serve under Northern Command, or Northcom, as an "on-call federal response force for natural or manmade emergencies and disasters, including terrorist attacks." Prior to the establishment of Africom, Northcom was the newest brand of US military expansionism. Established on October 1, 2002 under the leadership of Defense Secretary Donald Rumsfeld, Northcom was created to support civilian authorities like the police and fire departments in natural and human disasters. It debuted in that capacity in 2005 after Hurricane Katrina where US troops along with Blackwater military contractor mercenaries patrolled the streets of New Orleans. Yet, 2008 marked history for Northcom as this is the first time that it has a unit solely under its command. In the words of Northcom's commander General Gene Renuart on northcom.mil, "On the first of October, we'll have an organized force, a trained force, an equipped force, a force that has an adequate command and control and is on quick response - 48 hours - to head off to a large-scale nuclear, chemical, biological event that might require Department of Defense support."

"Will dissenters be branded terrorists?"

The idea of this quick response brigade trained for war should set off alarms in anyone that recalls incidences such as the May 4th Massacre. With vague definitions of who and what constitutes a terrorist and terrorist activities or even emergencies and disasters, many Americans are subject to becoming future victims of this new military mission. With economic instability caused by the housing crisis and the plummeting stock market, civil unrest is sure to rise. Will dissenters be branded terrorists? Additionally, what about the already active and increasing boldness of civil dissenters who demonstrate against the war in Iraq and Afghanistan, environmental injustices and human rights violations experienced by immigrants? What is their fate under this Northcom mission?

On the website of Northcom [2], they attempt to ease accusations of its potential to violate the Posse Comitatus Act - which prohibits military forces from becoming directly involved in law enforcement. However, Posse Comitatus does not prohibit military training or the distribution of weaponry to police departments. So in a bad situation, police departments that serve as first response can do so with sophisticated weaponry and war training and whatever they cannot accomplish will be followed by this second (and quick) response.

So, it appears that May 4, 1970 was not an exception in the state response to civil disobedience but it was a prelude to a rule that has firmed up its mission as of October 1, 2008. For all those who were in Washington, DC to protest Africom on October 27th; for all those that are still healing from the police attacks at the Democratic and Republican national conventions; for all who bear witness to these vulgar violations of democracy and the establishment of the military state, you are advised to ponder the words of Marcus Garvey and "keep cool." Although Garvey's wise counsel was of a different era, it still serves as food for the scared and brave:

Let no trouble worry you;

just be brave and ever true;

If they'd put you in a flame,

Though you should not bear the blame,

Do not start to raising cane,

* Chioma Oruh is a graduate student at Howard University in the African Studies department, and can be contacted at

chioma@journeywomanchi.comThis e-mail address is being protected from spam bots, you need JavaScript enabled to view it . Oruh is author of "Militarizing Africa: A Guidebook," which can be downloaded by clicking the URL link below: