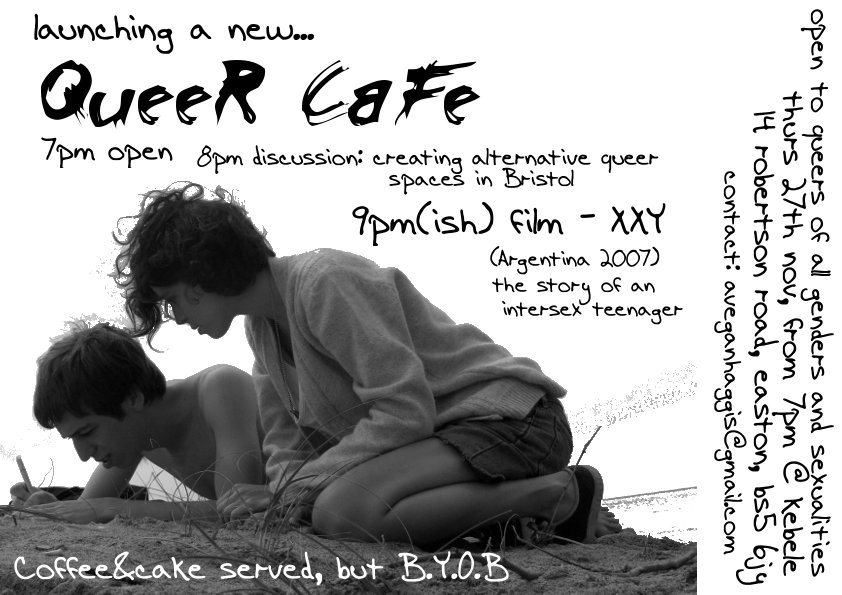 We are a small group of queers in Bristol and we want to start creating DIY alternatives to Bristol's mainstream gay scene. We feel that Bristol is drastically lacking in explicitly queer spaces.

We want spaces that don't repress and constrain our sexualities, where we can hang out, create, organise, skillshare, flirt, watch films or perform without someone making a profit...

We'd like a space where we can actually communicate with each other, a space away from the Bristol gay meat market.

Kebele is a radical social centre in Easton which aims to be inclusive of everyone regardless of age, race, gender, class, sexuality and dis/ability. We're involved in Kebele, it's part of our community, it has hosted queer events in the past, and we think it needs queering up ;)... So for us it's an obvious place to start, but it doesn't have to end there...

Come along & hang out, watch a film, have a chat over some cake and make his space happen.

Open to queers of all genders and sexualities

"XXY" is about Alex, a 15-year-old who lives with overprotective parents, Kraken and Suli, in a pretty beach-side village in Uruguay. The family, many years ago, left Rio de Janeiro and retreated to this sparsely populated place to stop people from asking rude questions about Alex. Like: Is Alex a girl or a boy? These inquiries traumatize Alex, an intersex teenager, who's confused, too, about sexuality, but also about the family's secrecy. "If I'm so special, why can't I talk about it?" Alex asks Kraken and Suli.

A couple and their teenage son come to visit, at Suli's invitation. Ramiro, their visitor, is a plastic surgeon who does nose jobs and breast implants for money so he can afford to do what he truly loves: helping people like Alex decide who they want to be. The presence of the son, Alvaro, upsets Alex's equilibrium, so Alex's confusion deepens and begins to envelop other people.