Secular-minded workers, students, professionals, and concerned citizens joined a mass protest in the streets of Karachi, demanding an immediate end to the deadly raids by U.S. forces on Pakistani villages from bases in Afghanistan. The current U.S. policy of shifting combat focus from Iraq to the Afghanistan-Pakistan border, apparently backed by both Republicans and Democrats, is galvanizing Pakistani public opinion decisively against the U.S. (Photos by Abira Ashfaq and Faris) 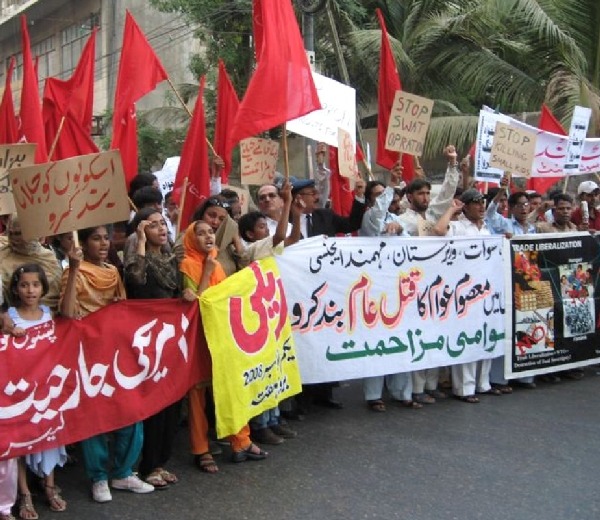 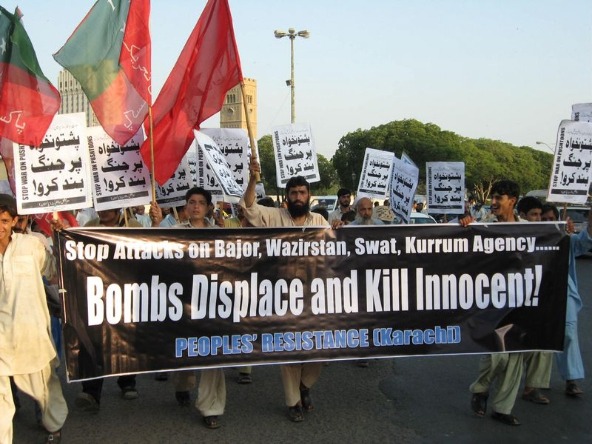 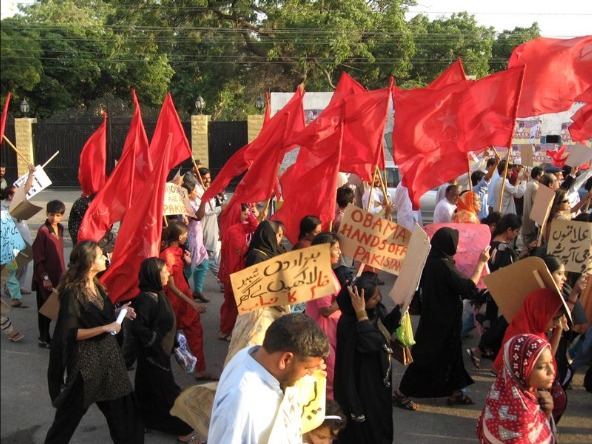 Red flags in streets of Karachi 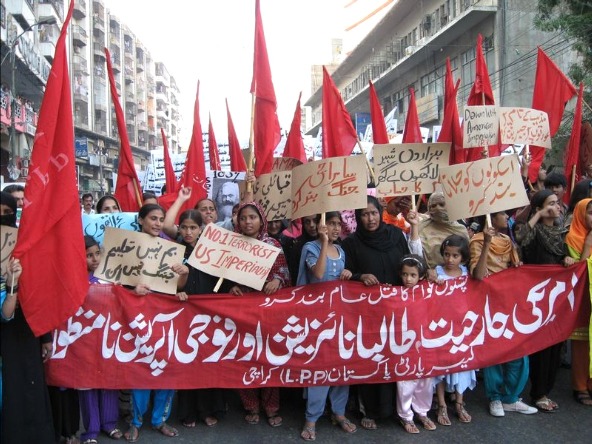 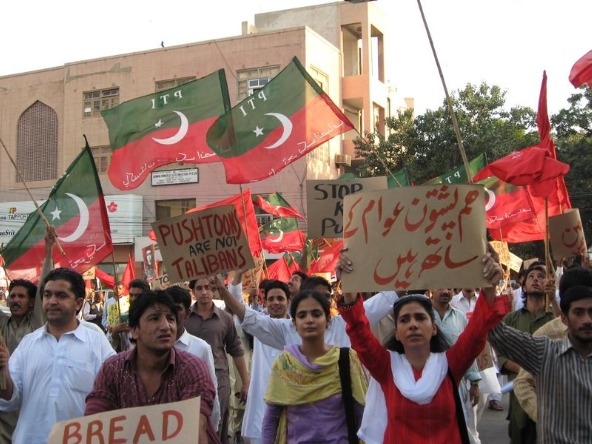 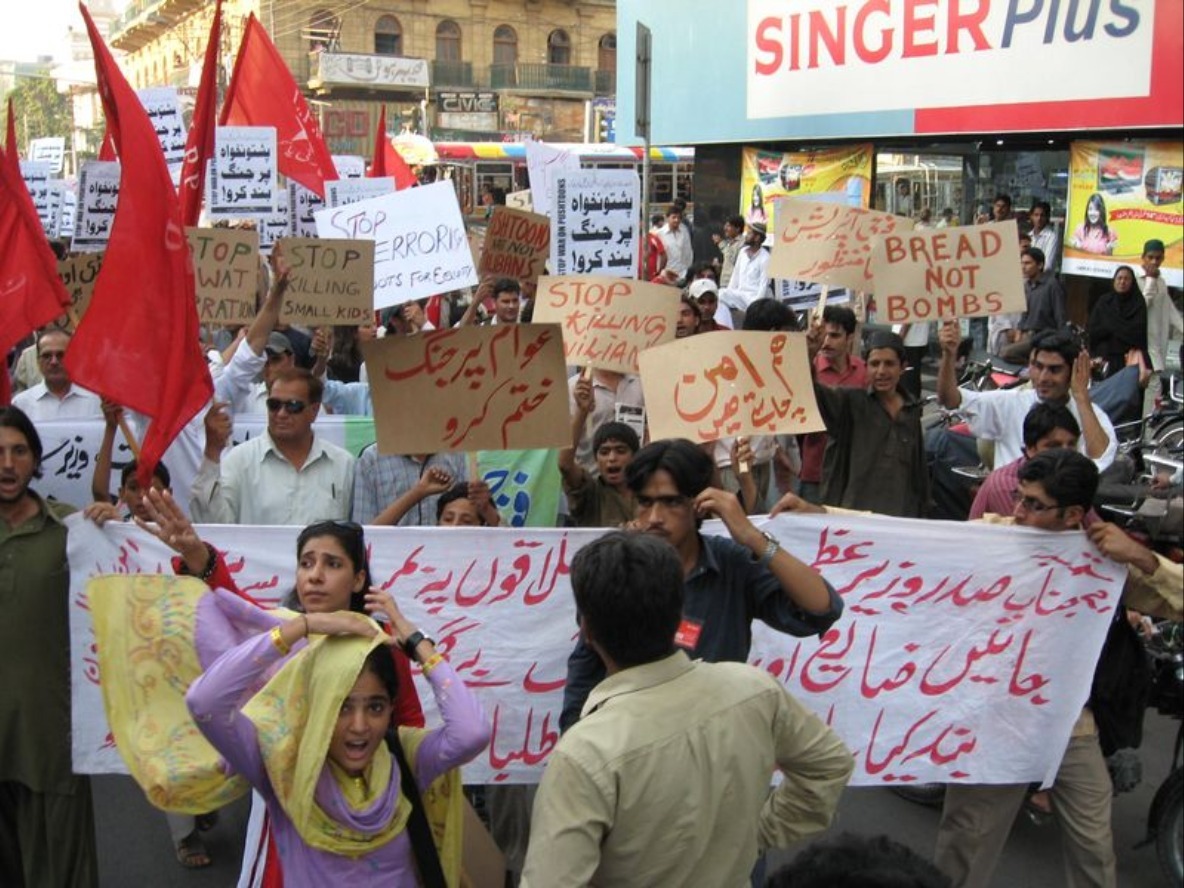 In a country which has historically been more accustomed to right-wing, nationalist, and militarist politics – even in the universities – this demonstration was emblematic of new undercurrents in Pakistan. Instead of nationalist slogans, there were slogans defending life and human rights. There was a sea of red flags of labour and red-green flags of the Pakistan Tehrik-e-Insaf (Pakistan Movement for Justice).

After seven years of a failed U.S.-led “war on terror” in Afghanistan, the governments of both Afghanistan and Pakistan have moved towards the view that there is no viable alternative to talks among all parties to the conflict, including the Taliban. A joint Afghanistan-Pakistan tribal council held on 28 October 2008 agreed on the “urgent and imperative need for dialogue and negotiations with the opposition groups in both countries, with a view to finding a peaceful settlement of the ongoing conflict.”

The U.S. government in its “global war on terror” claims a military justification to pursue al-Qaida and Taliban fighters operating in Afghanistan who take sanctuary across the border inside Pakistan. However, the majority of Pakistanis, while overwhelmingly opposed to the al-Qaida and Taliban insurgency, are becoming increasingly concerned about the massacre of innocent civilians in Bajaur, Swat, Waziristan, Kurram Agency, Khar, and Mahmond Agency by U.S. cross-border attacks.

Before August 2008, U.S. military attacks from bases in Afghanistan into Pakistan had been limited to a half dozen or so sporadic intrusions into Pakistani airspace. However, since the beginning of August, the number of U.S. attacks, many employing missile-carrying Predator drone aircraft, has escalated to dozens of separate incidents on at least 18 different villages and towns. This culminated with the U.S. missile strikes near Mir Ali town in North Waziristan and near Wana town in South Waziristan on 31 October 2008. The two attacks reportedly killed 32 people, including an al-Qaida militiaman, other Arab fighters, and Pakistani civilians.

The U.S. bombing came just hours after Pakistani Prime Minister Yousuf Raza Gilani demanded that NATO forces in Afghanistan stop violating Pakistani airspace, calling the tactics “counter-productive” to the country’s efforts in the war against terrorism. Gilani made the comments at the World Economic Forum in Istanbul.

These events followed in the wake of another U.S. missile attack on the Pakistani village of Mandata Raghzai in South Waziristan on 27 October 2008, which killed as many as 20 people. Pakistan’s Parliament rushed to pass a resolution on the same day condemning the U.S. attack by Predator drones, saying that they undermine government efforts to defuse tribal militancy through dialogue. The resolution called on the Pakistani government to take “more effective measures” to stop such attacks.

Apart from Predator drones, U.S. forces in Afghanistan have launched at least one helicopter-borne commando raid into Pakistani territory in September.

The cross-border U.S. military operations have reportedly killed several thousand innocent civilians, including women and children. Hundreds of thousands of people in Pakistan’s tribal areas are believed to have been internally displaced by U.S. and Pakistani military operations.

This latest U.S. violations of Pakistan’s sovereignty have so enraged Pakistanis, that many who had never protested against the U.S. before came out into the streets of Karachi. Although the Karachi protest had been announced well before the latest U.S. attack, the U.S. action served to swell the ranks of popular expressions of outrage.

The coalition of some twenty political, trade union, professional, and civil society organizations issued these demands:

· “We condemn the United States and Pakistan for their recent military aggression in the region.”

· “We urge the government to provide instantaneous relief to those affected by this war, and take urgent action to end the misery of refugees living in deplorable conditions all over Pakistan.”

· “We demand that the affected people be provided reparations for the loss of life and livelihoods.”

· “We urge the international community to take notice of the refugee situation and take action.”

· “We also urge them to exert pressure on the United States to halt its attacks in Pakistan and Afghanistan stop Pakistan from aiding the US war effort.”

Protest organizers called on the Pakistani government to “seek political solutions backed by public dialogue and consensus. We want Pakistan to enforce a foreign policy that is independent of the agendas of foreign governments, like the United States, when it comes at the cost of Pakistani sovereignty, its economic prosperity, and its fundamental duty to protect its citizens.”

Awami Mazahmat leaders expressed hope for “a society free from the chains of violence, weapons, and drugs, and we need media to help us build toward that.”

The Federally Administered Tribal Areas comprise a rugged border region with a population of approximately 3.5 million. The Pushtoon inhabitants of the area move freely across the border with Afghanistan as they have for centuries. The region includes both North and South Waziristan where the U.S. alleges that Osama Bin Laden has taken refuge.