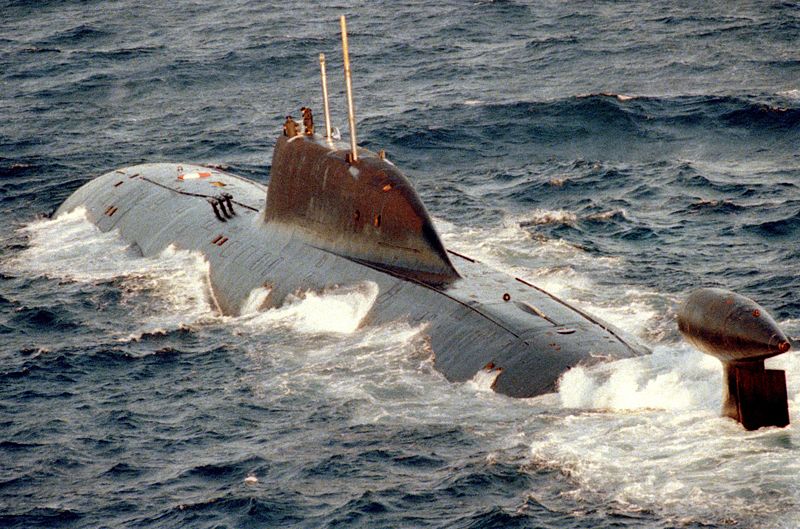 MOSCOW, November 9 (RIA Novosti) - At least 20 people were killed and another 21 injured in an accident on a Russian Pacific Fleet nuclear submarine which was undergoing routine tests, an aide to the Russian Navy commander said on Sunday. "More than 20 people were killed during sea trials as a result of the accidental launch of the fire-extinguishing system on a nuclear submarine of the Pacific Fleet on November 8," Capt. 1st Rank Igor Dygalo said. "Shipyard workers and service personnel are among the victims." Dygalo said 208 people, including 81 service personnel had been onboard the submarine at the time of the incident. He said the Navy commander-in-chief had ordered a halt to the trials and said the submarine is being escorted to a temporary base by the large anti-submarine ship Admiral Tributs and the rescue vessel Sayany. He stressed that the sub's reactor had not been affected. All the injured have been evacuated on to the Admiral Tributs and will be taken to hospitals in Vladivostok.
First Deputy Defense Minister Alexander Kolmakov and Navy commander-in-chief, Adm. Vladimir Vysotsky are heading to the accident scene, Dygalo added. He did not give details of the type and name of the submarine. A source at the Amur shipyard, however, said the submarine was called the Nerpa and had recently started sea trials in the Sea of Japan. "The submarine is being moved to a temporary base in the Primorye Region, where a team from Moscow is heading and a Pacific Fleet commission and the military prosecutor are already located," the source said.
A high-ranking source in the Pacific Fleet said the accident had occurred in the nose section of the submarine and confirmed that it had not damaged the submarine's reactor. The most serious accident on a Russian submarine occurred on August 12, 2000, when the nuclear submarine Kursk sank following an onboard torpedo explosion, killing all 118 crewmembers. The construction of the Akula II class Nerpa nuclear attack submarine started in 1991 but has been suspended for over a decade due to lack of funding. Akula II class vessels are considered the quietest and deadliest of Russian nuclear-powered attack submarines. The Nerpa had started sea trials on October 27.
--------------------------------------------------
Nerpa -

http://en.wikipedia.org/wiki/Akula_class_submarine
On October 27, 2008, it was reported that the Akula-II submarine Nerpa had begun her sea trials in the Russian Pacific fleet before handover under a lease agreement to the Indian Navy On November 9, 2008, while conducting one of these trials, an accidental activation of the fire-extinguishing system took place in the fore section of the vessel and in the process some 20 people, including both crew members and shipyard workers, lost their lives. Dozens of others suffered injuries and were evacuated to an unknown port in Primorye.This was the worst accident in the Russian navy since the loss of the submarine Kursk in 2000. The submarine itself did not sustain any serious damage.