Following their appeal hearings against dismissal on Friday, the Latin American cleaners employed by Amey PLC at the National Physical Laboratory will join with other migrant workers in struggle at a public meeting on Sunday - see details below. Meanwhile this interview was published a few weeks ago in the Spanish language monthly 'Noticias'. 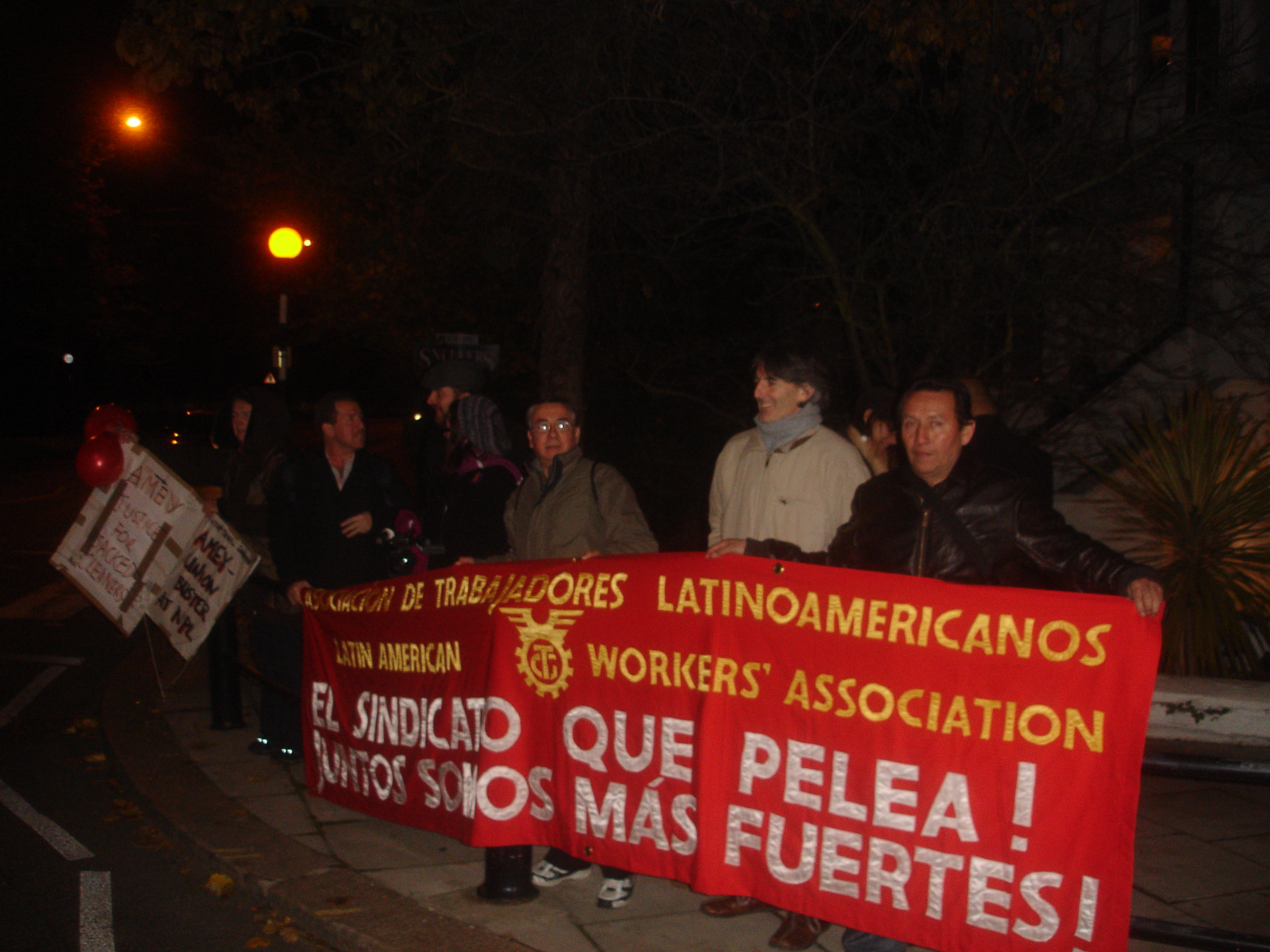 On 1 December 2006 the National Physical Laboratory (NPL), based in Teddington, Middlesex, contracted the company Amey through the then Department of Trade and Industry.

At that time the cleaning department employed 36 Latin Americans at £7.43 an hour. According to Julio Mayor, the NPL cleaners' representative at the time,

“Amey considered that salary high and began to reduce the cleaning personnel, overburdening them with work, constantly changing their place of work and questioning absences justified by health and other valid reasons.”

“In May 2007, says Mayor, “they summoned all the workers to a closed area under the pretext of a training session. 15 minutes after we had assembled, about 60 police and immigration officials arrived and took away six people undocumented in the UK. Part of the policy of Amey was to get rid of the workers who were working there before they won the contract and they used every tool they had. All the workers were Latin American.'

Do you consider this a persecution on grounds of nationality?
Of course.

What did you do?
The 18 workers left sent a letter to Amey complaining about overwork, since those who were dismissed (and those who had left voluntarily) hadn't been replaced. We also complained about the way in which our colleagues were arrested and deported. Amey suggested a meeting to solve the problems set out in the letter and promised to look for solutions. But they did not honour the agreements we reached.

Moreover, Amey contracts temporary workers from time to time, on a low wage and without training, which is improper because in the workplace there are products which can be lethal for the cleaning workers and NPL. On 18 June 2008 one of these temporary workers climbed a railing to get out of the building, because that day he had finished late and didn't know how to get out, as the gate was already closed. The next day he was fired and the conditions of employment of the workers were changed to their detriment.

What happened then?
We demanded a meeting with the manager. We communicated with Prospect - the union we belong to - and on 20 June we met with Amey, who agreed to revoke the change in conditions. But on 10 July we received a letter ratifying the conditions we had complained about, and saying that they would be enforced as of 25 July. As they were.

How did the workers react?
There were only 11 cleaners left, all of whom belonged to Prospect, we decided to distribute some leaflets among the NPL workers, denouncing the violations and demanding solidarity. This resulted in the suspension of 5 members for 8 weeks, after this time we were dismissed. They claimed that we were damaging Amey’s image, and for that reason we couldn't continue working.

Do you consider this decision unjust?
Yes, because when they wanted to dismiss workers Amey followed the internal procedures. But when the workers complained, they did not recognise those procedures, did not respond to the grievance letter, and took a decision without following the correct procedure: which would have been to send the minutes of the meeting of 20 June to the affected workers.

Did Amey respond to that grievance letter?
Only two months later, three days before we were dismissed. In this letter they closed the case and didn't give us the right to appeal, which is illegal.

Were you informed in that letter of your dismissal?
No. We were dismissed at a disciplinary meeting called for 30 September. From the moment we arrived at the NPL installations, we were escorted by security and notified one by one of the decision. We were watched by security until the moment we left.

What were the arguments for this dismissal?
That we were damaging Amey’s image by telling NPL employees that they were violating the rights of the workers. But we had only told the truth.

Will you appeal this decision?
Of course, first of all we will do an internal appeal against the company’s decision, in order to follow the correct procedure. After we will lodge a claim to an Employment Tribunal

Do all of you who were dismissed have families?
Yes, we are all breadwinners in our families.

What is the current situation?
That of the 36 Latin American workers who were working for Amey on 1 December 2006, only 6 remain.


The case of Amey Plc seems to be typical of the working condidtions
many migrant workers face in the UK and the profit companies
make from their precarious situation. In our talk we will hear from workers
involved in those struggles and activists supporting them what their
experiences are to organise and what the perspectives of such self
organised struggles could be.

(Tea, Coffee and Refreshments will be available; and translation)