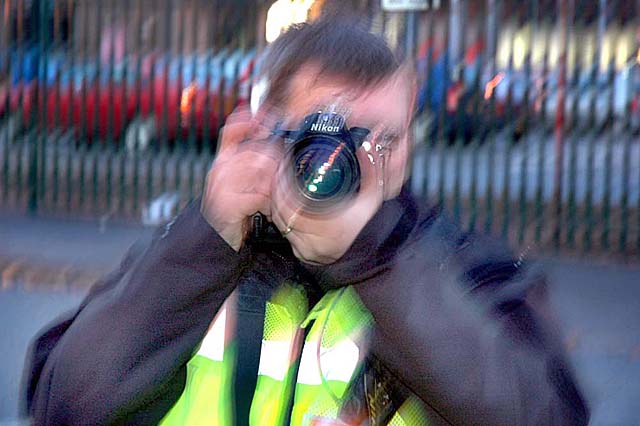 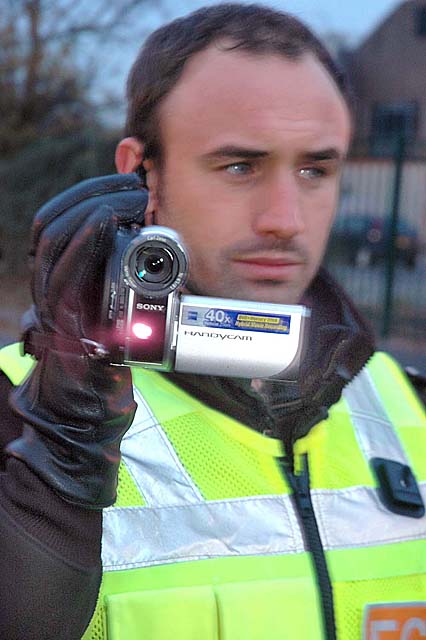 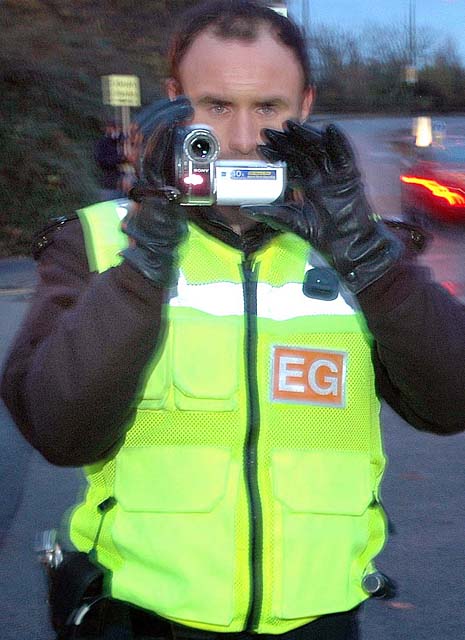 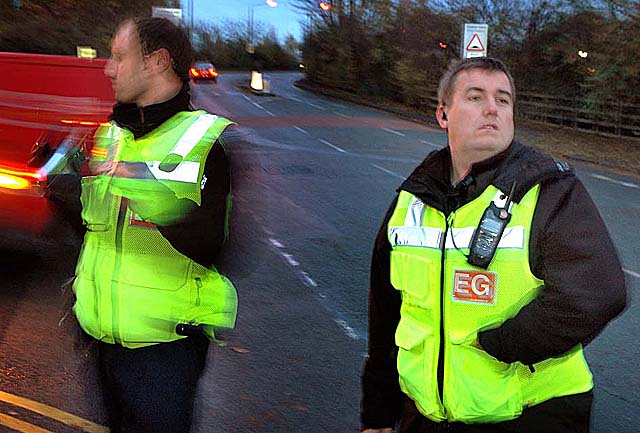 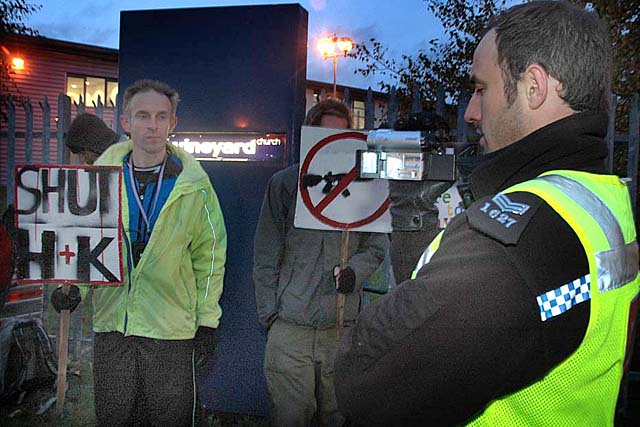 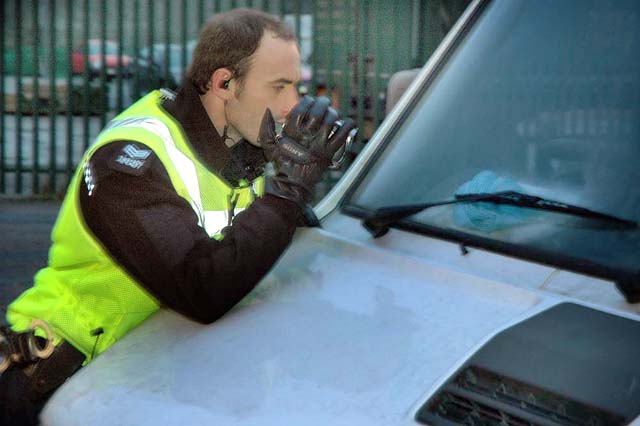 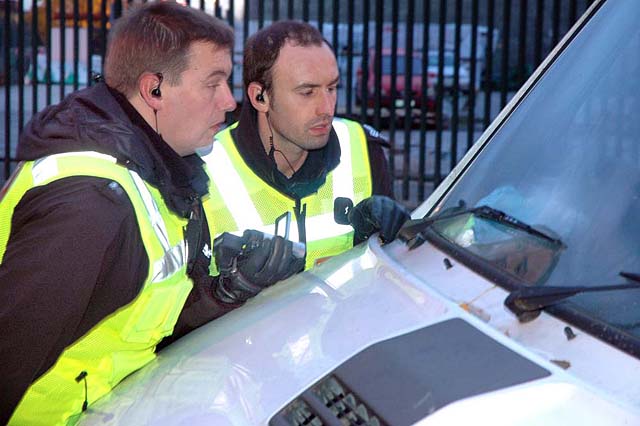 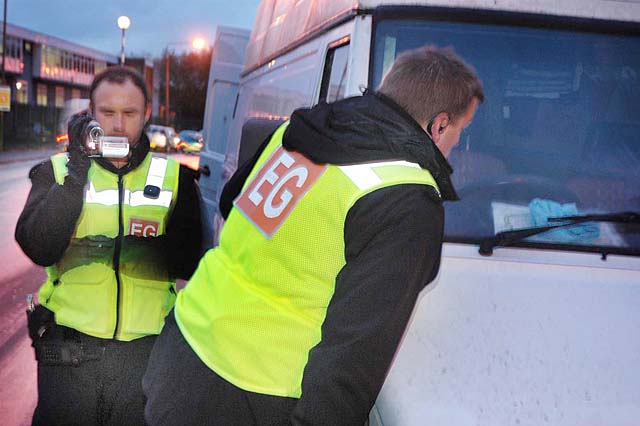 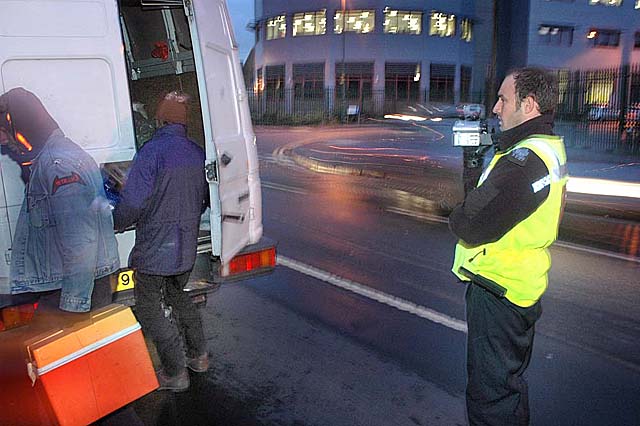 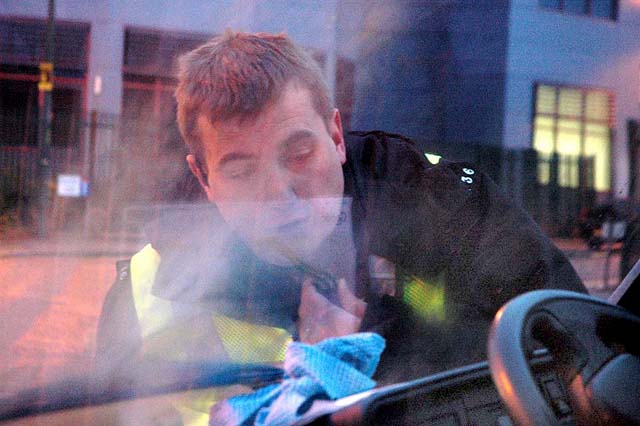 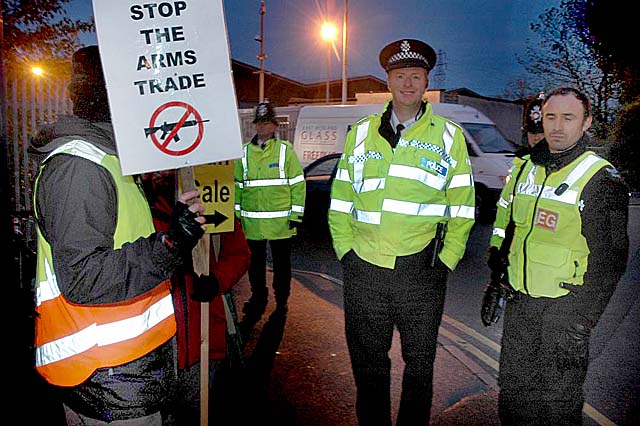 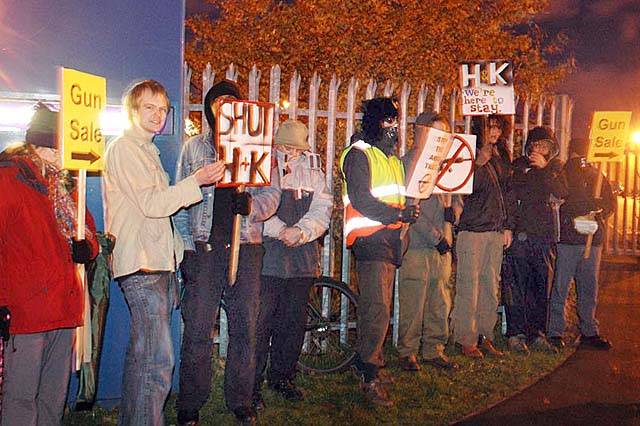 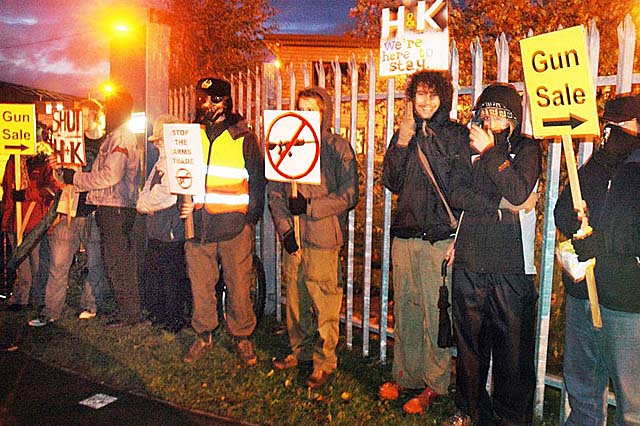 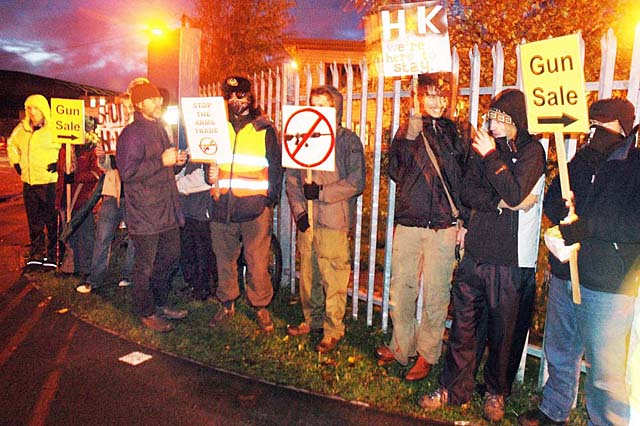 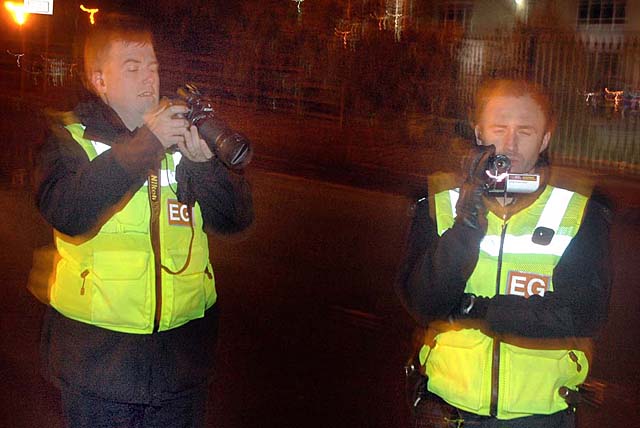 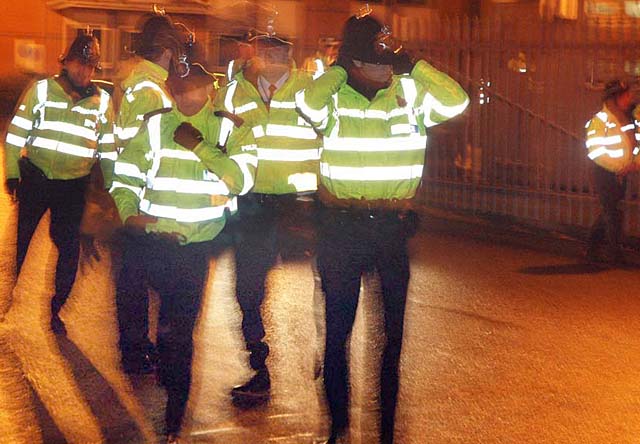 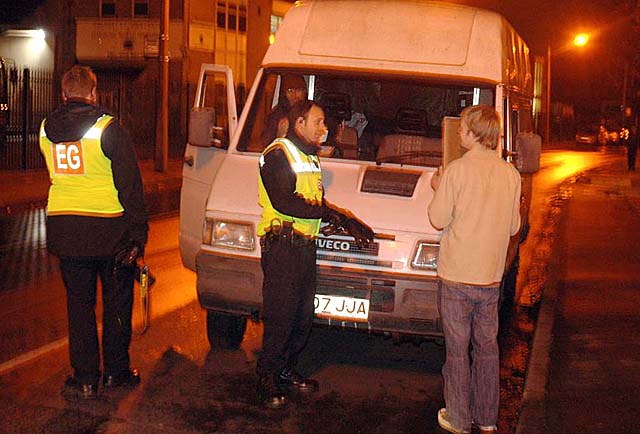 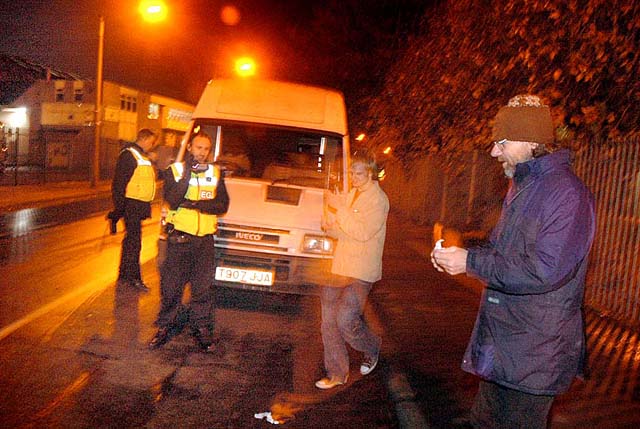 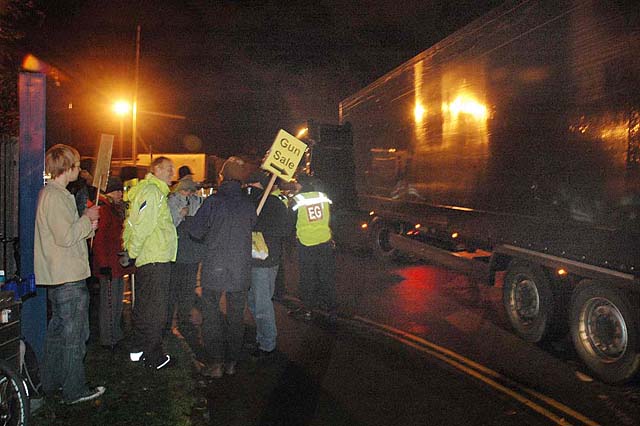 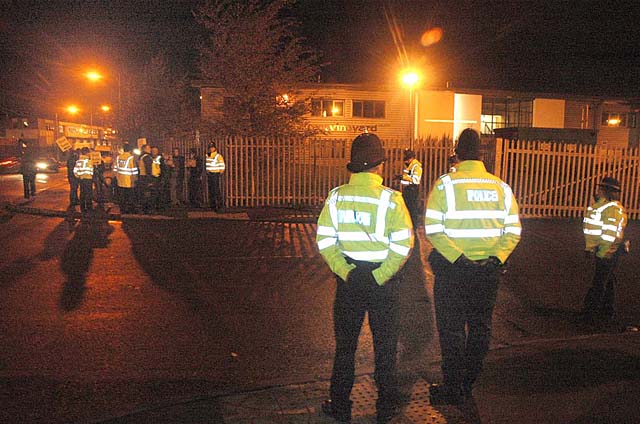 As with all previous demos here, the police appear to think it warrents a large turnout of officers. At least 25 - 30 this time in a two shift rotation! [having to change shifts within an hour for refreshments]. 2 serials and a few cars. As ever, the event was attended by 'evidence gatherers'. The actions here have attracted them in a number of guises. The local Nottinghamshire EG's, The Forward Intelligence Team of the MET Police [sometime accompanied by intelligence officers from other forces]. This time surveillance was carried out by yet another set of EG's. The filming is oppressive to many. They were in most protestors 'faces' and made sure they did all new arrivals, with the occasional passer by for heavens sake!

To those involved in lawful protest, this is a mystery on what evidence of wrongdoings, that they hope to record and gather. The only other explanation of course, is that such tools are applied with a view to intimidate those assembled from future attendance. As ever, they find my own presence at this [and other] event of this nature, interesting. This is yet a further example of what some of us face, daily. The NUJ is collating police actions of this type, and I continue to help with this process.

http://www.bjp-online.com/public/showPage.html?page=821710
[this is from my FOI requests]

Home Office Pledges to improve police relations with the press


Protesters were grateful for the arrival of the 'Veggies Van' bringing instant refreshments; hot drinks, gooooey cakes and samosas [for social change] . This exercercised the EG's yet more, making them much more animated. They filmed and photographed the unloading of the cake and drinks. They recorded various aspects of the van, and to some hilarity from those present, spent at least 20 minutes trying to document the piece of a 'google map download', that had been left on the van's dashboard. The route of a veggie delivery the previous day, apparently. Again, it would have been hard to imagine, the nature of any offence, they perceived. 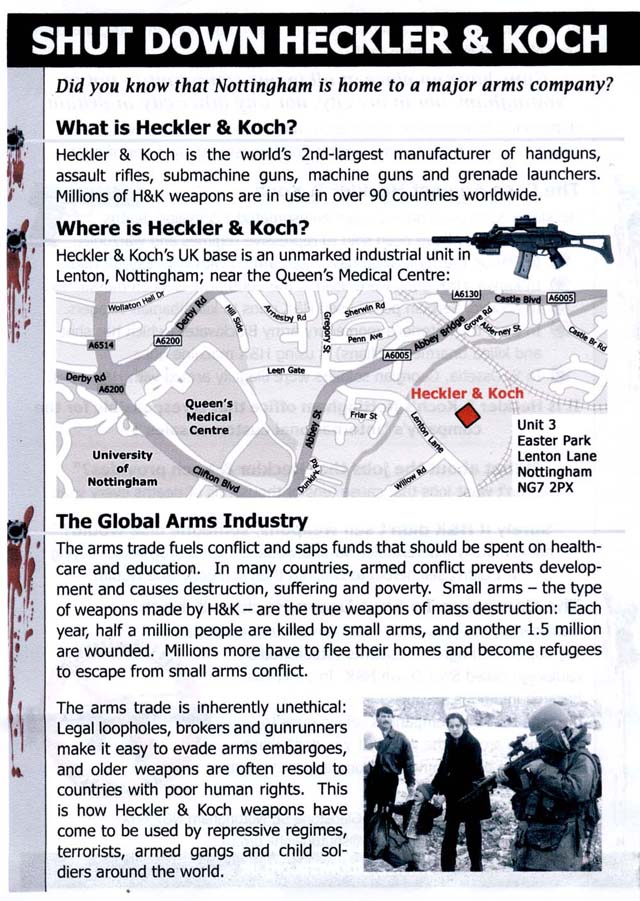 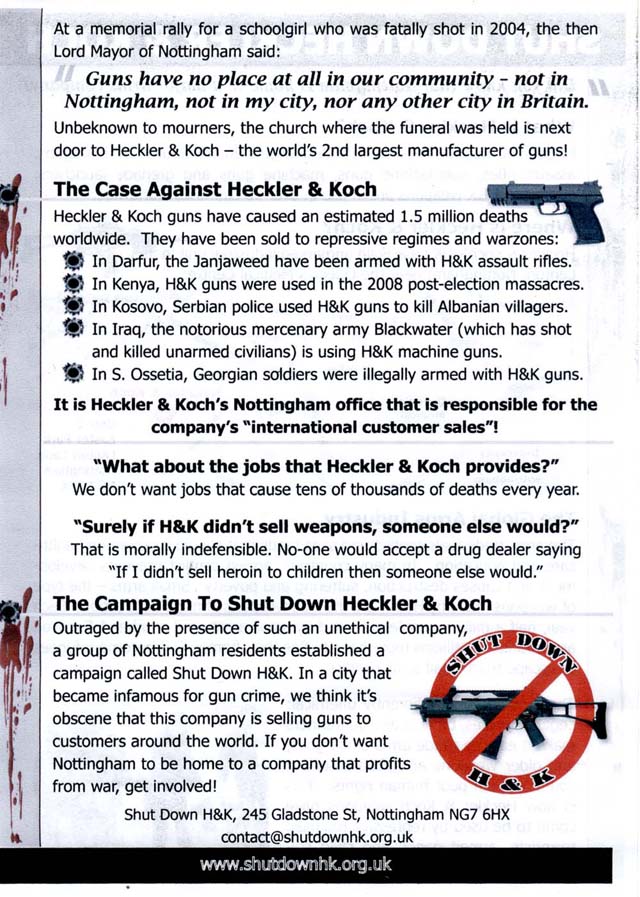 More info on what this campaign is all about

Police give H7K guns to kids to play with 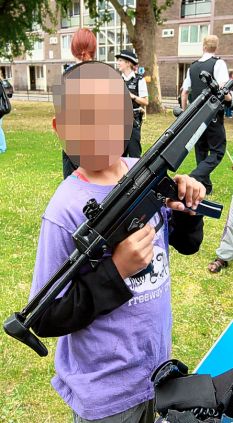 How sick is this?

Police are giving young children Heckler & Koch guns to handle at community events in England. At a recent summer fete in east London, the Met ran a stall displaying a H&K MP5 submachine gun. Children as young as seven were allowed to pose for photos holding the police weapon, which has a firing rate of 800 rounds per minute.
The stunt has been sharply criticised by MPs and anti-gun campaigners. MP Jim Fitzpatrick said “Giving young children real guns to handle is inappropriate. It could be glamorising the weapons and creating familiarity which is plainly wrong.”
George Galloway MP said “The foolish display at this festival can serve only to normalise firearms or make they appear attractive, even glamorous. We are tragically used to seeing images of primary school aged boys handling assault rifles in Liberia or Mogadishu, but in Limehouse?!”
Police defended the initiative, claiming that it is intended to “divert people away from gun crime”, but Lyn Costello, co-founder of Mothers Against Murder and Aggression, called it ”a serious error of judgment.”
And it seems that this event was not a one-off: “We’ve done this kind of thing in other places” said Superintendent Tarrant of the Met’s CO19 firearms unit. “We will continue doing it in future.”
Sources
BBC News website
Daily Telegraph.14th Aug 2008 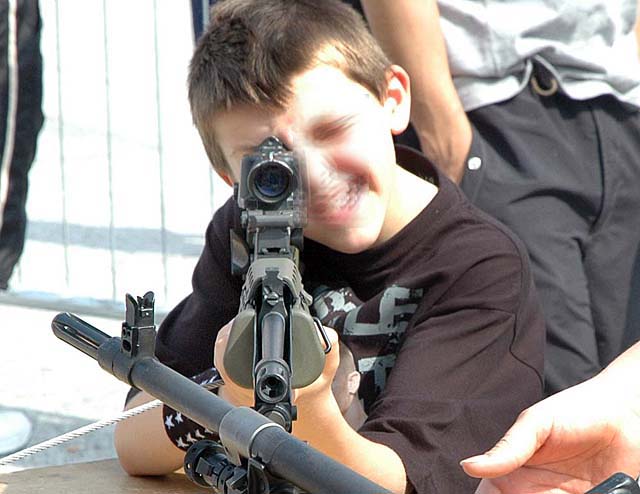 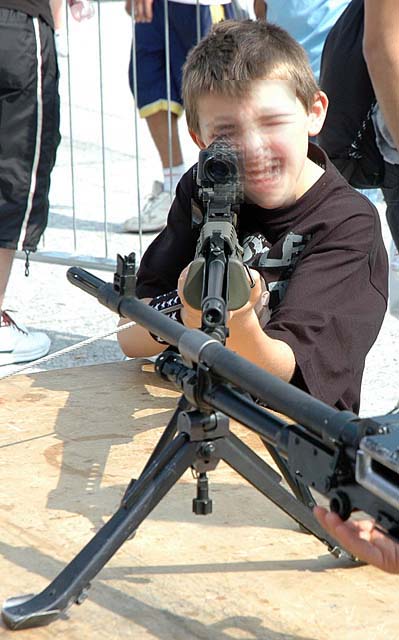 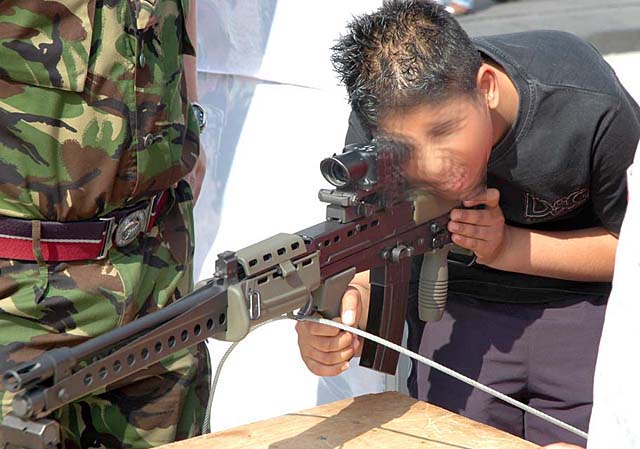 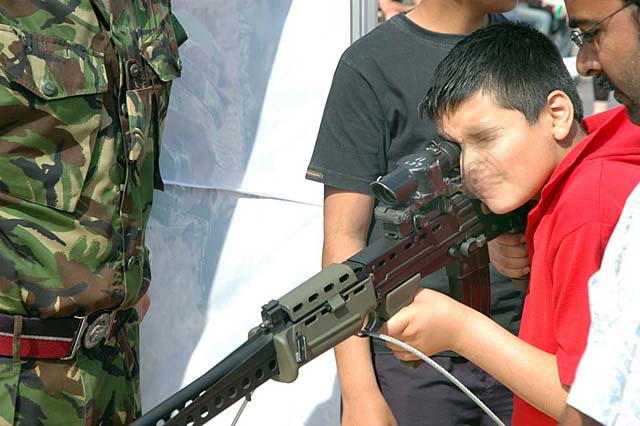 In May 2007, the Royal Air Force had landed with a large Display in Market Square, Nottingham.

At this exhibition, Royal Air Force recruitment, in particular, the RAF Regiment were doing a roaring trade in getting more young lads to play with the 'toys'. Thus to give them ideas of military careers.