Last nights Newsnight programme on BBC2 had a report on the opening of the new Oxford animal lab. It was one of the most biased pieces I have ever seen. 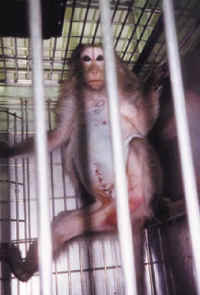 Jeremy Paxman made a biased introduction describing 'protests from so called animal rights activists'. So called? So is he saying that they are not interested in the rights of animals?

Evidence in support of animal testing was tagged with '..say scientists' as opposed to 'some scientists say' as many scientists do not support animal research.

The piece showed a shocking image of man trembling from Parkinsons disease but no shocking images were shown of animal suffering in animal experiments?

'Hundreds of charities have pledged their support for animal reasearch.' No mention of the many charities that do not.

The debate was mainly science based but only the speaker in favour of animal testing was a scientist.

I partly blame the representative from BUAV for keeping the debate around the why animal research is scientifically invalid. It's hard to win people over when on the side of vivisection you have a 'top neurosurgeon' debating with a full time activist. I think it's unwise to go debate science without being a scientist.