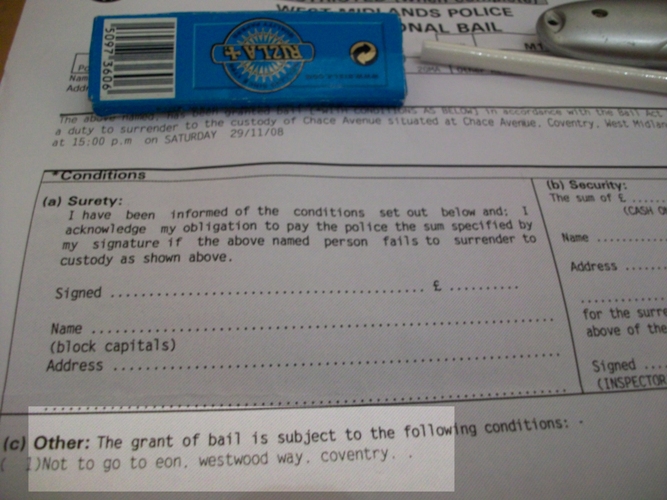 On the afternoon of November 10th, climate change activists’ occupied EONs Coventry headquarters in protest against plans to renew Kingsnorth coal fired power station. Activists' entered the building at around 2.30pm and conducted a noise protest for around 45 minutes, causing work to be severely disrupted. There was a direct confrontation with EON management when they attended the scene of the protest. A separate team simultaneously attempted to scale the outside of the building and drop a banner from the roof reading 'no new coal'. Unfortunately, one activist fell during the climb and broke his ankle, leading to the banner drop being aborted. Four activists were arrested on suspicion of aggravated trespass. Two were released without charge, and two have been bailed without charge until late November.

EON was specifically targeted because their plan to build Kingsnorth severely undermines efforts to fight climate change. According to the International Panel on Climate Change (IPCC), in order to avoid average global temperature rises of more than 2 degrees Celsius since 2000, the limit of what the planet can tolerate before feedback cycles make climate change cataclysmic (ref1), global CO2 emissions need to start to fall before 2015 (ref 2). In order to achieve this we need a massive reduction in energy consumption, a move to renewable energy sources and micro-generation of energy. In this climate building a coal fired power station, burning the dirtiest form of energy available, is suicidal.

EON have been attempting to greenwash their plans to build Kingsnorth, claiming that the addition of Carbon dioxide Capture and Storage (CCS) technology will make the power plant more environmentally friendly.

However, it is unclear whether Kingsnorth is even due to be fitted with CCS, as EON have made no guarantee that if a bid for government funding to fit the technology fails, they will finance it themselves (ref 3).
Even if Kingsnorth is fitted with CCS, the efficiency of this process is dubious in that CCS itself uses up to 40% of the energy produced by the power station, depending on the method (ref 4). Additionally, only 20% of the station would be fitted with CCS, meaning the other 80% would be emitting CO2 as normal. Therefore, Kingsnorth would still produce almost twice as much CO2 as a gas power plant generating the equivalent amount of electricity (ref 5), and of course massively more CO2 than from renewable sources.

The government is due to make a decision on whether to approve plans to build Kingsnorth in the near future, which would be the first new coal fired power station to be built in the UK for over 30 years (ref 6). If approved, EON will face resistance not only at the Kingsnorth site, but also around the country as demonstrated by last Monday’s action.