The masters of economic disaster are back

It's not as if we at BAR didn't warn you. Barack Obama's first major act as
president-elect was to select as his chief of staff Rep. Rahm Emanuel, whose
"role as Chairman of the Democratic Congressional Campaign Committee was to
insure that anti-war and other progressive candidates stayed out of the
running." So when do the protests begin? "Progressives for Obama and other
groups who promised to hold their idol accountable haven't gotten around to
doing so just yet or even announcing when the time will be right for their
tongues to become untied." 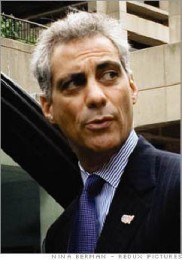 "The masters of economic disaster are back."

The difficult task of bringing a skunk to the post-election celebration is
left to the same people who have chosen critical thought over self-induced
hypnosis for the past year. Within a mere 24 hours of being elected
president, Barack Obama told this group they were right all along.

The first major transition announcement was the appointment of Congressman
Rahm Emanuel to the position of chief of staff. In 2006, Emanuel's role as
Chairman of the Democratic Congressional Campaign Committee was to insure
that anti-war and other progressive candidates stayed out of the running. If
they did manage to run the gauntlet of Emanuel's influence and fund raising
prowess used to defeat them in primaries, their agenda was kept off the
table, dead, buried and doomed never to see the light of day.

So great was Emanuel's determination to keep Democrats from acting like
democrats, that he nearly cost the party the majority victory it achieved
that year. His hand picked cadre of 22 candidates didn't do very well. Only
9 of them [1] won their races. The ultimate Democratic party victory
occurred in spite of the boy wonder, not because of him. While voters turned
against Bush and the Republican party precisely because of Iraq, wonder boy
Emanuel clung to a losing strategy because it served his purposes of
maintaining the supremacy of the neo-con agenda.

If it is difficult to believe an Obama detractor, believe Emanuel's father,
a former member of the Irgun, the Israeli terrorist group. Dr. Benjamin
Emanuel [2] told an Israeli newspaper, "Obviously he will influence the
president to be pro-Israel. Why wouldn't he be? What is he, an Arab? He's
not going to clean the floors of the White House." Indeed he will do no such
thing. Instead he will have the president's ear every single day and keep
his agenda front and center.

"Emanuel's role as Chairman of the Democratic Congressional Campaign
Committee was to insure that anti-war and other progressive candidates
stayed out of the running."

President elect Obama's first press conference made the point very clearly.
Iranian president Mahmoud Ahmadinejad sent him a letter [3] of
congratulations and warm wishes, one of many that arrived from world leaders
to the new president elect. So great is antipathy towards Iran and its
leader that Obama would not even admit to having read Ahmadinejad's message.
"I am aware that the letter was sent. I will be reviewing the letter from
President Ahmadinejad and we will respond appropriately."

He went on to repeat the awful mantra of threats toward Iran because of its
possible development [4] of a nuclear capability. "Iran's development of a
nuclear weapon I believe is unacceptable. We have to mount an international
effort to prevent that from happening." He stopped short of saying how it
would be stopped, but in the past he said that the military option should
not be "taken off the table." Progressives for Obama and other groups who
promised to hold their idol accountable haven't gotten around to doing so
just yet or even announcing when the time will be right for their tongues to
become untied.

While Rahm Emanuel will decide who will and won't have access to the
president, the masters of economic disaster are back. During the Clinton
administration, advisers such as Robert Rubin and Lawrence Summers destroyed
the government's system of financial regulations that protected Americans
for decades.

"Progressives for Obama haven't gotten around to announcing when the time
will be right for their tongues to become untied."

Summers is now under consideration for the post of Treasury Secretary. Not
only did he put in motion the forces that led to the current world wide
economic crisis, but as senior economist at the World Bank, he wrote a memo
calling for poor nations to become dumping grounds [5] for toxic waste.
"Just between you and me, shouldn't the World Bank be encouraging MORE
migration of the dirty industries to the LDCs [Less Developed Countries]?"
"I think the economic logic behind dumping a load of toxic waste in the
lowest wage country is impeccable and we should face up to that." "I've
always though that under-populated countries in Africa are vastly
UNDER-polluted . . ."

The best advice given to Obama comes from a man he probably will never speak
to, Mahmoud Ahmadinejad. "I hope you choose the true interests of the
people, fairness and justice over the insatiable demands of [a] small
self-interested minority, and make the use [of] this opportunity to serve
and leave a good name and legacy behind."

Poor Ahmadinejad just doesn't get it. The American political and economic
systems demand the opposite of fairness and justice and guarantee that
self-interested and unrighteous minorities have complete power. As for
serving and leaving a good name behind, Obama doesn't have to worry about
that. His name should be mud but no matter what he does, it isn't.

Margaret Kimberley's Freedom Rider column appears weekly in BAR. Ms.
Kimberley lives in New York City, and can be reached via e-Mail at
Margaret.Kimberley(at)BlackAgandaReport.Com. Ms. Kimberley maintains an
edifying and frequently updated blog at freedomrider.blogspot.com [6] . More
of her work is also available at her Black Agenda Report archive page.