If the local comic is to be believed, the demolition site that is all that is left of what was once Farnborough town centre will be open for Christmas shopping by 2009. 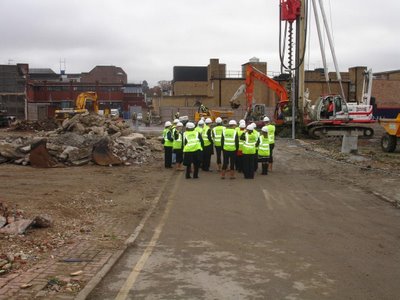 
If the local comic is to be believed, the demolition site that is all that is left of what was once Farnborough town centre will be open for Christmas shopping by 2009.


'We have the drawings, we have had the demolition, and now we got the construction,. There have been problems, but they have been overcome. Today we see the result of that.' -- Peter Moyle, council leader, Rotten Borough of Rushmoor

The local comic has yet another puff piece for St Modwen. A juvenile hack regurgitating press releases from St Modwen and the Rotten Borough of Rushmoor and passing them off as news. These puff pieces appear with monotonous regularity, averaging about four a year for the last five years. They are always the same, exciting new town centre redevelopment about to begin, new town centre open for business next year, or anytime soon, conveniently omitting to mention that Farnborough had a perfectly viable town centre until St Modwen came along and destroyed it. Not for nothing are they known as The Developer from Hell.

St Modwen through a Kuwaiti-financed front-company KPI bought Farnborough town centre over ten years ago. They have driven out most of the retailers, demolished half the town centre, demolished social housing of 28 maisonettes. The town centre was demolished last summer, the maisonettes this summer. Not a lot has happened since. Men walk around, diggers move up and down, piles of rubble move about.

If previous puff pieces in the local comic were to be believed, we'd all be shopping in an exciting new shopping centre this Christmas. The reality is one huge demolition site. Within the last few weeks, Rok Construction have moved on site and started pile driving.

With the St Modwen share price falling and the Independent recommending that you are better off burying your money in the sand than investing in St Modwen, it is touch and go which will happen first, the completion of St Modwen's project in Farnborough or the collapse of St Modwen. Rok Construction who are carrying out the construction work would be well advised to get paid up front.

To the relief of many who have not yet had their towns trashed, St Modwen are pulling the plug, projects are on ice or have been scrapped. Hatfield was not so lucky, their town centre has been trashed, then abandoned. Not for nothing is St Modwen known as The Developer from Hell. The only reason the Farnborough project is still going ahead is because it is financed by Kuwaiti money.

St Modwen claim they have lots of retailers lined up to move in. Who are these retailers who dare not say their name? The reality is retailers are moving out. The best St Modwen have managed to achieve is a shop selling tat for Christmas, a shop that will be gone by the New Year.

During the summer St Modwen had hoardings showing all the new shops they had lined up. A few people were fooled. Those who looked a little closer saw these were fake shops with fake names. A clear case of 'passing off', using brand names of other companies to enhance ones own piss-poor reputation.

The hoardings have now been replaced with ones showing the St Modwen yuppie flats that will be above the supermarket and nightclub/bars or whatever the leisure space will be used for. The flats will overlook the supermarket car park and the back yard delivery yard for the supermarket. A delivery yard that will have 24 hours deliveries, and if you want to know what hell that is, ask the residents who overlook the Asda delivery yard. The pictures outside the sales cabin for the yuppie flats shows them overlooking wooded parkland! No one knows where the wooded parkland is but it sure ain't Farnborough town centre.

St Modwen claim the flats are selling well. The reality is four have been sold! Foolish to have bought, even more foolish if they paid the original asking price when it will be worth half that by 2010.

Nearby Camberley has a new shopping centre. Retailers are not exactly queuing to get in. All that has happened is retailers are spread more thinly around and have abandoned the town centre.

The Camberley experience should serve as a warning for Aldershot. The proposed centre next to Tesco will kill off what little is left of the town centre. A town centre that consists of boarded-up shops and an empty shopping centre.

Even before the credit crunch hit, retailers were looking to get rid of up to a third of their property portfolio in order to remain in business. Now that the credit crunch has hit, retailers are on their knees, Woolworths is up for sale for a pound. Why would any retailer wish to move into Farnborough, a town centre that has been killed dead by a property developer, aided and abetted by the local council?

Farnborough once had a viable town centre, many and varied shops, many small independent shops, family businesses that had been there for a quarter of a century or more. All have now gone. Farnborough used to have an infrequent farmers market. It has gone. The Tuesday market is a shadow of its former self. Social housing has been destroyed to make way for a car park for the superstore. All for what? A large superstore in an area saturated with superstores, with a handful of what are likely to be empty retail units at the back of the superstore. What little remains of the town centre will be around the back of the superstore. The superstore competing with the existing Asda superstore, is likely to kill off what little retail is left.

Is it any surprise that local people choose to go shopping in Guildford, Farnham, Alton, indeed anywhere other than Farnborough, and adding yet another superstore is not likely to bring them back.

Peter Moyle, council leader who has for the last five years had regular meetings with KPI/St Modwen and promotes their agenda, made the ludicrous claim:

How? Many retailers have seen their businesses fold, the few that survive are not taking in anything like they did in the past. People have lost their jobs. The superstore and the High Street retailers St Modwen claim they will attract, will drain money out of the local economy. The people of Rushmoor have lost the diversity of choice they once had.

One town has a monkey as mayor, the Rotten Borough of Rushmoor has to make do with a clown as council leader.

Sustainable development this is not.

Keith Parkins, Gaviotas, to be published