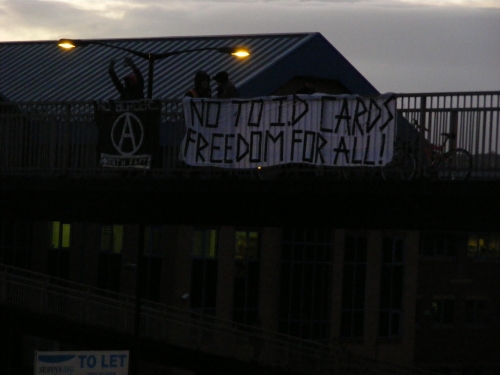 This morning, during the peak rush hour time of 7.30 - 9.00 am, 4 activists from No Borders North East performed an anti-i.d card banner drop from a bridge over one of the city's busiest inner motorways. The largest banner read "No To ID Cards, Freedom For All!" and was accompanied by a smaller No Borders banner.
The reaction from the drivers below was overwhelmingly positive, with many honking horns, waving and giving thumbs up.

Today sees the start of the ID card scheme, with non-EU citizens applying for, or renewing visas for study or marriage, being made to carry a card and have their details put on the Government's database. Immigration law already gives the Home Office powers it would like to exert over everybody. Under a cloud of anti-immigration hysteria the government is increasing it’s social control and attempting to usher in unprecedented powers of surveillance over the whole population.

This was just one of a series of No Borders protests against the scheme, with many others happening across the country today and throughout the week.

Hi,
the police came along while we were doing it, but didnt seem to have any problem with it. Interestingly however, they said that an anarchist symbol can be deemed offensive and thus removable under a public order act (?!). We told them that our No Borders banner with a large anarchist symbol wasn't in fact anarchist related, and they believed us for some reason.... ;)