Solihull protest against the imposition of biometric ID cards on migrants

Yesterday Noborders Birmingham protested against the imposition of biometric ID cards at the UK Border Agency Office in Solihull. They were met by a puzzling disproportionate police response at Dominion Court, 41 Station Road, Solihull - around 12 police officers, including 3 police vans and an evidence gatherer. This may have something to do with the policing of a previous protest around the corner at Sandford House, the home office reporting centre, where hundreds of Congolese demonstrators facing mass deportation occupied the main road 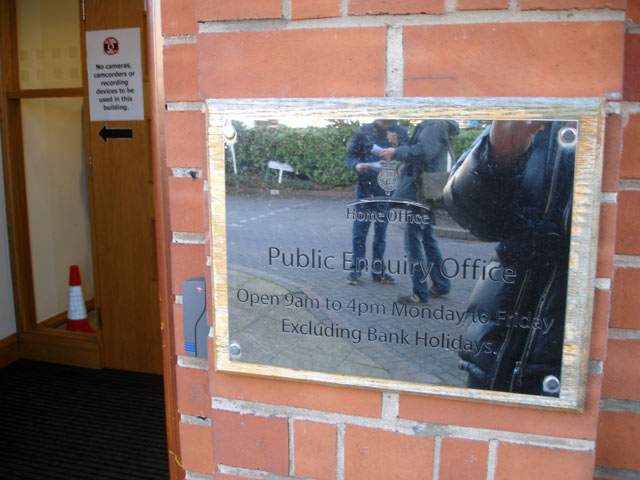 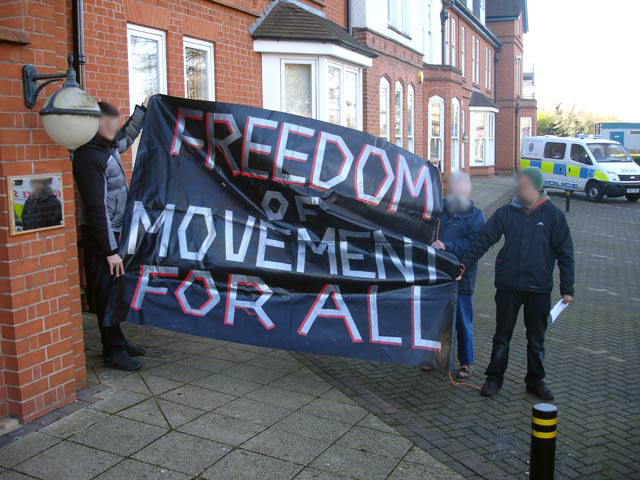 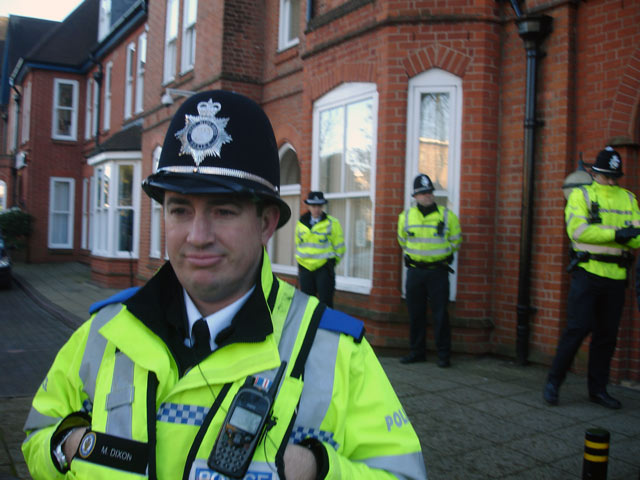 'We can facilitate your protest' 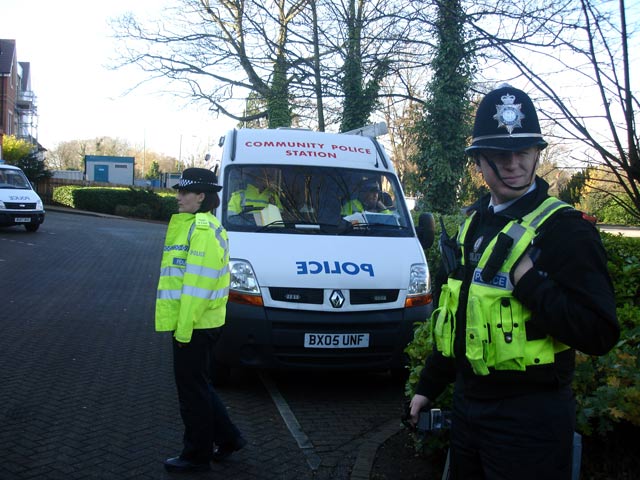 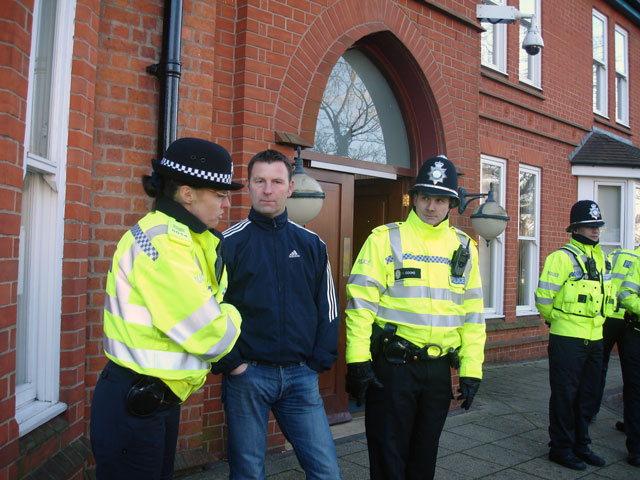 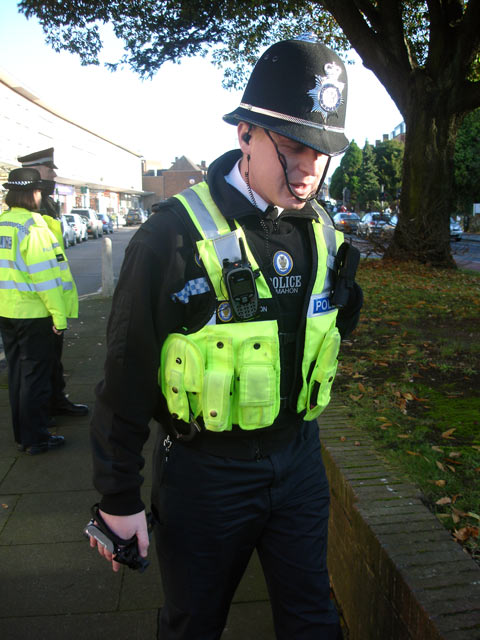 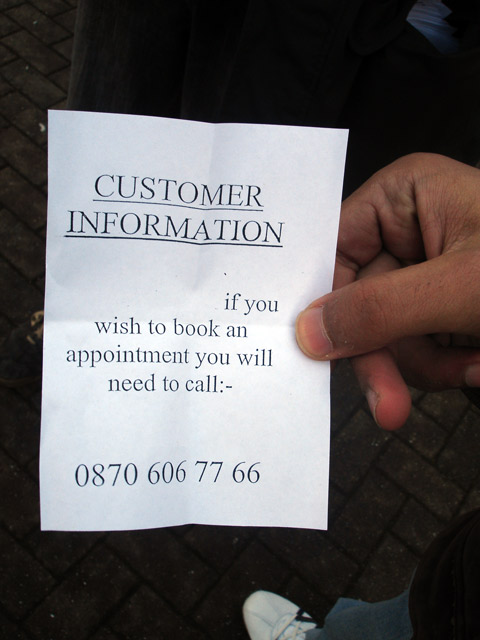 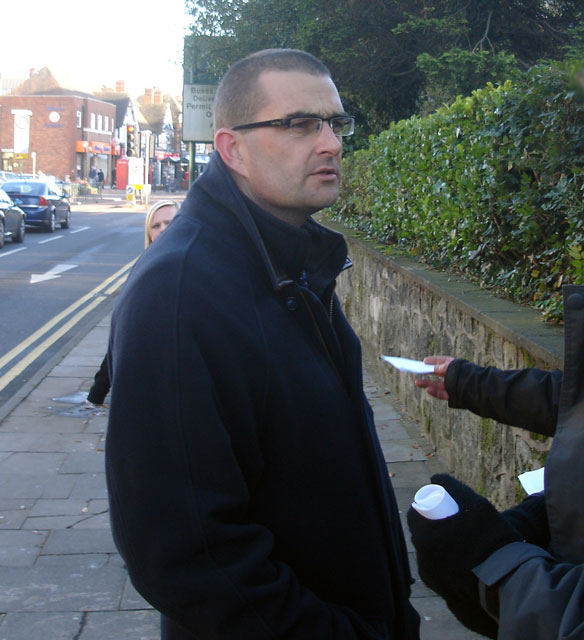 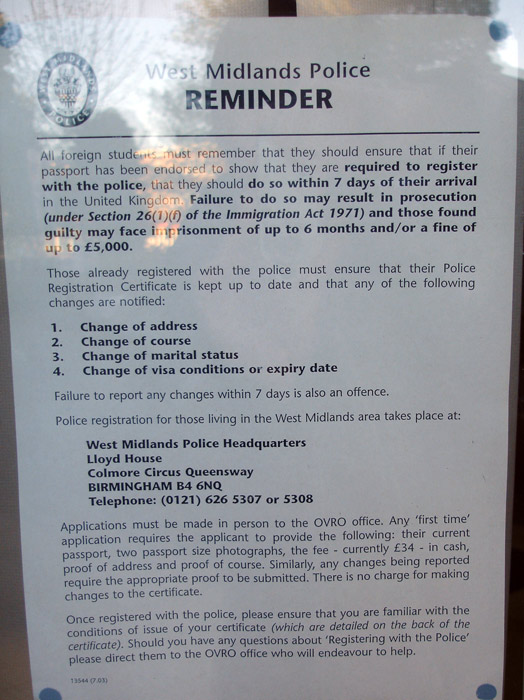 A banner proclaiming 'Freedom of Movement for All' was held by the entrance of the UK Borders Agency Office. The police offered to 'facilitate' our protest by a seemingly polite offer to arrange for a metal barrier to hang our banner from. However, we realised that the six foot high hedge in front of the building would make our protest invisible to almost everyone, so instead we hung our banner by the main road and distributed around 600 leaflets to some very interested members of the public.

Following a concerned report from a dedicated community police officer earlier in the day, two equally committed council workers from the environmental and health department at Solihull Council turned up in their lunch hour to ensure that the literature being distributed was of a political, rather than commercial, nature and thus would not run afoul of local bye-laws on littering/flyering (no one seemed quite sure). This follows several other incidents known to us in central Birmingham where council officials have attempted to apply similar bye-laws (with accompanying threats of fines and court appearances) to dissuade people from handing out political literature. It has been noted before that the parliamentary legislation which serves as the basis of these bye-laws specifically exempted materials of a political nature. The council workers also showed some interest in the banner, raising concern over the manner of its attachment to some local shrubs and something else about private property, but in the end they seemed to decide that neither the public nor the shrubs were at any risk (potential, real, or otherwise) and returned to what remained of their lunch hour.

Two students from Pakistan informed us that they had to book an appointment to begin the biometric ID card process and they couldn't return home until this had been completed. They claimed today they were told by staff that they would be required to give blood samples and have iris scans for their biometric cards so if they committed any 'crimes' in the UK they could be identified immediately. It appears that the private company contracted to the tune of £5.6 billion, and entrusted with sensitive biometric data, are already doing their best to impress upon applicants that ID cards will be effective at 'fighting crime'. Liberty, the civil liberties and human rights organisation, have already expressed concern about the Government’s ability to safeguard individual’s intimate details on the National Identity Register after Government departments last year lost 30 million pieces of personal data, including those of 25 million child benefit claimants. 'We have ID cards in our country but they aren't biometric' said one of the students. 'It feels very discriminatory that we are being targeted first. Why aren't they processing UK nationals first?' The international students also pointed out that this was costing them a great deal of money. Not only did they have to pay exorbitant fees for their courses but on top of that they have to pay £300 for their visas and now they have to pay for their biometric ID cards and they are only permitted to work 20 hours a week. They also added that these measures would serve to put overseas students off studying here citing Australia as a more welcoming alternative.

The use of foreign nationals as guinea pigs for the more widespread introduction of ID cards is a strategy to run a testbed for the technology on people without a voice. It has become apparent that the government is likely to pick off certain sections of the community in Britain one at a time. This divide and rule strategy has been used throughout history, most notably by the Nazi regime in Germany.

When the British government came for the migrants,
I remained silent;
I was not a migrant.

When they came for the convicts,
I did not speak out;
I was not a convict.

When they came for the students,
I did not speak out;
I was not a student.

When they came for me,
there was no one left to speak out.