Top of the Food Chain

Today comes the startling news of a British government report showing a drop in oceanic zooplankton of 73 percent since 1960. 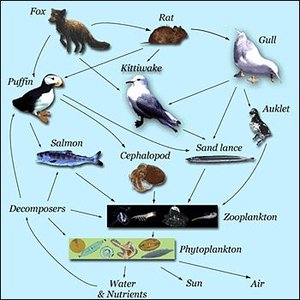 For many people, this may seem relatively inconsequential as compared to daily cataclysmic revelations about the state of the national and global economy. This reaction is understandable: we care first and foremost about our own immediate survival prospects, and a new and greater Depression will mean millions losing their homes, millions more their jobs. It's nothing to look forward to.

At the top of the global food chain sits a species that we really do care about—Homo sapiens. The ongoing disappearance of zooplankton, amphibians, butterflies, and bees is tied directly or indirectly to the continuing growth of our own species—both in population (there are nearly seven billion of us large-bodied omnivores, more than any other mammal) and in consumptive voracity (water, food, minerals, energy, forests—you name it).

It's at this point in the discussion that some of us start feeling guilty for being human, and others of us tune the conversation out because there's apparently not much we can do to fundamentally change the demographic and economic growth trends our species has been pursuing for hundreds, if not thousands of years.

But the current economic Armageddon (that we care about) is related to human-induced biodiversity loss (that many of us don't notice) in systemic ways. Both result from pyramid schemes: borrowing and leveraging money on one hand; on the other, using temporary fossil energy to capture ever more biosphere services so as to grow human population and consumption to unsustainable levels. Our economic pyramid is built out of great hewn blocks of renewable and non-renewable resources that are being made unavailable to other organisms as well as to future generations of humans.

The financial meltdown tells us these trends can't go on forever. How the mighty have fallen!—Masters of the Universe reduced to begging for billion-dollar handouts in front of a television audience.

Next will come a human demographic collapse (resulting from the economic crisis, with poor folks unable to afford food or shelter), as mortality begins to exceed fertility.

In all of this it's important to remember that the species on the lower levels of the biodiversity pyramid have been paying the price for our exuberance all along.

The pyramid appears to collapse from the top, while in fact its base has been crumbling for some time.