The Space Hijackers met in Topshop in Oxford St to show that you can get a new fashion look without having to spend money by simply swapping your clothes with others. Photographs copyright (C) 2008, Peter Marshall 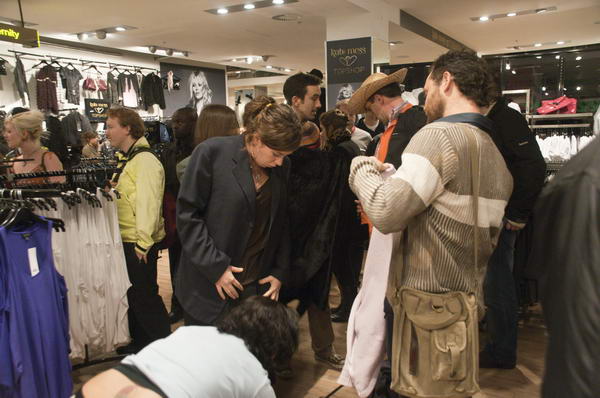 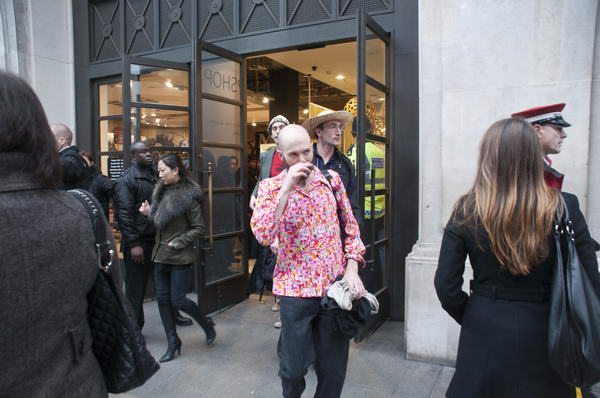 Swoppers turned out onto Regent St 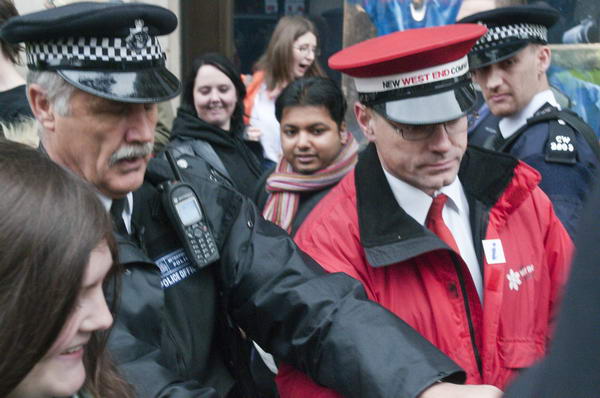 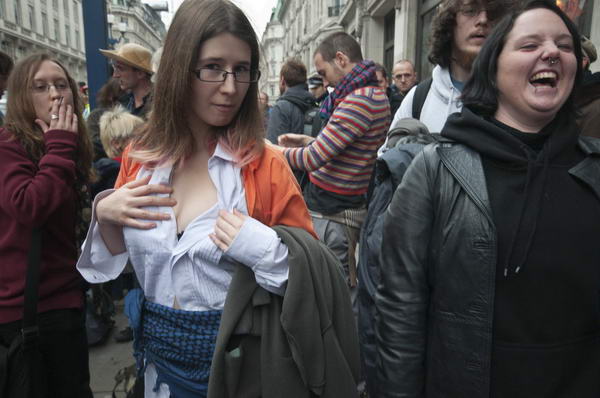 Posing for the photographer 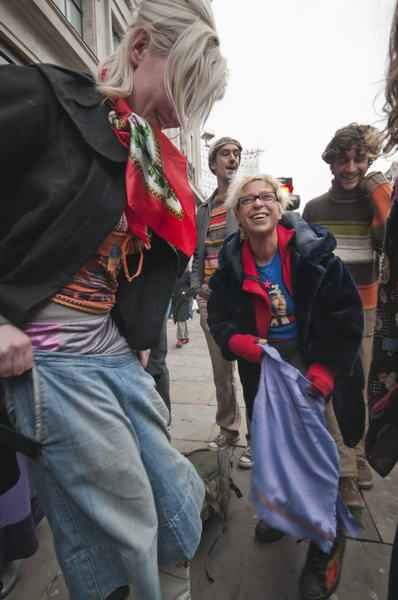 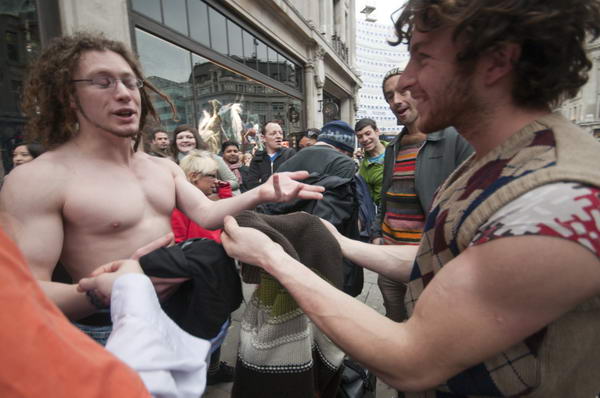 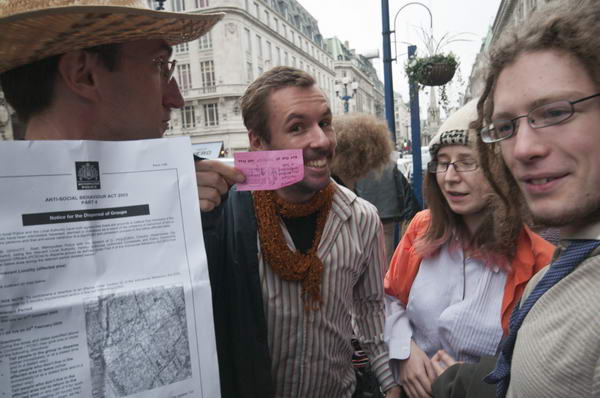 Chance Card "Get out of Topshop Jail Free" and Dispersal Notice

"Take your clothes off! Swap them with your friends for FREE!" was the message from the Space Hijackers

http://www.spacehijackers.co.uk/html/welcome.html, who decided to set up their clothes swap - "the restyling fashion mash-up event of the year" - on the lower ground floor of TOPSHOP at Oxford Circus. The idea was to demonstrate that "we don't need to spend money we don't have on things we don't need."

The action, designed as it was to subvert one of the iconic temples of consumerism seemed to baffle police and didn't amuse the security staff, who stopped me taking pictures there. One other photographer was manhandled out of the store, but I was treated very politely, with several security men standing between me and the action and telling me that photograph was not allowed. On of the store managers even offered to personally help me find any clothes I might wish to buy elsewhere in the store, a possibility I found most unlikely.

I left the store (with a rather large escort until I left the premises) and walked around to the side exit where I expected the clothes swappers to be ejected, arriving just before they emerged, and was able to photograph them continuing to swap clothes on the pavement in Regent Street. Here one policeman did attempt to prevent me from taking pictures, claiming I was causing an obstruction (which clearly I wasn't) and as usual I moved back a couple of feet before returning to take pictures when he moved away.

Things did threaten to get out of hand when a rather elderly police officer (at my age all policemen are supposed to look young), helped by a 'Red Cap' (rather sinister private security wardens employed by the 'New West End Company' to ensure shoppers don't step out of line) started to push people around, but mostly other officers took a more sensible approach, some even talking and joking with the swappers as they continued to exchange items of clothing on the pavement.

Some shoppers passing by stopped to watch, and a few took a leaflet, but there was no evidence of any Damascene conversions, most hurrying on clutching their loaded shopping bags, desperate to spend more money.

One of those taking part was held by the police for a while as they had decided he was the ringleader. He got a big cheer when he was released, waving his pink 'Get out of TOPSHOP Jail Free' Chance Card and the Anti-social Behaviour Act Notice for the Dispersal of Groups (see

http://www.opsi.gov.uk/ACTS/acts2003/ukpga_20030038_en_5 ) which the Met had issued. This required him to leave the Oxford St/Regent St area for the next 24 hours. Fortunately the map provided didn't include the Red Lion, where he announced his intention of going - and at this point I also left as I was already late for a meeting with friends in Streatham. Some of the others looked as if they were going to continue their fun along Oxford Street.

A few more pictures on

All in all, I think it was a good action.

around 30-40 people turned up and swapped clothes, hundreds of leaflets were handed out on oxford street before the action, and when it did happen, TopShop had a shop full of Police, PCSO's and security, they closed the entrance to the shop and removed the 'red phone box' meeting point display.

Lots of literature was handed out, and plenty of pretty activist flesh, (oh my).

two arrests happened, one for refusing to give a name and address (section 50 of the Police Reform Act) apparently it was anti-social behaviour. On the contrary I thought it was incredibly social behaviour show by the hijackers. Both arrests were released without charge fairly swiftly. Although one was driven to Trafalgar square and dropped off there for no apparent reason?

Later on the actions continued with a street party in Kingly Court shopping centre, and then a road blocade at Seven Dials with plenty of dancing.

thanks to all of the non-shop swappers and to the lovely people who swapped their clothes with mine for the great new outfit I have.