Christmas is Canceled for E.on

The weekend of the 28th November saw a national, two days of action against E.on and new coal. E.on are responsible for to plans to build a new coal fired power station at Kingsnorth in Kent. 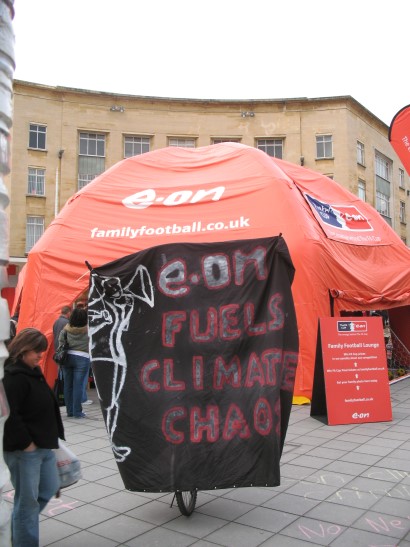 Whilst the government is calling for a 80% reduction in carbon emissions by 2050 this new power station will emit between 6 and 8 million tons of CO2 every year. That’s equivalent to the annual emissions of Malawi’s 13 million people or more CO2 than Heathrow’s third runway would burn.

People across the country mobilized to voice there concerns at E.on worrying endeavor.

In Bristol activists disrupted an E.on promotional event in the centre of town. Whilst E.on attempted to sell new customers there so called ‘green’ package fliers where distributed to alert the public to there un-sound environmental practices.

Father Christmas, ditched the sleigh for a well decorated bike. Visiting the premises of E.on’s investors Scottish Power to tell them Christmas was canceled.

Later in the day a street party attended by over 50 people, equipped with sounds system and free cake, managed to force the city centre branch of NatWest to close early and left the RBS branch covered in cake!

more picture can be found here