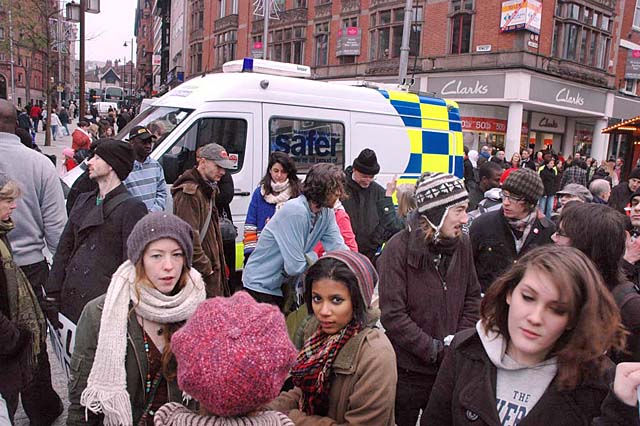 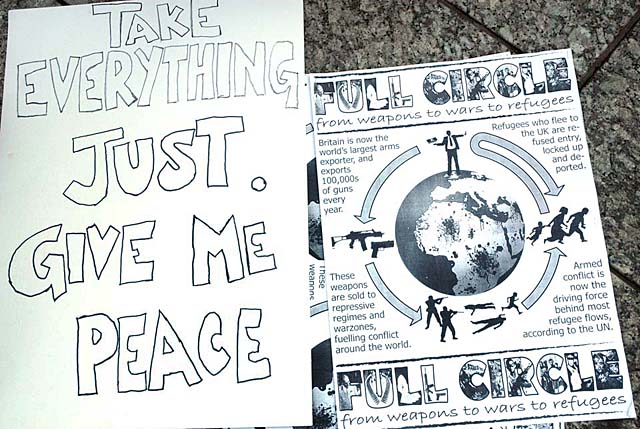 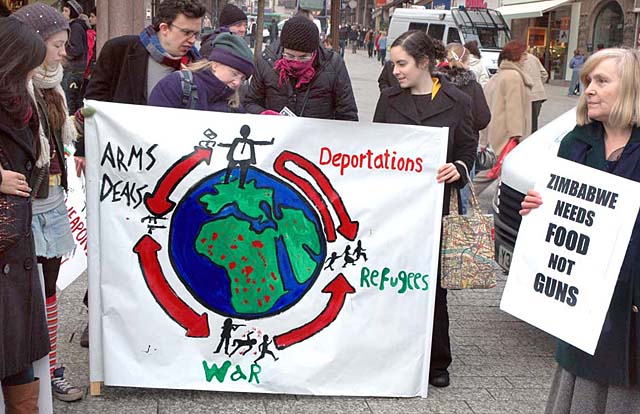 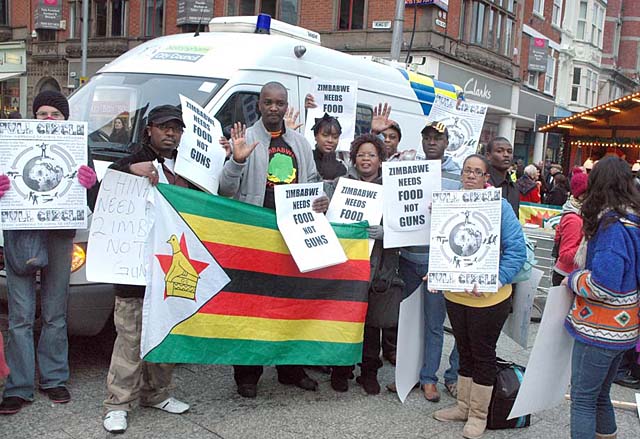 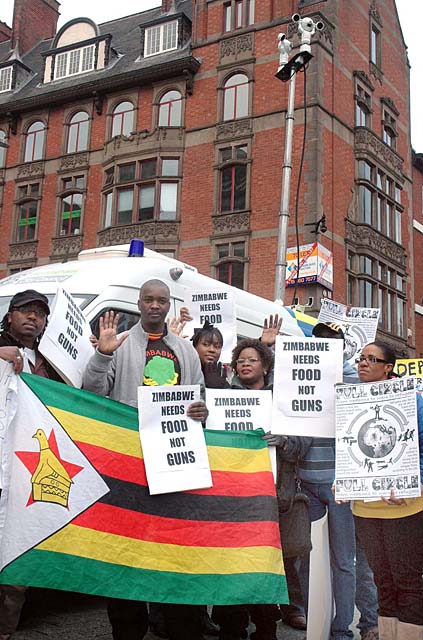 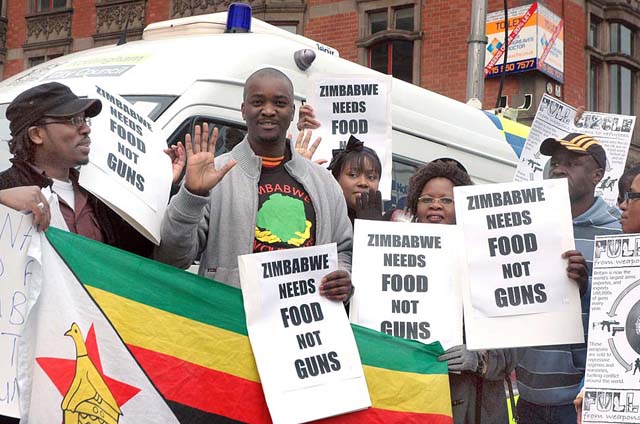 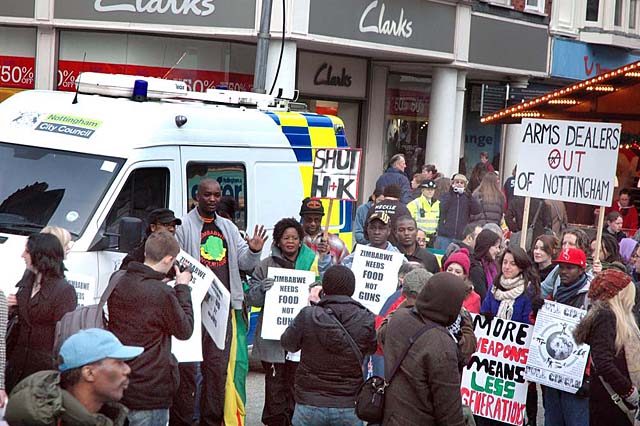 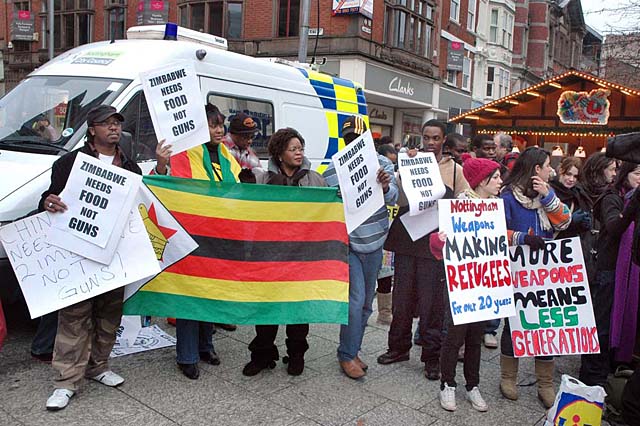 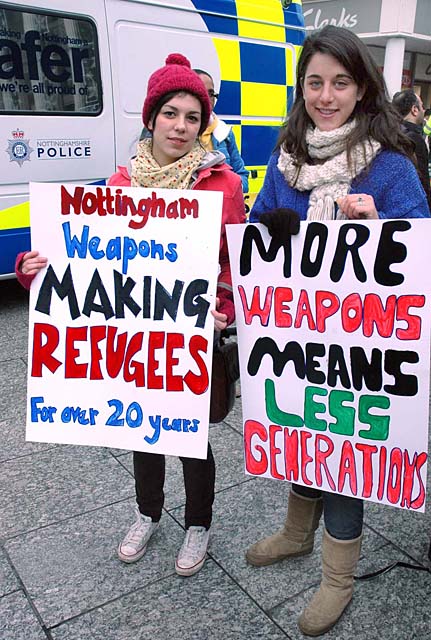 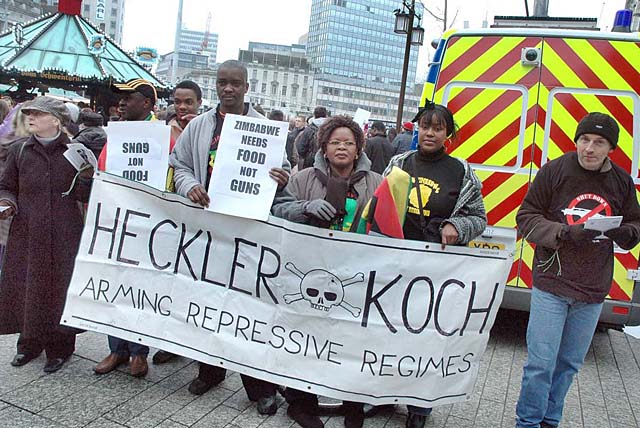 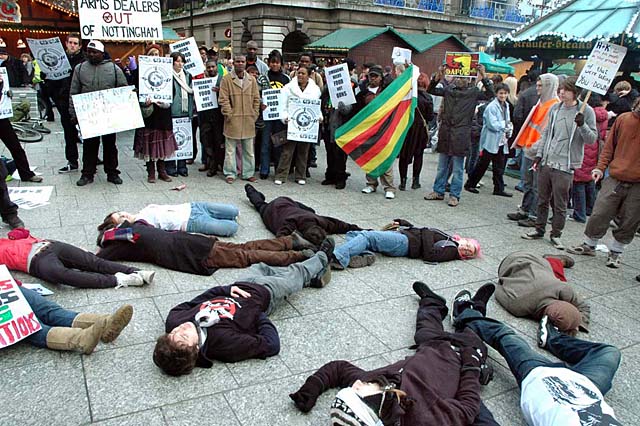 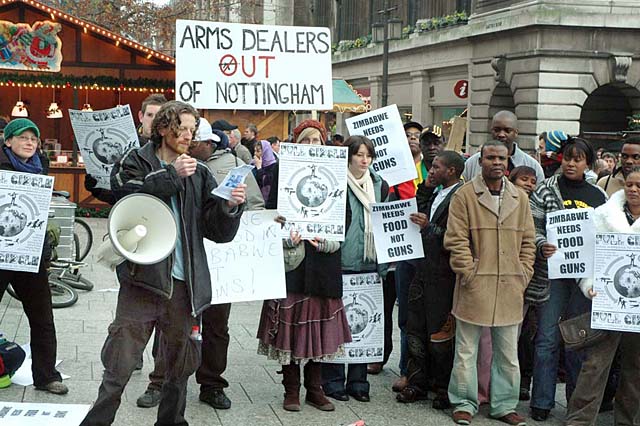 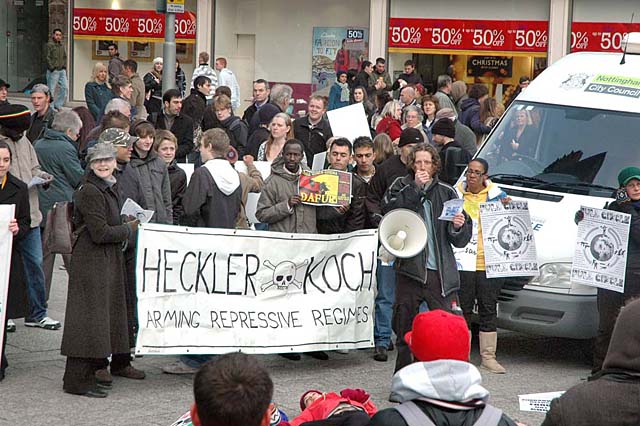 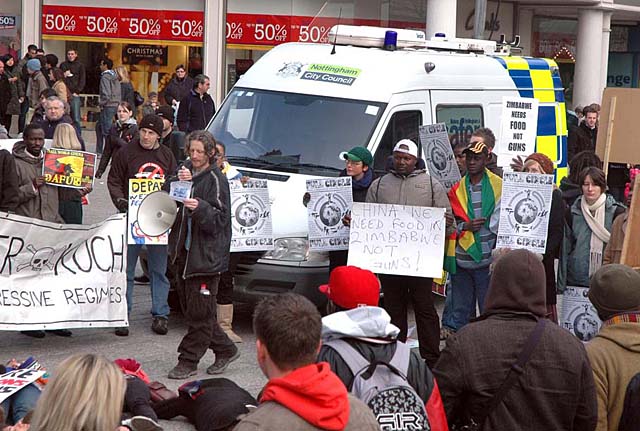 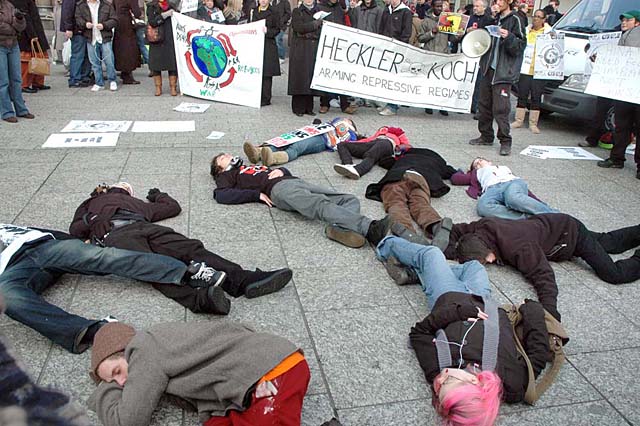 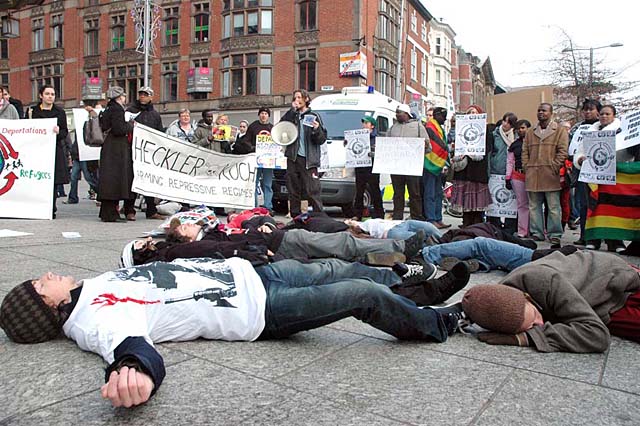 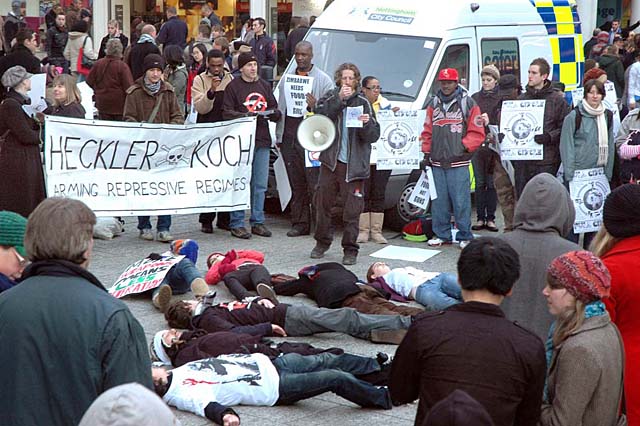 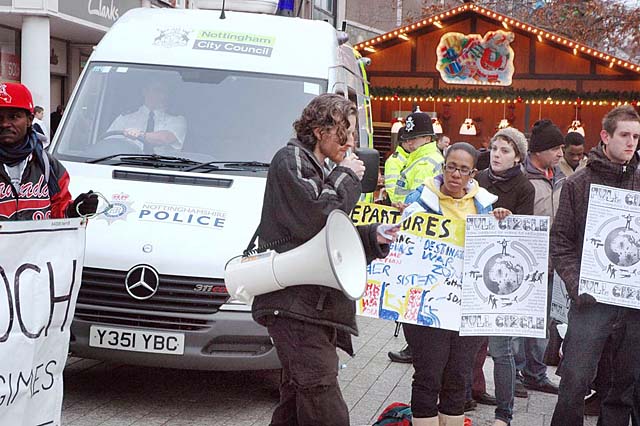 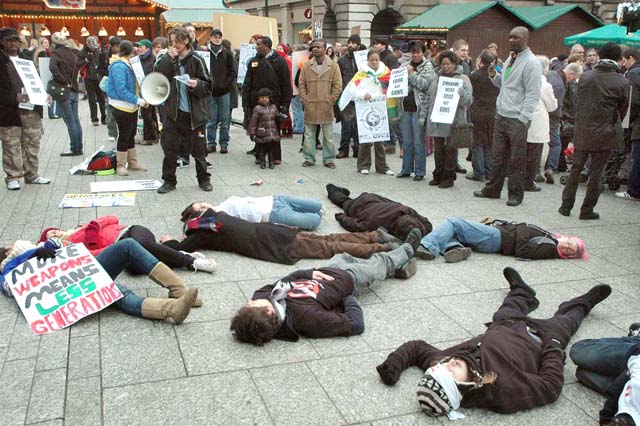 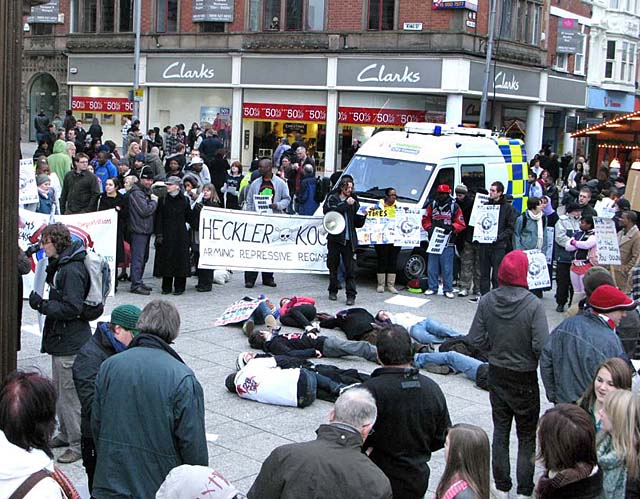 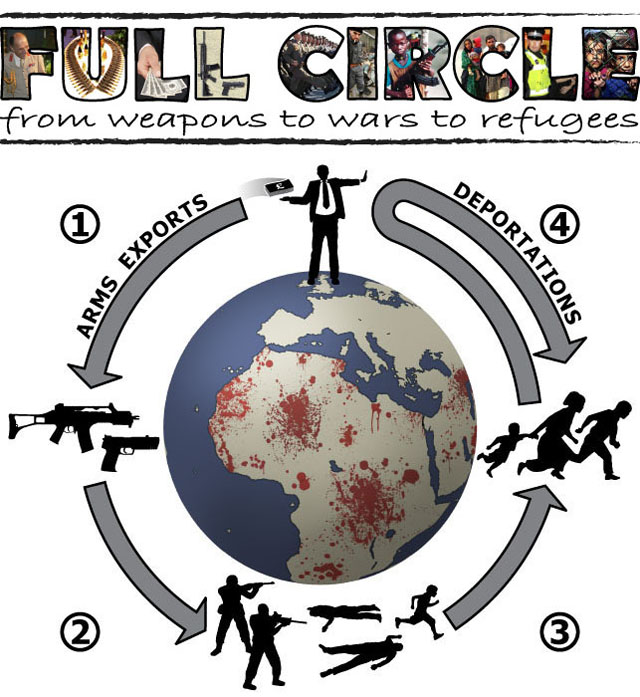 To highlight the link between the arms trade and refugees, Shut Down H&K and No Borders Nottingham held a demonstration on Saturday 29th November at 12:30 on Old Market Square in Nottingham called "FULL CIRCLE – from weapons to wars to refugees".

The police turned out [as you would expect, to make sure no-one got into any trouble]. There was also a police presence outside of the Armed Forces Recruitment Offices Nr. the Victoria Centre in Milton Street. Well this demo was about related matters to when, the last time, it got painted and decorated!

The new super-improved and shiny new CCTV van was also there, monitoring the situation, [and the Xmas shoppers]. I was amused that those demonstrating, then arranged themselves around the vehicle and used it as a 'backdrop' for their actions :-) The camera devices on the extending pole, were then trained down at such an acute angle to see those below, that I imagine the operator inside would have ended up with 'plan views' of the tops of people heads and hats. Not so good for the digital recording and data-basing and face recognition systems etc. A little while latter, they moved it. There was also the usual police EG surveillance operation, additionally with PC1818 a South Yorkshire officer attached to the FIT teams, who hung about in Nottingham having also photographed the E-on protest in Nottingham yesterday.


Shut down Heckler & Koch! Freedom of movement and the right to remain for all! No guns, no borders!

In response the campaigners pointed out to the radio station that H&K's address was published at Company House, as well as in several business directories. About the radio station being leaned on, the campaigners said that "If the security policy of H&K and Notts police relies on no-one finding out the company's location, then clearly it is they who are irresponsible, not our campaign and not the media. A large warehouse stocked with high-power assault rifles and submachine guns with inadequate security to prevent a robbery is clearly a significant danger to the public, and publicising such a danger is very much in the public interest."

This lot still remain shy of folks knowing of their activities. In my opinion, lights need to be shone into dark corners. I believe it one of the reason why the protest has been bought to the public gaze of the Market Square. The campaign has complained at the lack of press coverage it has attracted, while remaining at the Lenton Lane Industrial Estate.

There is an obvious link between the arms trade and refugees. According to the UN Refugee Agency, “armed conflict is now the driving force behind most refugee flows,” and the most devastating weapons are small arms such as rifles and machine guns.

Demos to support Amdani Juma, activist, at risk of deportation 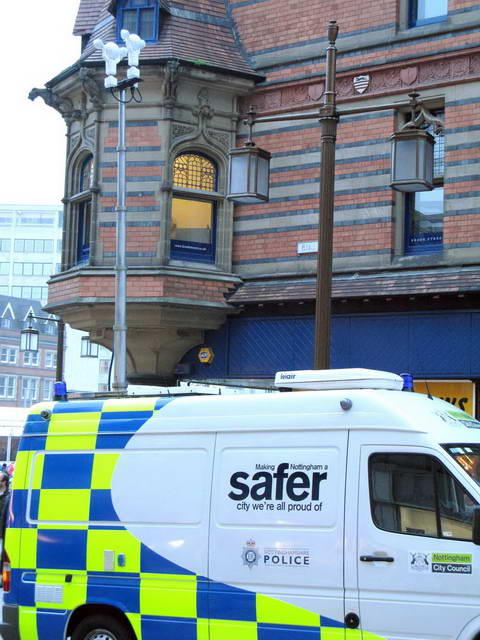 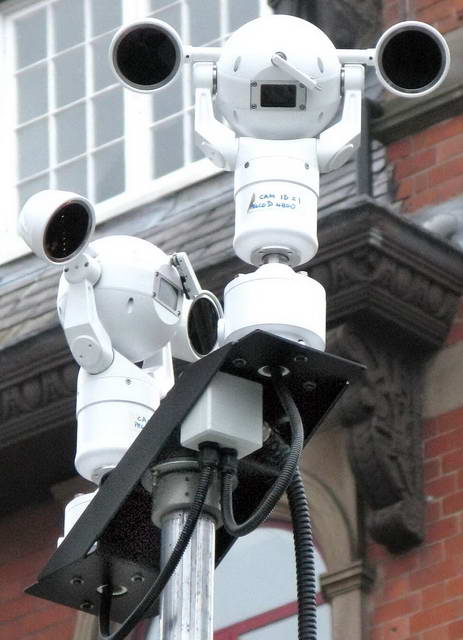 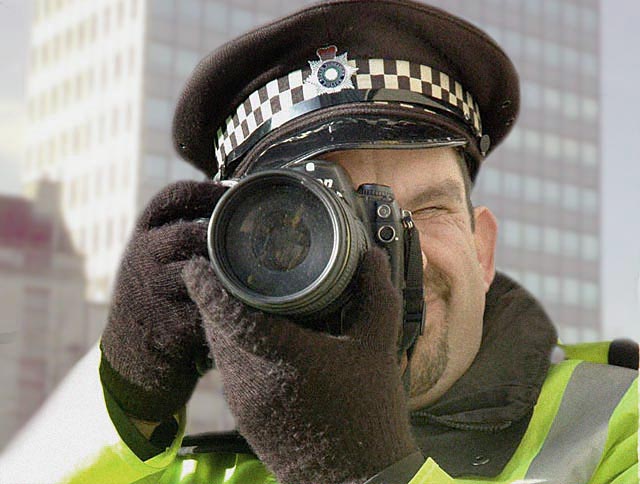 The new super-improved and shiny new CCTV van was also there, monitoring the situation,
There was also the usual police EG surveillance operation, additionally with PC1818 a South Yorkshire officer attached to the FIT teams in attendance, who hung about in Nottingham having also photographed the E-on protest in Nottingham yesterday.