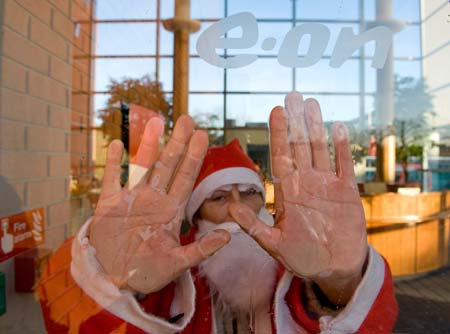 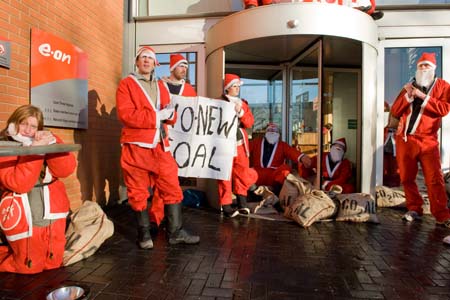 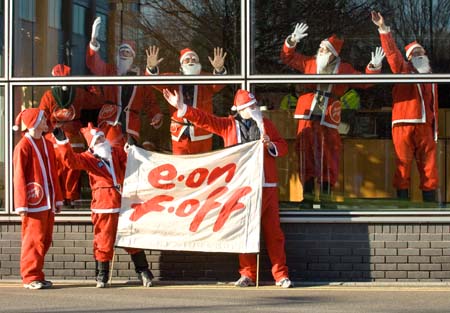 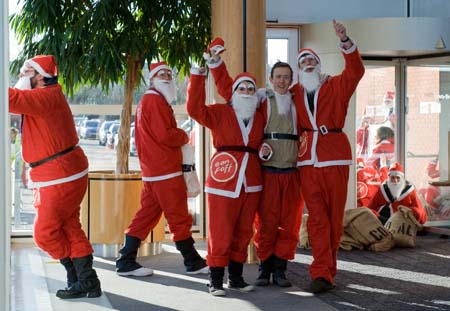 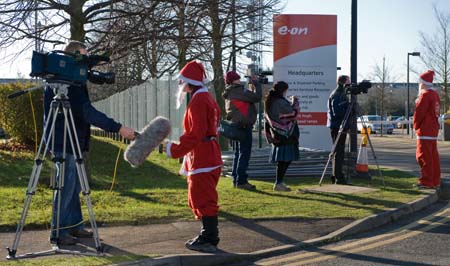 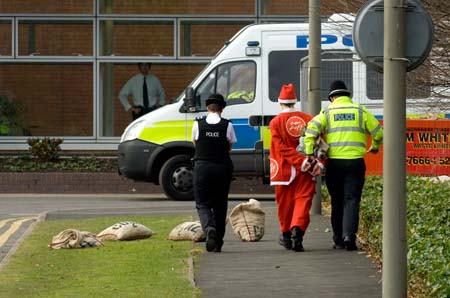 Shortly after 9am two mini buses packed with Santas arrived outside their headquarters and a score of festive protesters armed with sacks of coal poured in to the building.

For a good half hour they toured the offices, really scoring a bullseye when they inadvertently crashed the boardroom where a full scale meeting was in progress. Even after security managed to clear the upper floors the huge reception area was occupied until well into the afternoon.

Outside security goons and police created a cordon and refused entry to dozens of visitors. Clearly a good number of meetings were postponed as a result.

The mood soured slightly towards the end and extra grumpy police were summoned to kill the festive spirit. After some jostling the spectre of Scrooge emerged and four were arrested, charges not known.

Also check out the BBC website for the news piece they broadcast on the day and the BBC Radio 4 World At One in depth piece on the climate change bill featuring the office occupation and an interview with a climate camper.

Plus, more photos and reports:

And don't forget the climate camp website and the E.on F.off site:

Full Support To all the Santa's & their Helpers

It gives me hope and makes me smile to read of this great action. I make that at least 3 actions that I've heard of against E-ons head offices in Coventry in the past 3 weeks. Please kep em coming & keep up the pressure!!!

hillarious- this action apparently had hardly any imapct at all but obviously it makes these feel 'big' to think it did, let people get on with their jobs - suggest these idiots get one
note- eon has many sites and thousands of employees- disrupting a meeting -wow!

well done! brought a smile to our faces. apparently it wasnt the naughty boys they used to give the coal to. it was the poor ones..
x

If Santa is so interested in the Environment, why did he dump his costume by the roadside ?

As a santa I would like to say that once my comrades started getting arrested while attempting to leave being a santa didnt seem like such a great idea anymore. Even the most eco-conscious festive symbol would be doing well if they where prepared to risk arrest just so they could recycle there clothes.

I think a couple more items for the street cleaners to pick up is porbably outweighted by the TV coverage and radio interviews.

Watch out, the evil e.on trolls are lurking around Indymedia to jump on anti-e.on posts with their snide remarks. It may seem funny down the pub larking about with your fellow climate abusers, but people here are a bit more sophisticated in their critiques - probably because they are not so dim as to blindly believe everything they read from companies paid to dress up the unpalatable in nice fluffy terms in corporate brochures.

Seems to be that the PR people that e.on are employing are attempting to do a better job than the security guards from Initial Rentokil. Though, given how much e.on's brand is getting dragged through the mud, a few sarcastic comments on Indymedia is hardly going to cut it, boys and girls - if anything, it shows just how rattled you have been by the demos. Your actions speak louder than your words.

If climate change is causing suffering and death, then building coal fired power stations is not better than building weapons or internment camps. Not so much a moral hazard as a deep pit.

To be fair, the Santas did disrupt our head office - we had to do a total lock-down on the building for four hours and senior management had to cancel a string of meetings to work out what to do.

When I went on telly to talk about it I looked fairly pissed off and wrong-footed, and I wasn't even wearing a fake beard.

Now I'm so completely without a plan for withstanding the looming brand assault from the E.ON Face Off that all I can think of doing is posting comments on Indymedia saying that Climate Campers don't care about the environment.

It would be so much easier to do PR for this company if we didn't want to burn millions and millions more tonnes of coal.

Seems the complaint about littering would be better addressed to the police. When I have time I'll post a series of photos showing a police officer assaulting a santa by the side of the road and in the process tearing the santa suit off. The officer held the torn item in their hands for a second or so before throwing it to the ground and continuing their pursuit of the fleeing ex-santa.

Having said that... what kind of an idiot compares littering with the acts of corporate climate criminals like E-on ?

There were four arrests, three sanatas and one videographer.

Of the santas, one was arrested for a suspected breach of the peace. He was remanded and held till court on Tuesday morning where they promptly changed the charged on him to sec 5 of the public order act. Without legal council he plead guilty to speed things up and was fined £75 plus costs, both of which were set aside for time already served in custody.

Another santa was arrested for Affray (Sec 3 of Public Order Act 1986) which is two or more people using or threatening unlawful violence towards another with conduct that would cause a person of reasonable firmness present at the scene to fear for his personal safety. The placing of a piece of coal on somebodies desk along with saying that the CEO of EON had been a 'naughty boy' was apparently enough for the officer to suspect Affray although the act specifies that the conduct can not be based on words alone. After an interview and on advice from the duty solicitor (why????) this santa accepted a fixed penalty ticket for the lesser offense of Sec 5 of the Public order Act. (ie. using threatening, abusive or insulting words or behaviour, or disorderly behaviour, within the hearing or sight of a person likely to be caused harassment, alarm or distress thereby).

The third santa was arrested, charged and bailed for alleged criminal damage... the glue residue left on the glass of the front doors to the E-on reception area.

The four person arrested was a camera person arrested under aggravated trespass (section 68, 1994 CJA) allegedly committed four hours earlier when filming the santa who had entered the building to deliver their coal to the CEO. Unsurprisingly, he was not charged but bailed to return and the digital footage from the cameras retained as evidence.

Cops tear off clothes and leave them in the bushes 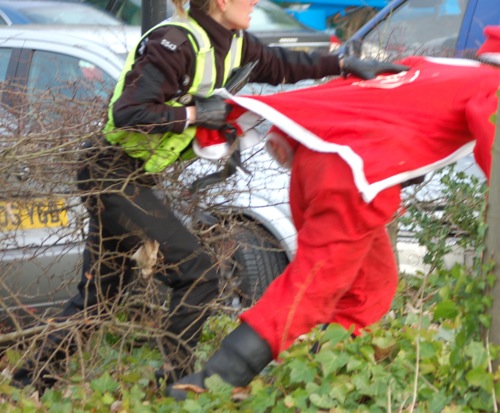 "got ya you hairy rouge!" 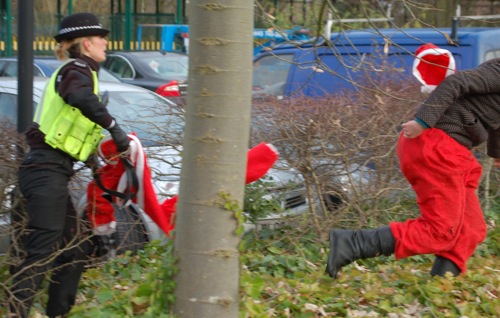 "not this time you naughty little girl!"