Protest marred the trial of Hyrbyair Marri and Faiz Baloch in London. The two have tried to organize the Baluch resistance against Pakistan military atrocities in Baluchistan, that includeds killing, rape, torture and disappearances. 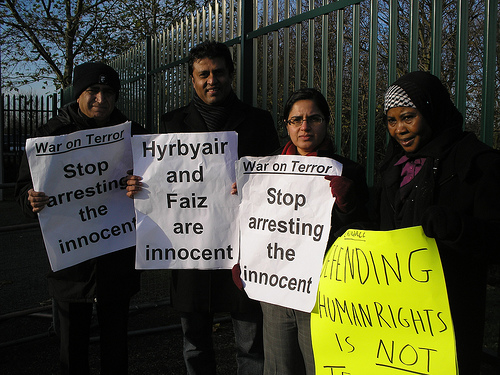 Protesters at the Woolwich Court on Monday.

LONDON, U.K.: As the Baloch 'terrorism' trial resumed in London friends and supporters of the defendants, Hyrbyair Marri and Faiz Baluch, staged a protest outside the court, calling for the trial to be halted and the charges dropped.

Marri is a younger brother of Nawabzada Bala'ach Marri, member of the Baluchistan state assembly, who was assassinated by the Pakistan army on November 20 last year. Prior to Marri's death, one of the most popular politicians former governor and chief minister Nawab Akbar Khan Bugti was killed by the Pakistan army on August 26, 2006. The two were among tens of thousands of Baluch people killed in Baluchistan in their sporadic movements to drive out Pakistan's nuclear armed army from their territory.

Ghulam Hussain Baloch, an activist of the Baluch Human Rights Council -- one of the most potent voices of the Baluch Diaspora worldwide --, said the Baluch gathered at the Woolwich Crown Court premises to show solidarity with the under-trial.

"The court is at the southern most tip of London, but a sizable number did get there," Baloch said.

Baloch said the hearing was meant for selecting a jury and a verdict is expected in February.

Although the police and court officials were needlessly bullying, forcing the protesters to leave the court grounds, the supporters of the defendants made their point and were seen by court staff and by everyone who came to the court and who passed by it.

The Balochistan human rights crusaders Hyrbyair Marri and Faiz Baluch are being prosecuted on terrorism charges, which are widely believed to have been concocted by Pakistani intelligence.

Monday's protest was supported by Baloch and Sindhi rights campaigners from Pakistan and by members of CAMPACC, the UK Campaign Against Criminalising Communities, which opposes abuses of the anti-terro laws.

Mr Marri is a former MP and government minister in the regional assembly of Balochistan - a previously independent state, which was invaded and annexed by Pakistan in 1948, and which has ever since been under illegal Pakistani military occupation. Mr Baluch is his campaign assistant.

"The Pakistan High Commissioner, speaking on behalf of the new democratic government of Pakistan, says his government wants reconciliation in Baluchistan and opposes the prosecution, effectively calling for the charges to be dropped," says human rights campaigner Peter Tatchell, who helped coordinate Monday's protest.

"Previously, the acting Interior Minister of Pakistan, Rehman Malik, announced that terror charges against Mr Marri in Pakistan have been cancelled; stating that the case against him had been politically motivated by the Musharraf dictatorship. This discredits the whole basis on which Marri and Baluch have been charged in London.

"The trial is another abuse of the anti-terror laws, whereby legitimate human rights campaigners end up on trial.

"It appears that the UK government has been blackmailed into arresting these men and harassing other Baloch exiles and refugees. It is reported that Pakistan's military and intelligence services have threatened to end all cooperation with the UK government in the "war on terror" unless critics of its war in Balochistan are silenced and jailed. That is probably why Marri and Baluch are on trial.

"The UK authorities seem to have decided these men are expendable for the sake of the 'greater good' of tackling terrorism by maintaining close relations with the Pakistani military and intelligence services.

"Marri and Baluch have campaigned for self-determination for Balochistan and helped expose Pakistan's annexation and oppression of the Baloch nation. They are defending their people against military oppression and economic exploitation. Pakistani military chiefs want them prosecuted because they have been such effective campaigners, exposing to the world Islamabad's tyranny in Balochistan.

"For nine years, the UK's Labour government aided and abetted the illegal dictatorship of Pervez Musharraf, selling him military equipment that was used to prosecute Pakistan's illegal war in Balochistan - a war that has involved the perpetration of war crimes and crimes against humanity and which has been strongly condemned by international human rights groups," said Mr Tatchell.

According to British news reports charges against Hyrbyair Marri and Faiz Baloch were primarily brought up as a trade-off beteen London and Islamabad to have Rashid Rauf arrested in Pakistan. Rauf was suspected of involvement in an aborted Transatlantic Aircraft Plot to blow up airplanes midair when they are flying from the Europe to U.S. Rauf was married to a relative of Maulana Masood Azhar, founder of the extremist Jaish-e-Mohammed or 'Army of Mohammed.'

Some planted Press reports said Rauf was allegedly killed in a U.S. attack in Pakistan's Federally Administered Tribal Areas on November 22, but his family said he is alive. He had earlier mysteriously escaped from a Pakistani jail on December 14 last year, while handcuffed.

Rauf has dual nationality, Pakistani and British. "Some 800,000 strong, many with Kashmiri roots, the British Pakistani community is an attractive target for many reasons not the least the fact that second and third generation members have British passports and can thus travel more easily in the West," says Bruce Riedel, a senior fellow at Brookings Instituion and advisor to President-elect Barack Obama on Pakistan.

Photos of the London protests are available to view and download: