Over fifty young protesters from the climate action group Plane Stupid have this morning shut down Stansted Airport by camping on the runway and surrounding themselves with fortified security fencing.

The peaceful protest began at 3.15am this morning (Monday) whilst the runway was temporarily closed for maintenance work. Plane Stupid aims to prevent the scheduled reopening of the runway at 5am. The group intends to maintain its blockade for as long as possible, preventing the release of thousands of tonnes of greenhouse gas emissions into the atmosphere. 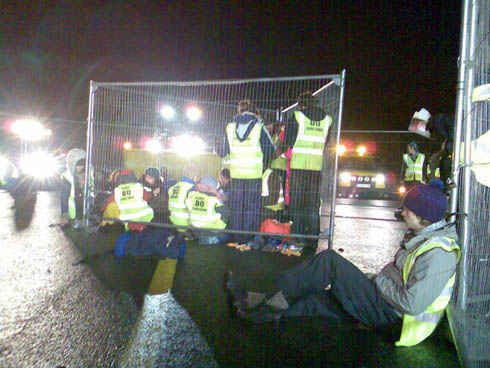 10:20am update: The Press Association reports that 57 people have been arrested, and 56 Ryanair flights cancelled.

8:10am update: At least 39 people have been arrested and the runway
re-opened. BAA are claiming that 21 flights have been cancelled. Every
minute the airport emits around 4 tonnes of CO2.

6:00am update: BAA have confirmed that the first flights out of the airport have been delayed. The average flight out of Stansted has a climate impact equivalent to 41.58 tonnes of CO2.

"We're here because our parents' generation has failed us and its now down to young people to stop climate change by whatever peaceful means we have left. We're afraid of what the police might do to us, we're afraid of going to jail but nothing scares us as much as the threat of runaway climate change. We've thought through the consequences of what we're doing here but we're determined to stop as many tonnes of CO2 as we can."

The young campaigners have raised a banner reading 'CLIMATE EMERGENCY'. Wearing high visibility vests which have the message "Please DO something" printed on them, they chose this day for the peaceful trespass as they knew the runway was closed for maintenance works and no flights were due to take off or land for two hours after they arrived.

"We all grew up listening to Blair and Brown talking about the urgent need to slash emissions, but nothing ever happened. Even now politicians from our parents' generation are in Poland holding talks about talks, but still nobody's actually doing anything. The scientists tell us we've got about seven years to make emissions peak then drop, and if we fail it will be the people on this runway, and our children, who'll live with the consequences. That's why I'm doing this."

The campaigners chose to close Stansted after the government approved the expansion of capacity at the airport by ten million passengers a year. Aviation is Britain's fastest growing source of emissions, already amounting to at least 13% of our country's climate impact. With plans for new runways across the UK, including at Heathrow and Stansted, experts from the Tyndall Centre for climate research say Labour's aviation policy alone will scupper any chance the UK has of hitting its climate targets.

"We fully appreciate the scale of what we've done here today and we know many people will struggle to understand why we've done it, but the Arctic ice cap is disappearing, the seas are rising and our last chance to save our future is vanishing. With people taking more flights in Britain than anywhere else on earth, we have a unique responsibility to tackle emissions from flying."

Nice one people, the current government is in the pocket of BAA amongst others and care little for the environment unless brown is reading his lines in front of the BBC, lying to the British public as per usual to retain votes but would the conservatives have been any different. The puppets on the left say yes, as do the puppets on the right.


who does the government answer to?

fta: If you want to know which companies to boycott in regards of climate change Future Heathrow, the lobby group pushing for a third runway, have just published an interesting list of companies supporting them.

London Chamber of Commerce and Industry

Scottish Council for Development and Industry

member of the public