Angered by the rejection of the sacked migrants appeal, one of the workers and people from oxford, bristol and south wales no borders made a right racket outside Amey's Oxford HQ.

In September 2008 five Colombian cleaners working for Amey Plc at the
National Physical Laboratory were suspended for daring to criticise Amey
for putting an excessive workload onto ever fewer staff, for
unilaterally changing terms and conditions and for disrespecting
grievance procedures. The five have since been sacked.

About 20 people made a horrible noise with drums, olive oil tins, a symbol and two megaphones. the megaphones were particularly effective - especially the siren function, and we got some proper nasty feedback when we placed one next to the other.

Dialogue was not forthcoming from within the glass and steel building , but we did hear from one of the sacked workers first hand: he thanked us for supporting him and his fellow workers, but it was there fighting spirit which inspired us all to be there.

Amey, NPL and the Struggle for Workers Rights

In September 2008 five Colombian cleaners working for Amey Plc at the
National Physical Laboratory were suspended for daring to criticise Amey
for putting an excessive workload onto ever fewer staff, for
unilaterally changing terms and conditions and for disrespecting
grievance procedures. The five have since been sacked.

They are all members of the Prospect union and some of Unite-T&G as well. When Amey took over the contract in December 2006 it found itself faced with a largely Latin American migrant workforce that was organised and conscious of its rights. They had recently unionised and were taking steps to gain recognition - a right afforded to all other staff at the NPL.

In order to enforce a serious increase in workload and downgrade in conditions, Amey tricked the cleaners into attending a fake training session, only for the doors to be bolted and 7 of the workers to be taken away by the police. Of these, three were deported - one to Colombia and two to Brazil. All lost their jobs.

These workers were never replaced, and there are now 10 cleaners doing the work previously done by 36! The sacking of the five workers is a direct result of the remaining workers' attempts to protest against
this trend. Amey say that they were fired for bringing the company into
disrepute - that is, handing out a leaflet to other NPL staff stating what was happening.

Considering these workers had tried to move grievances which were never listened to, what Amey is actually saying is: these workers were sacked for taking the only course of action available to them, or to anyone whose rights are not recognised by their employers.

But this small story is a perfect lesson in how migration controls work, and what role they play in the economy. It's clear that, in order to take the contract at NPL, Amey had to make a bid stating that it could do the same work as the previous company for less money. This "race to the bottom" is the way the market works.

But how can a company do the same work for less? By keeping wages down, enforcing a bigger workload on less workers, using agency workers (mostly hired as "self-employed" "one-person companies") that have no rights and aren't given the appropriate training. How can they get away with this?

By counting on a workforce that is not aware of its labour rights, who has less options in the work market, or is too precarious or afraid to challenge their conditions. In other words, the migrant worker who has little or no support network in this country, and whose visa status can often be irregular, is the ideal worker for companies like Amey: the guarantee that they can keep on racing to the bottom.

It is by exploiting their precariousness that Amey can make its £75 million net annual profit.And what if they find organised workers who won't accept such exploitation? That's when immigration controls come in handy: to punish or threaten with deportation and sacking; to replace them with others who won't "cause any problems". Why won't they cause any problems? Often because they are irregular themselves - but their visa status is not a problem, unless they demand their rights.

Amey knows this game very well. It is a majority shareholder in Tubelines, which cleans parts of the Underground. Tube cleaners who dared to strike for a living wage this summer were faced with a corporate response consisting paper checks, immigration raids and deportations to safe, prosperous countries like Sierra Leone and the Congo. Once these retaliations take place, the cleaning companies can just hire a whole new batch of migrant workers - or, like at the NPL, take advantage of this situation and just get a small amount of people to do what used to be done by many more. But the game is the same across the building management, cleaning and security industries. Companies in this sector - often multinationals themselves - are often in the same situation as Amey: cleaning services at NPL, shareholder in the site management of the London Underground... and making profits off the back of migrant workers everywhere! Serco, the company that does the site management at NPL, can also be found at migrant detention centres like Harmondsworth and Colnbrook in London, where they provide site management and security services.

It's not much of a stretch to imagine that, while profiting from the misery of detainees and deportees, they also hire irregular migrants elsewhere!This is ultimately more than just a matter of rights and fair treatment for migrant workers - it's about the "race to the bottom" that determines deregulation, worse pay and standards for all workers in the UK. There is only one solution to this problem: to regularise all migrant workers whose work produces millions for companies like Amey and Serco; to stop the use of raids and fear that keeps pushing down the conditions of migrant workers, but ultimately of all of

Mel Ewell, Chief Executive of Amey plc arrived at Kingston University on 2 December to be awarded a place on the Wall of Fame, a university honour for twenty selected famous graduates.

More than twenty protestors entered the offices of Amey Plc in High Holborn on Friday in protest at the sacking of five Colombian cleaners and the rejection of their appeal. The protesters entered the office building to give a petition letter to an Amey representative but were blocked by security in the lobby and were told Amey did not want to see them. After the occupation Julio, one of the sacked cleaners, stayed behind to give the letter but Amey still refused to see him.

demo in support of sacked AMEY workers in newcastle

Activists from no borders north east did a demo in solidarity with the sacked AMEY workers outside the AMEY offices in newcastle. Over 100 leaflets were given out to passers by and staff entering the building for work.

Pictures from the demo @ Amey HQ 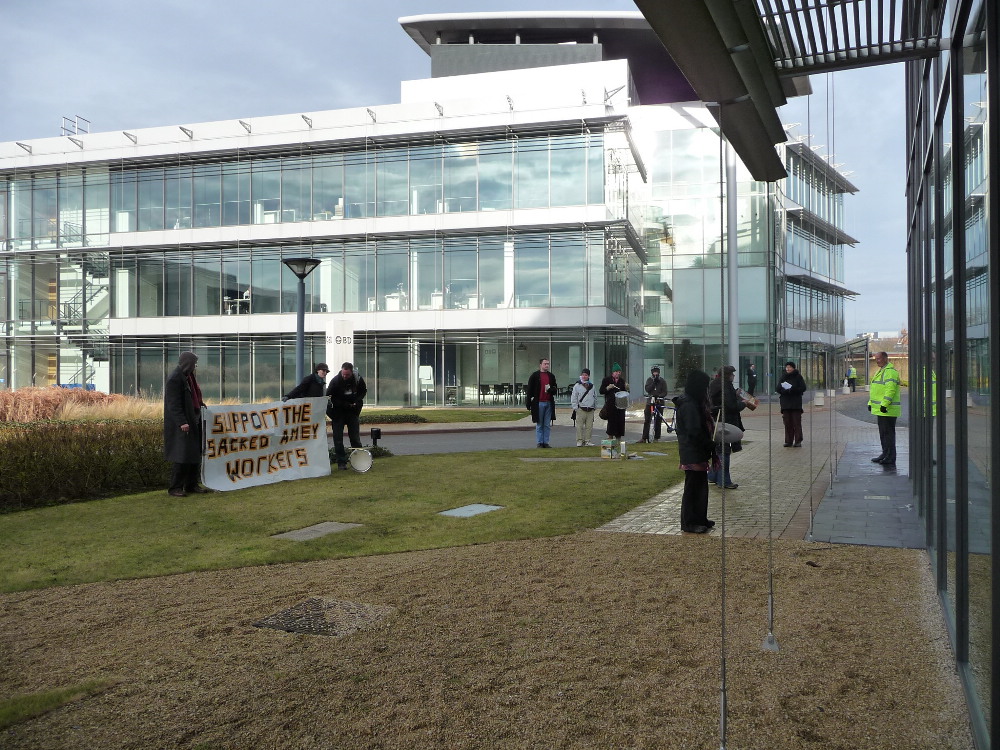 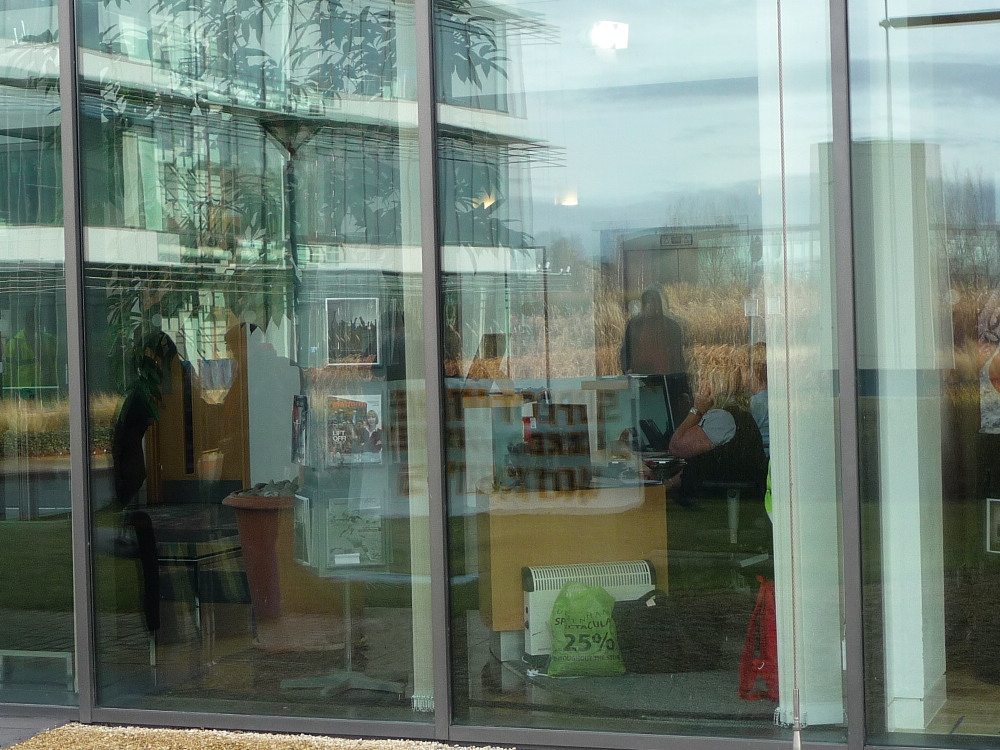 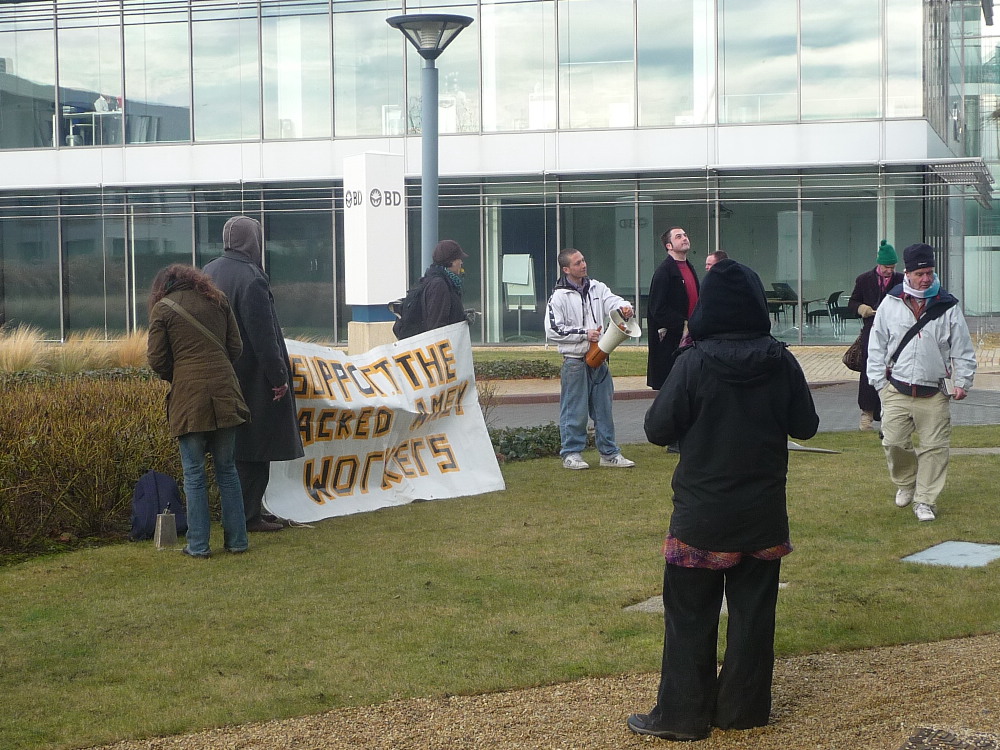 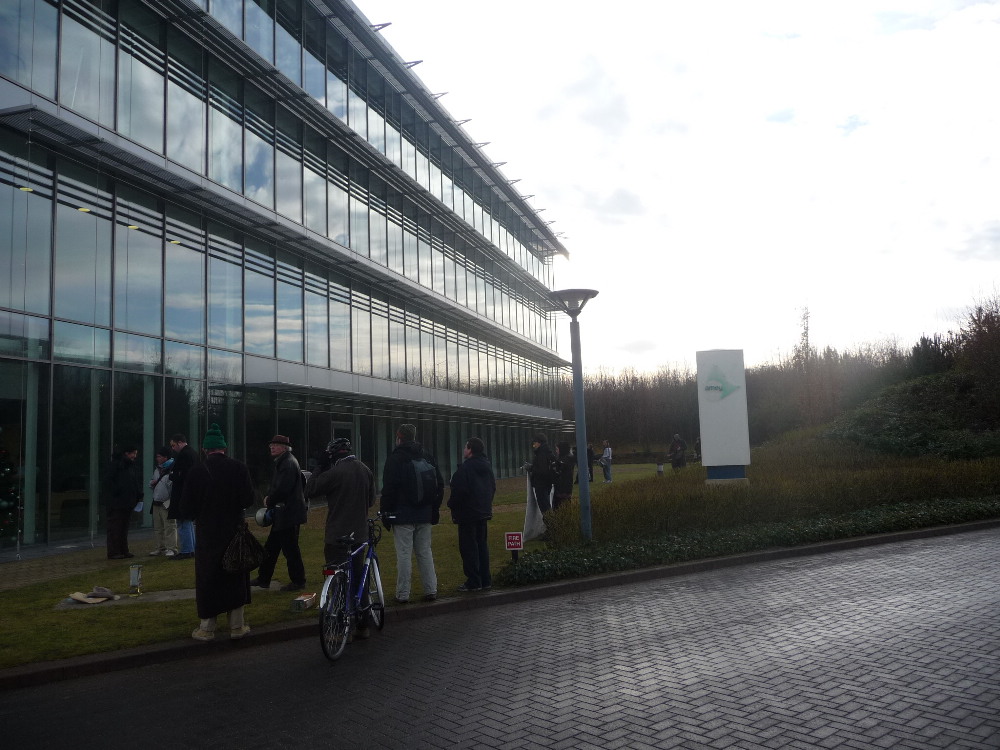 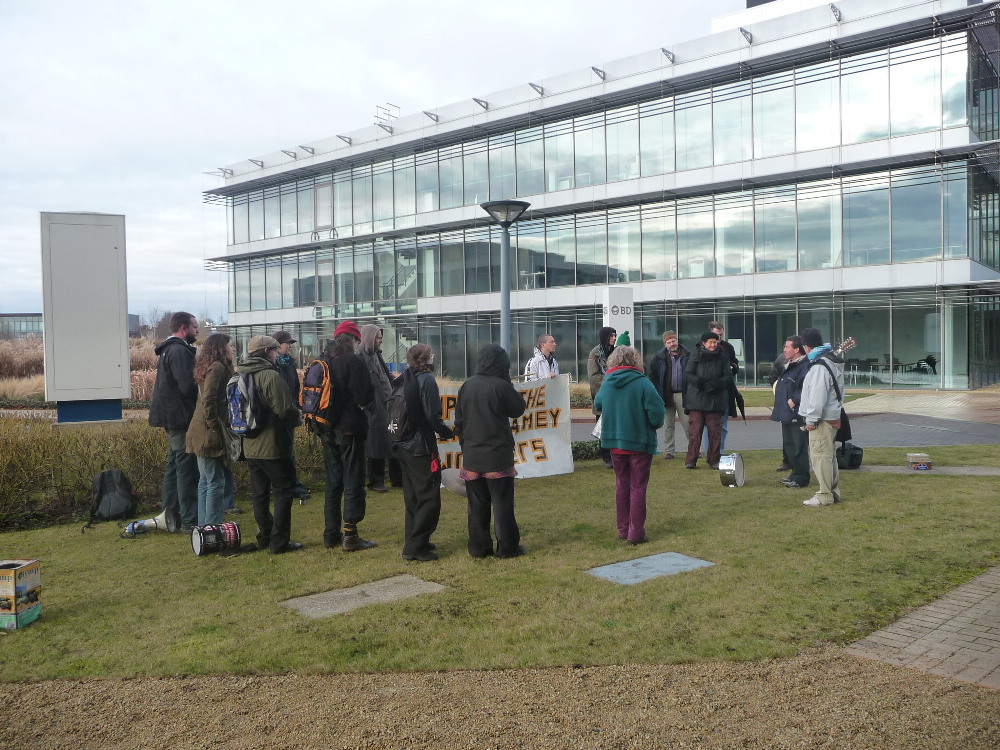 Talking with one of the sacked Amey workers

video can also be found at: