Greece, Thessaloniki: Communique from the Ocupied School of Theatre

Alexandros was our friend, our brother, our son, our classmate and our comrade.*** please repost it to other indymedias ***
15 years old boy is murdered

Alexandros was our friend, our brother, our son, our classmate and our comrade.The murder of the 15 years old Alexandros was the last straw for all the cases of young peoples' murders either for talking back to the cops, or for not stoppingin a roadblock, or even for being in the wrong place the wrong moment -as Alexandros did.
The murder of the 15 years old Alexandros was not an isolated incident, as the home Secretary stated with audacity. His statement completes practically the announcement of the former minister of Justice (Polydoras) that is a matter of time until a policeman will loose his temper and will shoot. But all the elements and all the witnesses indicate and forces us to think that a single verbal attack may be enough for a cop to loose his temper and shoot.
The murder of young serbian student Bulatovic in 1998 in thessaloniki by a cop, the murder of young Leontidis  by a cop at Cassandrou street in 2003, the death of 24 years old Tony Onohua after being chased by civil cops at the area of Kalamaria  the summer of 2007, the murder of 45 years old Maria in Lefkimi after the attack of police agaist the people who were struggling against the waste disposal facility, the murder of the pakistan migrant at Petrou Ralli street in Athens the last month, the every day humiliation and violence against each petty transgressors at police precincts all over Greece, shooting against the participants of university students' demonstrations the last year, the violent supreccion of demonstrations, the police's teared gas fueled war, the violence against anyone protesting [..] And, of course, the every day murders of economical and political immigrants by the border patrols. Even the deaths in the freezing agean waters, or the minefields in Evros: all these paint the picture of the greek police.
The murder of the 15yr old alexandros caused a wave of anger and despair from hundreds of thousands youth and citizens of any age. It's not just the disgust and the griefing at the death of a young man. It's the common consience that we all share as brothers, friends and parents, that there is a bullet with our or our beloved's name on it waiting for the ill-fated rendezvouz. We live in a social reality where that rewards the worthless crooks that manipulate us, politicians and involved clergy. Where we all try to survive in a tommorow without a future.
We handed the future and the managment of our society to people without morale nor rules, without respect for mankingd.
In such a reality the murder of the 15yr old alexandros was the last straw that that overfilled our rage.
But rage isn't just an emotion. It is a fight for social justice. A justice that is evident now that as long as it's absent from the social reality there will be no social peace, because with such submission and such social inequality only graveyards can claim social peace.
Just because we are young like alexandros, just because we want to dream with dignity where the state and the authorities seed submission and despair. Because we want to live and not just get by this winter, we are enraged and fight for all these.
So we may not forget Alexandros nor have another dead alexandros from a cops bullet.
So no peace  with those that destroy the future of youths, no intervention, no crocodile tears for the hypocritical ministers. Love for life, hope for people. A daily social fight with our classmates, our friends, our families and our comrades for a societas civilorum without guardians for a society of solidarty.
We call every citizen, every student and worker to march with us against the goverment-backed assassins.
We call the schoolmates of alexandros in Thessaloniki to honor the memory of their peer and to abstain from the schools at Tuesday, the day of Alexandros' funeral.
Demonstration at Aristelous on Tuesday 10th of December, the day of the funeral.Thessaloniki 6/12/08
Assembly of the Occupied School of Theater.

PS: the schools are closed all over greece since 8/12. The prisoners of Diavata Prison in Thessaloniki who were on hunger strike a few weeks ago, send a message that they will stand on our side in the struggle. Today (9/12) is the funeral of Alexandros Andreas Grigoropoulos at 3pm in Athens. We wil march in the central streets of Thessaloniki at the same moment. All Greece will be on the streets. 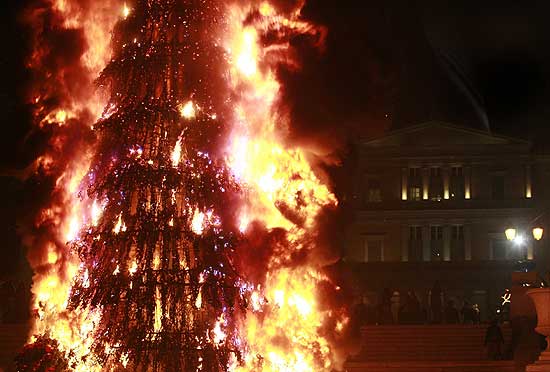 A communication from the occupied polytechnic university of Athens.

On Saturday December 6, 2008, Alexandros Grigoropoulos, a 15-year old comrade, was murdered in cold blood, with a bullet in the chest by a cop in the area of Exarchia.

Contrary to the statements of politicians and journalists who are accomplices to the murder, this was not an "isolated incident", but an explosion of the state repression which systematically and in an organised manner targets those who resist, those who revolt, the anarchists and antiauthoritarians.  It is the peak of state terrorism which is expressed with the upgrading of the role of repressive mechanisms, their continuous armament, the increasing levels of violence they use, with the doctrine of "zero tolerance", with the slandering media propaganda that criminalises those who are fighting against authority. It is these conditions that prepare the ground for the intensification of repression, attempting to extract social consent beforehand, and arming the weapons of state murderers in uniform! Lethal violence against the people in the social and class struggle is aiming at everybody's submission, serving as exemplary punishment, meant to spread fear.

It is part of the wider attack of the state and the bosses against the entire society, in order to impose more rigid conditions of exploitation and oppression, to consolidate control and repression. From school and universities to the dungeons of waged slavery with the hundreds of dead workers in the so-called "working accidents" and the poverty embracing large numbers of the population… From the minefields in the borders, the pogroms and the murders of immigrants and refugees to the numerous "suicides" in prisons and police stations… from the "accindental shootings" in police blockades to violent repression of local resistances, Democracy is showing its teeth!

From the first moment after the murder of Alexandros, spontaneous demonstrations and riots burst in the center of Athens, the Polytechnic, the Economic and the Law Schools are being occupied and attacks against state and capitalist targets take place in many different neighborhoods and in the city centre. Demonstrations, attacks and clashes erupt in Thessaloniki, Patras, Volos, Chania and Heraklion in Crete, in Giannena, Komotini and many more cities. In Athens, in Patission street –outside the Polytechnic and the Economic School- clashes last all night. Outside the Polytechnic the riot police make use of plastic bullets.

On Sunday the 7th December, thousands of people demonstrate towards the police headquarters in Athens, attacking the riot police. Clashes of unprecedented tension spread in the streets of the city centre, lasting until late at night. Many demonstrators are injured and a number of them are arrested.

We continue the occupation of the Polytechnic School which started on Saturday night, creating a space for all people who fighting to gather, and one more permanent focus of resistance in the city.

In the barricades, the university occupations, the demonstrations and the assemblies we keep alive the memory of Alexandros, but also the memory of Michalis Kaltezas and of all the comrades who were murdered by the state, strengthening the struggle for a world without masters and slaves, without police, armies, prisons and borders.

The bullets of the murderers in uniform, the arrests and beatings of demonstrators, the chemical gas war launched by the police forces, not only cannot manage to impose fear and silence, but they become for the people the reason to raise against state terrorism the cries of the struggle for freedom, to abandon fear and to meet –more and more every day- in the streets of revolt. To let the rage overflow and drown them!

STATE TERRORISM SHALL NOT PASS!

IMMEDIATE RELEASE OF ALL THE ARRESTED IN THE EVENTS OF SATURDAY AND SUNDAY (7-8 DECEMBER).

We are sending our solidarity to everyone occupying universities, demonstrating and clashing with the state murderers all over the country.

By The Occupation of the Polytechnic University in Athens