to cut it short: we have enough reasons to hate the police

there are several manifestations this weekend that were all planned
before the griots and now refer on them.

in vienna/ austria there is a demonstration on friday against repression
in germany militant group (mg)/ france (tarnac)/ austria. this
demonstration inaugurates a weekend of antirepression.

in berlin/ germany there is a demo on friday night in solidarity with
the people accused for being members of mg and trying to burn military
cars. mobilisation is very large for that.

on saturday in several cities people are on the streets in solidarity
with mumia abu jamal (berlin, hamburg). there is another demonstration
in bremen on saturday (against repression, internal/ external security,
frontex).

what i consider to be very important on saturday is a demonstration in
freiburg against changing of police law/ demonstration law. as bavaria,
baden-württemberg (federal country south west of germany) tries to
implement this month a new law, that prohibits "militance" by
illegalzing to join a demonstration in black clothes (yes, true), what
is seen as an expression that you might be "in favour of violence". it
is obvious, that this new law is tried to be set up before the nato
summit in april. the german part of this summit is planned to be held in
baden-württemberg in the cities kehl and baden-baden. 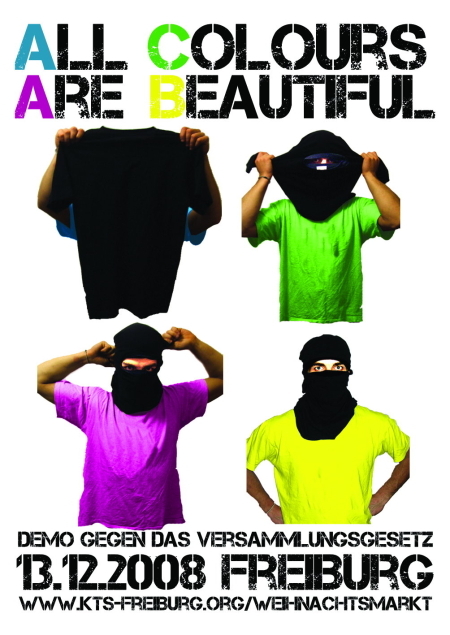 the demonstration in freiburg will be the finale of two others that
happened in mannheim (organized by antifa, large black block) and
stuttgart (organized by broad alliance, largest black block since years
in baden-württemberg). the manif in freiburg is not registered (which is
quite difficult and rare in germany) and will start inside the christmas
market. see the poster:
www.gipfelsoli.org/rcms_repos/images/58/08-12-13-Demonstration-Freiburg.jpeg
and the invitation (french):

also in france people will be on the streets cause the arrests in
tarnac, that are the tip of the iceberg what is going on in france.
there is a large wave of repression against peops considered to be part
of "anarcho-autonom" movement (as they are called by government and
police), such as resistance against detention centres CPE, protests in
vichy, freeparty-scene, anti-sarko and, sure, anti nato (see

http://infokiosques.net/mauvaises_intentions).
in germany before the g8 police needed some reasons for repression and
house raids, so they opened an investigation on "terrorism" which
expanded their competencies against dissent! massively (gps transmitter,
video surveillance, phone tapping). i guess they do the same for nato,
but together germany and france.

reports say that german police collaborates with french in tarnac case,
as both investigate direct action against electric cables of railways
with horseshoe-shaped iron bars (dont know what that is? see

http://tarnac9.noblogs.org/gallery/5188/ferfa1.jpg). this happened as
well in france as in germany before and while the castor transport
(nuclear waste train) november 8th to 10 (and before in october, which
is calmed by police).

also, there are lots of other things going on in germany that produce
anger against the police. this week 2 policemen were set free after a 2
years trial, that were responsible for oury jalloh burning in a prison
cell. a large part of migrants and their supporters fighted a lot for at
least get police sentenced claiming "oury jalloh - this was murder".

maybe this weekend might benefit from the priming in greece and push the
police back again to get more space to discuss and organize.

http://euro-police.org --> link to official
website). frontex chief will be there also.
.
in november 2009, european ministers of interior and justice meet in
stockholm to decide their new 5 years plan on inner security for EU.
they will discuss also to implement remote search of computers done by
european police/ europol, a project of german minister schäuble and
italian foreign minister frattini.

please note the invitation for the dissent meeting in january:

http://www.dissent.fr/node/61 (de | fr | es | en). and a proposal for an
actionday against internal/ external security around nato resistance:

p.s.: and don't miss the editor of "The Coming Insurrection" about the
griots:

http://www.millebabords.org/spip.php?article9768. could anybody
translate that?