On Saturday December the 6th, the Greek police committed a cold blooded murder of Alexandros Grigoropoulos, a 15 year-old boy, in the streets of Athens. Since then, and despite the states attempt to quieten the mood, thousands have taken to the streets and hundreds of police stations, banks and government buildings have been burnt down across the country. High School and university students have been leading demonstrations, clashing with the police whilst occupying campuses to organise themselves. All around Greece, in big cities and small towns, social unrest is mounting and tension with the state authorities has reawaken social consciousness. 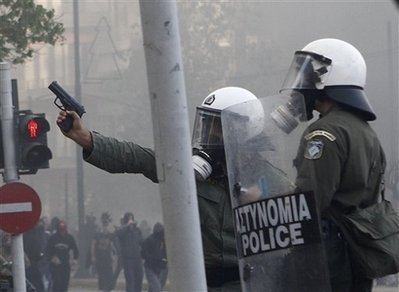 Contrary to Government and media claims, this murder is not an isolated event. A series of incidents including fatal "accidents" in working places, prisoner hunger strikes, pogroms against immigrants and refugees, tortures at police stations, and numerous economic scandals by business and the church, gave basis to the magnification of the response and the unprecedented social tension of the last few days.

The killing of young Alexandros has been the trigger. A wave of excluded, disappointed, repressed, desperate people flooded the streets, from diverse cultural backgrounds, education, experience and class and were united in a spontaneous cry of a society that is being suppressed, deprived of its future, that is watching its dreams being crushed. This is a generation that has been systematically excluded from any means of expression, deprived of any possibility to decide for itself at school, at university or at work, through its growing alienation. This generation is choosing the act of destroying as its own expression of rage and creativity. As long as there is no justice, there will be no social peace.

You may have assumed that the violence happening in the cities of Greece are anti-social or against people – they are not. They are organised attempts to enact revenge against a system that values the law of property above and beyond the needs of its citizens. A system that supports the wide-spread destruction of the natural environmental so that the rich can build their mountain top casinos and luxury mansions. For that reason, even in the chaos, the targets are the same – Banks, Luxury Shops, Car Dealerships and State buildings.
The rebellion in Greece is a reminder, that the possibility still exists to for rebellion against the state and capitalists interests, that people are far from being the “obedient workers” happily accepting their lot in life.

The youths in Greece have realised what we can only dream that our own youths in the UK will hopefully one day realise – that struggle is social, cooperative , collective and desirable. That without confronting the authority of police, politicians or boss we are left with a nightmare of an existence where those with power can do, say, act and steal without response. The apathy of ourselves brings as closer to the role of accomplice in our own exploitation and own repression.

• We express our solidarity with the thousands that have taken over the streets in Greece and our full support to their struggle.
• Unconditional release of all those imprisoned during this revolt
• Freedom begins when the state ends.

Addition: The above is the text for the solidarity demo in Dalston