At an open public meeting in Hatfield, St Modwen were hammered for what they have done to Hatfield town centre. 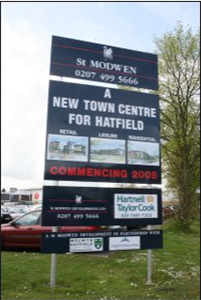 Hatfield town centre consists of boarded-up and empty retail units. It Had been trashed by St Modwen, the Developer from Hell. In May, St Modwen announced they were pulling the plug and leaving the town centre as it was, they had run out of money.

At a recent open public meeting, St Modwen was hammered for having destroyed the town centre. Those who turned up wanted to see St Modwen driven out of town.

Councillor leader John Dean told the meeting the delay was not unique to Hatfield, that it was not the only town that was suffering. He could have added, 'at the hands of St Modwen'. If he was referring to St Modwen, then he was right. Not for nothing is St Modwen known as the UK's Leading Degeneration Specialist.

St Modwen bought Farnborough town centre over a decade ago. They then laid waste to the town centre driving out many small and independent retailers. Now there is little left. Not even Christmas lights.

A year ago Farnborough looked like Hatfield, boarded-up and empty retail units. Last summer half the town centre was demolished, leaving behind an unsecured and dangerous demolition site. Men hang around, holes get dug and filled in, diggers move up and down, piles of rubble get moved back and forth, but nothing else happens.

We are told by the local comic, nothing more than a PR arm of St Modwen where the juvenile scribblers cannot tell the difference between a news story a corporate press release which they happily regurgitate as news, that there will be a happy ending, shoppers will have an exciting new shopping centre by Christmas. This is a story the local rag has been telling its dwindling band of readers for the last five years.

Meanwhile retailers have had enough. They are demanding that rents be halved and that they be given a rates holiday for the next two years. If not, many more businesses are going to pull out of Farnborough.

Walthamstow, Bognor Regis, Queen's Market, the story is the same, wanton destruction by St Modwen under the guise of regeneration.

Queen's Market was pipped at the post by Bury Market in the BBC Radio 4 Food and Farming Awards. Were St Modwen to have there way, this popular Victorian market would be destroyed.

At least at Hatfield, albeit somewhat late in the day, a public meeting has been held where St Modwen can be publicly pilloried. This has not happened elsewhere, but nevertheless where people have managed to have their say, St Modwen has been rejected.

St Modwen is now in financial difficulty and many expect it to be the first major casualty of the property crash.