Last week, police harassed anarchists giving out their free newsletter in Brick Lane, London. This week, things were quieter as others turned up to give support. Pictures (C) Peter Marshall, 2008, all rights reserved. 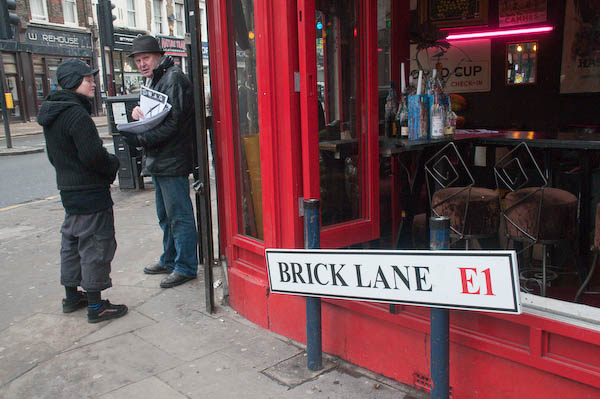 Handing out the Newsletter at Brick Lane 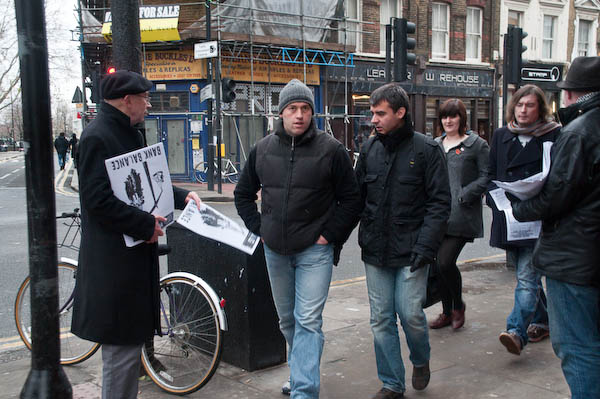 Not everybody took one 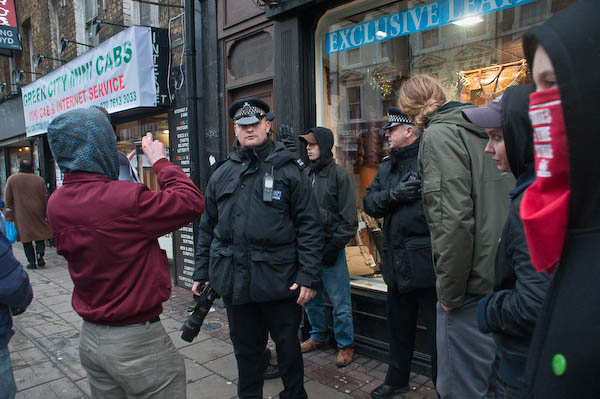 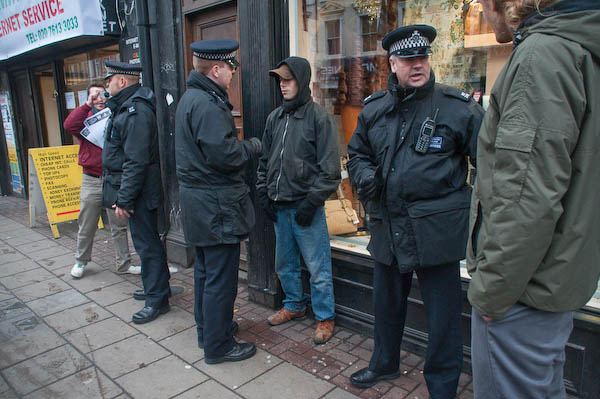 The full range of police units seemed to be out around Brick Lane on Sunday - and even at least one man who works for MI6 was claimed to have been spotted watching from a distance and making a phone call - but he may just have been out doing his Christmas shopping.

Members of Whitechapel Anarchist Group were harassed by police while distributing their newsletter last Sunday and had put out a call for support, and around 20 people turned up to stand around on the rather cold street near the bagel shops. This week the police were there again, but mainly stood back and watched from across the road, a police officer taking pictures of all who were there with a very long lens.

Many of those walking along Brick Lane seemed interested in the WAG newsletter and took a copy from the dozen or so people handing them out.

The police group with the photographer moved across the road and stood on the corner of Brick Lane. Apparently one young man, urged on by his friends, went and stood in front of the officer taking pictures, and was hauled off a few yards down Bethnal Green Road. I followed and took pictures keeping out of the way as the police questioned him and several of the anarchists questioned the police over their action while others took pictures of them from a closer range.

After a few minutes the young man was marched across the road and taken away in a waiting police van.

The police were obviously there expecting trouble, but there wasn't anything happening. People do find their photographic activities a harassment, and they do provoke sometimes rather silly retaliation, but the issue of the country becoming a surveillance society is an important one. In a recent court case involving one of those present on Brick Lane the police admitted to compiling and keeping a photographic database in which they could look up people and see which demonstrations they had attended.

Of course I publish a list of my own such activities myself, though that doesn't stop them repeatedly taking my picture, rather than simply looking on My London Diary!

Clearly their activities around Brick Lane today were a waste of public money, and worse than that. They don't make us any safer and were not combating any real threat to public order. If they have an agenda it is purely political.