Around 150 job losses have been forecast by opponents as part of large cuts across the university, along with the slashing of courses and funding. 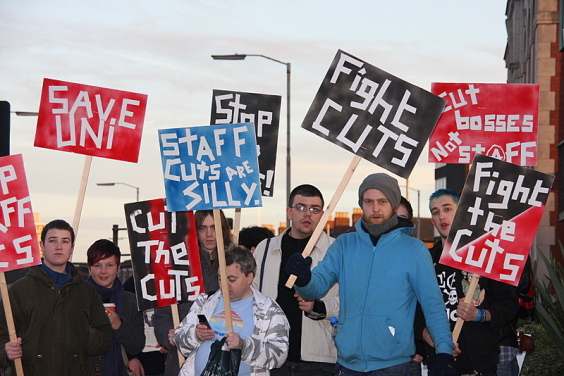 The job losses and cuts to courses and infrastructure stem from the ‘project headroom’ program currently being pushed through by university management, which aims to claw back £12.5 million for the university budget.

It is estimated that around 150 academic, teaching, frontline and administrative staff will lose their jobs as part of the cuts. Some workers paid by the hour have already laid off, raising questions about possible illegal discrimination against part-time workers. Additionally, Schools are expected to maintain the same level of output with a reduced workforce, increasing the pressure on those who remain. Students will be hit as a result of the axing of at least one (oversubscribed) course, and through cuts to the IT infrastructure, already some of the worst at a UK university.

Though management claims the cuts are necessary in order to secure funding vital to the future growth of the university, opponents have pointed to the reality of the handling of funds at the university in recent years. £3.9 million was spent on the procurement of a new building for the faculty of arts, media and social sciences, a building which never materialised due to the collapse of the project. Millions have been invested in expensive IT and admin projects, the implementation of which have been dogged by problems. The university has also invested large sums of money in a campus in China.

But the real drain on resources, which the university is seeking to recoup from staff and students, is its investment in the ‘Mediacity:UK’ project on Salford Quays. £40 million is budgeted to be spent on the project. The university and the BBC, who will be moving several departments to Salford as part of the project remain the only major investors in a development which is increasingly becoming seen as a vast white elephant. The project would create a large media industry hub on the quays, and the university plans to move arts and media departments there. Though students are seeing cuts in facilities and courses as a result of the plan, they will see no demonstrable benefits from the Mediacity. University management have claimed that they will enjoy access to the jobs created by the development, however a recent study by a New Zealand based academic in the Environment and Planning journal claims that the numbers cited for job creation are being pulled out of the air. Though the project’s cheerleaders claim it will create jobs and wealth for Salford, it stands only to benefit local media professionals and those who will move to the area along with the BBC. The most locals can expect from it are cleaning and security jobs. The article, by Brett Christopher of the University of Auckland, argues that locals will in fact lose out as a result of the gentrification that the project will entail, and the “shifting priorities” of local authorities who will seek to cultivate the media hub”. The real winners, according to the study, will be property developers who will enjoy the inflation of real estate prices on the Quays.

In short, staff and students are being squeezed in order to fund university investment in a project of no real benefit to either, and the attraction of which is the presumed future investment it will bring into the university when it has shiny new facilities. But all this assumes that the development will proceed as planned, which is extremely unlikely given the current climate. No investors other than the university and the BBC have been drawn into the project due to the economic situation and the collapse in property values. For the same reason, the BBC has been unable to sell its London properties and is looking to scale back its investment in the project. The Mediacity’s director has resigned after just a year in the job.

The university’s involvement will require £50 million per year in commercial contracts, of which it has so far signed none. It seems to be hoping that they will materialise when it occupies a building there. Given the economic climate, this is an obscene risk, and understandably there is real anger amongst staff and students that the investment in this project is trumping their jobs and courses.

Joint meetings are being held between university staff and students, and a cross-union campaign is building against the cuts, involving members of Education Not for Sale, the Industrial Workers of the World and the Anarchist Federation. A snap demonstration against the project drew over 40 protestors despite only being announced the day before, and received noisy support from passing motorists. Statements of solidarity with students and workers in Greece were read, along with the suggestion that lessons be taken from the determination they have shown.

Students and staff hope to build momentum and energy as the campaign develops during the next term, and for this to take place the practice of open mass meetings for staff and students must be continued and defended.

The UCU joint response to the proposals is available here:

For more on mediacity:uk, see The Salford Star, issue 8. (