The Japanese whaling ship Haiko Maru emerged from dense fog in front of the the Sea Shepherd MV Steve Irwin, crewed by anti-whaling activists about 0730 GMT December 26th, 2008. During manourvers by both ships a collision occurred causing minor damage to both ships, and no injuries, in Antarctic waters within the Australian Economic Exclusion Zone and Southern Ocean Whale Sanctuary, north of the Mawson Peninsula. 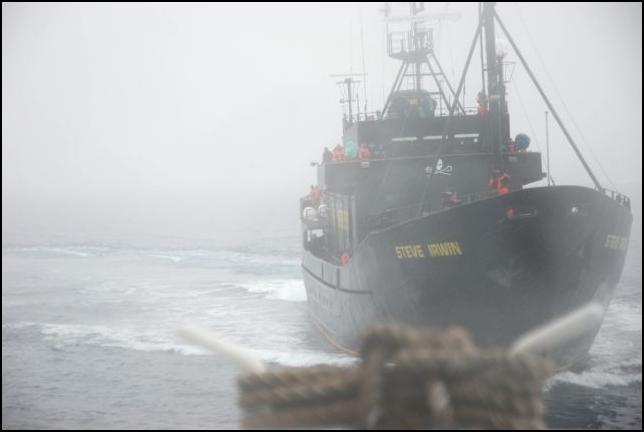 The Kaiko Maru had been undertaking a detour in the ice pack area after completing the day’s research activities, according to the Institute Of Cetacean Research (ICA).

The Steve Irwin pursued and came alongside the Kaiko Maru for anti-whaling activists to throw 10 bottles of rotten butter and 15 bottles of a methyl cellulose and indelible dye mixture.

According to a press release by the Institute Of Cetacean Research "The Steve Irwin rammed the Kaiko Maru from the starboard rear side and spent a number of hours in dangerous close-quarter harassment of the Japanese vessel, repeatedly overtaking and circling the Kaiko Maru."

The ICA confirmed that the "topside starboard rear bulwark was damaged" but the damage is "no hindrance to its present operation and research activities".

After the collision, the Sea Shepherd repeatedly overtook and turned around the Kaiko Maru for approximately three hours, according to the ICA, then the Sea Shepherd ship changed course to the east.

"Our objective now is to chase them out of Australia's Economic Exclusion Zone," said Captain Paul Watson. "I have a chart here and it clearly states that these waters are Australian EEZ. There is an Australian Federal Court Order specifically prohibiting these ships from whaling in these waters. We have informed the whalers they are in contempt of this Court ruling."

The Institute for Cetecean Research says their activities are legal under the scientific provisions of the International Whaling Commission, however
Whaling is a violation of International Conservation law and Japanese Whaling has been Found to be Illegal under Australian Law. The Whaling undertaken by the Japanese is clearly of a commercial nature and so also breaches the IWC conditions.