Strategic Importance of HLS in the broader anticapitalist fight

The campaign to shut down HLS has become a "meeting engagement"-a battle neither side can afford to lose. Here is what the pro-vivisection "Foundation for Biomedical Research" (or FBR) had to say in their 2006 "illegal incidents report" about the importance of the campaign to close Huntingdon "Life" Sciences (HLS) 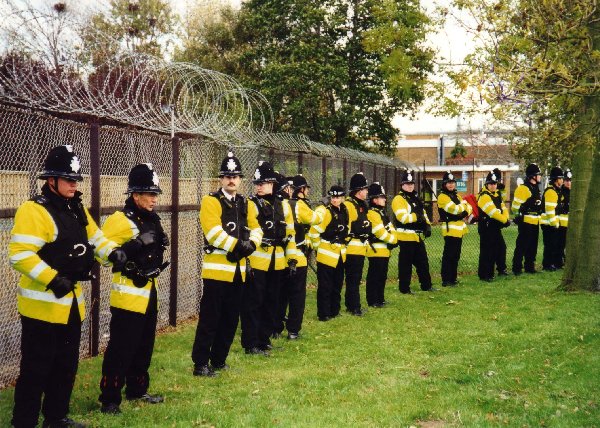 "Beyond the issue of research and the debate surrounding animal rights, there is a larger and more troubling message surrounding this regrettable pattern of capitulating to activist attacks. This is because those who seek to attack any corporation for any reason have, thanks to SHAC, now been provided with an effective model to gain publicity for their cause, seriously harm the company with which it has any complaint, as well as its employees, customers and vendors."

This is a quote from a document the FBR distributed on Capitol Hill during their 2006 campaign to pass the draconian revisions of the Animal Enterprise "Terrorism" Act. Most of the document whined about the steady drumbeat of protest and direct action against HLS-related targets.

What the FBR is saying in this particular snippet is that the battle over HLS has become so important that the capitalists can't afford to lose-no matter what. The Green Scare has in turn created a situation where opponents of capitalism also cannot afford to lose-or law enforcement gains a model to shut all of our movements down. In short, neither we activists nor the system as a whole can accept defeat on HLS, so it has become a strategic point of engagement affecting all of capitalism and anticapitalism.

First, some background: the campaign to close HLS is based on a mixture of protest by aboveground groups and direct action by underground operatives against any corporation that has any financial connection (of any kind) to HLS. This has driven away bankers and insurers to the point that the UK government had to set up a special account for HLS.

This "tertiary targeting model" has driven Huntingdon Life Sciences to its knees. Were it not for constant infusions of cash and aid from the entire industry, the UK government, and possibly the US government, HLS would long ago have closed their doors. Think about this for a moment: how many evicting landlords, land-destroying developers, or other capitalists short of war contractors would get this kind of backup? How many two-bit slumlords can get a special government bank account if anti-poverty activists succeed in driving away their bankers, insurers, and investors?

If we back down under fire, all targets of protest will know we can be waited out or crushed. If HLS goes bankrupt, every bloodthirsty multinational corporation on Earth will know people have the strength, the tools, and the strategy to make them next in line for bankruptcy.

Because of these extraordinary high stakes, the HLS campaign has become what is known in military terms as a "meeting engagement." A meeting engagement is a battle which may start small but gets bigger and bigger as both sides pour in more and more resources. This happens when neither side can afford to lose.

Entire wars often turn on the outcome of battles with names like Midway and Stalingrad that ring through history. What happened at Stalingrad? Neither Hitler nor Stalin would accept defeat in a city named after Stalin, causing both sides to pour in so much of their military assets that the winner of Stalingrad (Russia) was able to drive all the way to Berlin with little further opposition. Stalingrad was destroyed, but so was Gen Paulus's Sixth Army, and the Nazis never recovered. All that over a city the Nazis could have bypassed had it not been named after Stalin-over a NAME!

HLS might seem like a tempest in a teapot compared to the great battles of history, but if HLS collapses, everyone fighting against any part of capitalism whatsoever will have a battle-proven roadmap to victory. If law enforcement succeeds in crushing the opposition to HLS, then they would be the ones with a battle proven roadmap to victory, risking defeat for every anticapitalist cause inside the borders of the Empire. This means the Battle of HLS has become a meeting engagement, and neither we nor they cannot afford to lose this fight no matter what the cost.

If activists in wealthy nations are able to begin shutting down the worst corporate offenders with names like Exxon and Nestle, we will shorten the global conflict over capitalism and save human lives. HLS may sound like it is only an animal rights issue, but believe me-it has morphed into the meeting engagement between anticapitalist fighters and the servants of the Enemy. If we succeed in destroying HLS and then use the same tools to bankrupt murderers like Exxon and Bechtel, rest assured history will never forget our sacrifice and struggle.

The police and the FBI have declared war on pro-animal and pro-Earth activists. Now it's up to us to fight and win the battle, not just for us, not just for the animals imprisoned in HLS, but for everyone victimized by corporate power or any of its wholly-owned police and military subsidiaries. Show these brutes no mercy, fight them with no quarter asked or given, for we shall receive none!

Don't just take our word for it, this is what HLS said at their 2008 AGM (LSR is Huntingdons trading name):

"Animal rights extremists have targeted, and may continue to target, the US financial community that trades LSR Voting Common Stock, which has caused and may continue to cause liquidity and a lower market price of the Voting Common Stock. The animal rights extremists have in the past harassed the financial community that trades in LSR shares, including market makers, stockbrokers, auditors, investors and trading platforms. The liquidity and market price of the shares of LSR Voting Common Stock could be adversely affected in the future by such actions."

And this is why Huntingdon are so desperate to avoid liquidity, and a lower share price:

"The Company has approximately $83 million of outstanding debt. $59 million of this debt is due on march 1, 2011 and the remaining debt is represented by capital leases, primarily related to the sale and lease back of the Company's facilities. If the company is unable to pay or refinance this debt when it becomes due, or to pay its carrying costs on such debt in the form of interest, the Company could face a default under the terms of its loan agreement. A variety of factors, including worsening financial performance, failure to comply with financial covenants and pressure from animal rights extremists, could make it difficult to pay or refinance this debt."