As the Israeli air force continue to bombard the Palestinian civil structure and the democratically elected HAMAS (H.arakat al-Muqawama al-Islamiyya) leadership, people of all faiths gather at the Israeli embassy in London to voice their anger at the assault and the number of civilians killed. 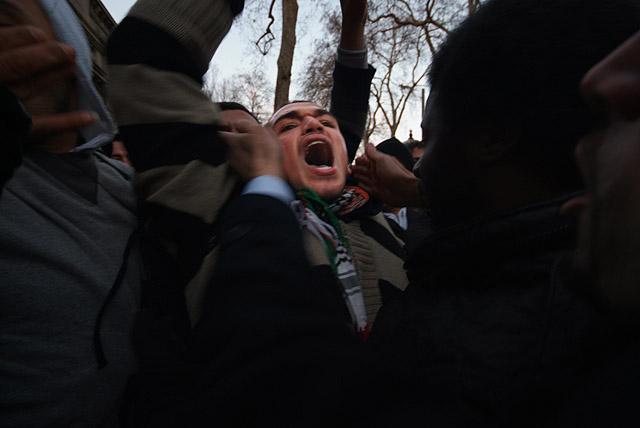 A man shouts in anger. 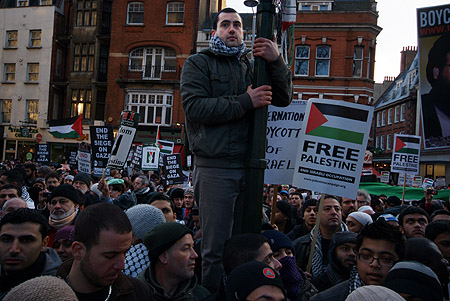 The crowd gather at the Israeli Embassy. 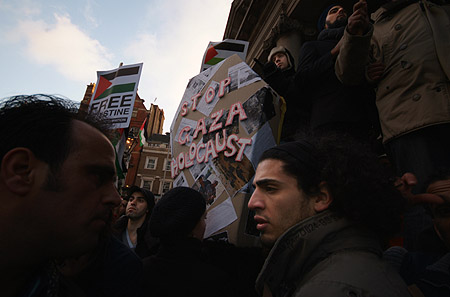 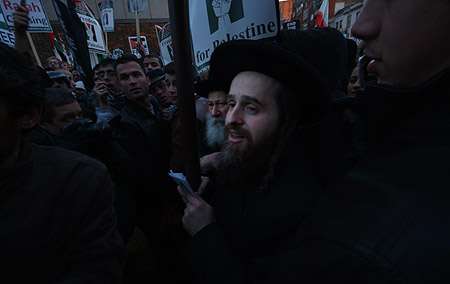 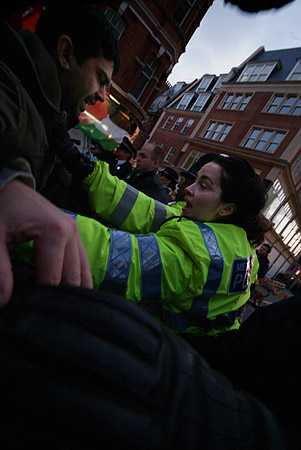 Police attempt to control the crowd. 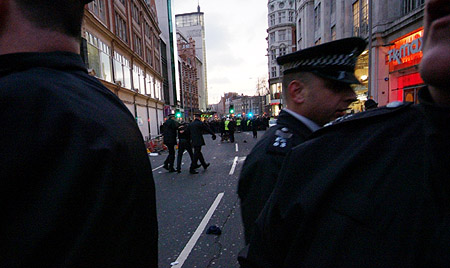 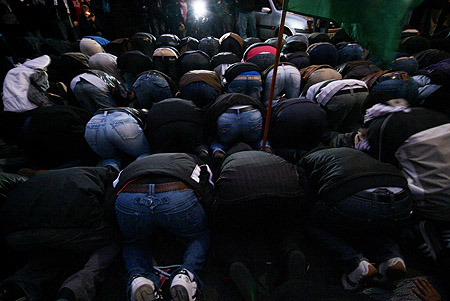 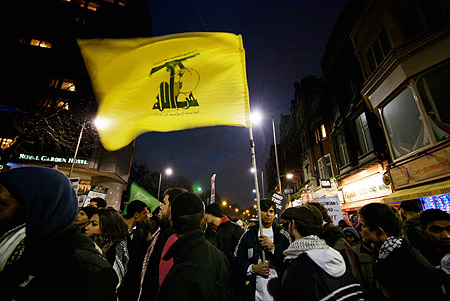 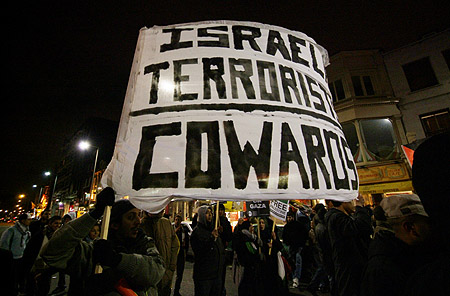 As the Israeli air force continue to bombard the Palestinian civil structure and the democratically elected HAMAS (H.arakat al-Muqawama al-Islamiyya) leadership, people of all faiths gather at the Israeli embassy in London to voice their anger at the assault and the number of civilians killed.

The Palestinian infrastructure is now severely stretched as a result of the military assault with reports that hospitals are now operating at breaking point with drugs and essential supplies in short supply.

So far over 280 people are reported to have been killed, most of them civilians including children.

Police take a strong line with the protesters and a number of people are arrested and taken away. Several are also injured as police officers push violently at the crowd in an attempt to get them to move away. Throughout, Kensington High Street is closed and remains closed for much of the afternoon.

The protest is scheduled to be repeated tomorrow, Monday 29th December.

Solidarity with all those who brave the batons

But I should point out that MI5 have long discussed the possability of exploiting demostrations against yet another Israel war at the Israeli embassy as a way of gathering intelligence on Muslim and other extremist groups within the UK. Personally I wouldn't be in much of a rush to stand ina pig pen and have my photo taken by the FIT.

As the last comment says, I wouldn't be in a rush to get into the designated protest box either. It's the quickest way to render your protest acceptable and therefore ineffective. It's far better to remain outside any pen, to remain mobile and free to take the action (and risks) you feel up for. At the demonstration there will almost certain be large numbers of Territorial Support Group (riot police, who you can tell by the U on their shoulders, if they're bothering to wear numbers). Their standard tactic is to put people in a kettle, surrounded by police and held until they feel there is no further risk of public disorder. Prior to putting this tactic in place, a loose line of police will generally form about the crowd to be corralled. At this point, it is best to move beyond the police lines unless you have nothing to do for the rest of the afternoon. Sometimes the police let you know what's coming by shouting 'bubble', which is their designation for the kettle.

Always keep an eye on your back, so you can get away. Have one route - or preferably two - to leave the vicinity. If you're with someone, keep an eye on each other. Have a pen and paper so you can write details of any arrests or police brutality you see. Leave ID at home - you don't have to give your name, address or any other details to the police if you're being stopped and searched. Take pictures of any police misbehaviour you see, you've every right to and you might as well.

And if push does come to shove and it does kick off, please don't throw things from so far back you hit demonstrators at the front! It's rude!

its amazing how similar people look in black robes, with dready hair & a beard. As a universalist brought up christian despite I can reasonably easily become a universalist christian minister officially if I wanted as well. Universalists have respect for all other members of other faiths not acting repressively, quakers are an example. They also practice direct democracy & are known by some as the "church of anarchy" in the true democratic meaning of the word

Check universal sufism founded by Hazrat Khan more suitable for those brought up within islam,compared to quakeris the christian universalist church which has campaigned for direct democracy & tolerance for many years.

http://en.wikipedia.org/wiki/Universal_Sufism
its our right to dress up as a radical abrahamic bloc

Universalist Confederalist is also known as Green Syndicalist & will probably starting a blog on direct democracy soon as afew people have pointed out to me that it might be a good idea.Xmas greetings & happy new year

What do you mean, Jewish men attemted to take part? They did take part. They had some Jews Against Zionism flyers that the crowd eagerly distributed. One nutter had shouted some disgusting anti-semitic line earlier and been angrily shushed by the rest of the crowd. Other than that there was no anti-Jewish sentiment expressed, only anti-Israel.

nothing but _TROUBLE_ for the past 75 YEARS!!

All good comments about the kettles but it's worth remembering that after the 06 Lebanon War it occured to MI5 that it might be an idea to attempt to divert you Muslim males into the protest movement as a way to keep them out of the terrorism movement. Their first attempt was the ultra peaceful British Opression demos of 07 which were a complete failure. Having been given a year to refine the stratergy they're likely to encourage or allow a little naughtieness at these STWC pickets in order to make it seem more "cool".

Sovereign, what on earth are you talking about?

Do you sit in on MI5's meetings? Or are you just some stupid pillock police officer trying to intimidate people into staying at home and hiding behind the sofa?

People are angry, people want to protest, they have just cause to do so so please just be quiet and stop with this pretend nonsense...ok!

If you have to have your say then please write to the British government and ask them why they are actively supporting fundamentalist extremists in Israel in their barbarism against a defenceless civilian population.