Venezuela: Trade unionism between the servile bureaucracy and the hired killers

* In the difficult times being experienced by the Venezuelan labour movement, perhaps the most dramatic issue have been the criminal acts that kills tens of trade unionists to the passivity of the pseudo-revolutionary government and the silence of his admirers from outside the country. It speaks about it this text of El Libertario # 55, January-February 2009. 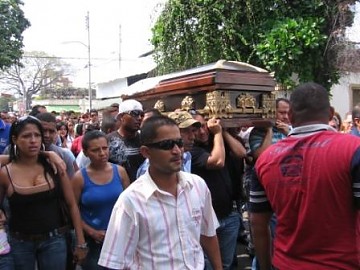 
“In revolution, trade unions must disappear ... trade unions were born with the same poison of the autonomy. The trade unions can not be independent, we should finish with that”.
Hugo Chávez speech at the launch act of the PSUV. Caracas, 24-March-2007.

The coward execution of 3 worker leaders of Aragua state, which occurred on 27/Nov/2008, requires paying attention to the criminal practices that in recent years have become customary within the remainder of the prostrate trade union movement. As has happened elsewhere in the world, a sign of low times in labour militancy is the growing presence of gangster procedures of all kinds, which begin to be a fatal routine that further aggravated the decline of workers struggle.

Part of the concrete evidence of how far the rowdy perversion had come within the trade unionism has been collecting - in its more sinister side, as is the murder of labour activists - in the reports for the years 2007 and 2008 of the human rights organization PROVEA www.derechos.org.ve. Based on the collection of what was published in newspapers across the country, these reports provide a record that we feel are very trustful with the facts relating to the topic we are interested in and which highlights an alarming calculation: _between October 2006 and September 2008 occurred in Venezuela 77 killings of trade unionists_. The crimes were mainly against unionists linked to the construction and oil sector, being caused almost entirely to fight for the control of the mechanisms to provide employment with the contracts of these sectors, in which a high percentage (75% for construction) is in the hands of the trade union, so that whoever dominates the union directive makes his self lucrative slices selling jobs to whoever needs it. It should be noted that in these struggles, with the results of deaths, do not even exist the added fact of political differences, because both sides tend to identify with the same force with the ruling government.

The situation is so serious that the 2007 Report of PROVEA states that, after Colombia, Venezuela is the country where there is more danger for anyone who practices the trade union activity. In addition, impunity and accomplice silence join this dreadful situation. A report of the Human Rights Vicar of Caracas - attached to the PROVEA Report of 2007- notes that on 52 recent cases of murders of trade unionists, only 3 have been criminally punished. For them part, the trade unions (whether they are oppose to the government, such as the haggard Confederation of workers of Venezuela -CTV-, or related to it, such as the inoperative National Union of workers -UNT- or the submissive Socialist Bolivarian Workers' Force -FSBT-), have not made any campaign, any deliver or any heavy complaint about this atrocity. As for the spokespeople and devotees of the “Chavismo” get rid of the uncomfortable issue, if they ever deal with it, attributing the situation to the ubiquitous plots of the “Empire” in partnership with the local employers; ironic claim considering that in the construction and oil sector who is not working directly for the government, works to someone who is hired by the state. Nor could be miss the classic government answer when they want to disregard a thorny issue: in 2007 it was decreed a Commission of High Level against Trade Union Violence, which after a while we no longer knew anything about it.

- The gangster way moves on

The surrounding circumstances at the vile murder of Richard Gallardo, Luis Hernandez and Carlos Requena point to an escalation in the presence of criminal ways in the trade union association. Their relatives and close friends in the labour and community struggles, expressed from the beginning that their main suspects as the responsible for ordering the massacre lay to the union bureaucrats and regional political leaders linked to the ruling party, (in particular the mayor of the city of Villa de Cura and his brother, chief of the chavistas guilds). That presumption was even reflected in various media reports, particularly because it was proclaimed by many people loudly in the various rallies and protests in the region through the days following the killings. A slogan repeated at the rallies was the allegation of "trade unions hired killers," regarding the mode driven by corrupt bureaucrats to remove activists that hinder their dirty business. In this specific case, the three dead people were militants of a Trotskyite group which has achieved a foothold in the area (for example, Hernandez was General Secretary of the trade union of Pepsi-Cola in Villa de Cura, where he achieved 3816 votes as a candidate for mayor). That group – of which the best known reference nationally is the union leader Orlando Chirino - has been, in the last 2 years, opening a critical distance to the ruling party, which along with the denounces and actions that were promoted by them in the Aragua state became an obstacle for the regional mafias that now are accused by the popular voice.

To enhance the suspect, it is also the murky handling the government and its acolytes have made with this crime: their spokesmen silent until - 4 days later - Chavez mentioned the incident, suggesting a blurred responsibility of foreign companies and paramilitary forces (??? !!!), this was based on the claim that the deceased workers had gone that day to offer their solidarity to the workers of a Colombian-owned company. From this and similar stories were fed the official version - followed with passion for international fans of the "Bolivarian revolution" - that changed when the Minister of Interior announced the arrest of the perpetrator of the murders, saying that the cause of the fighting was done for the control of the collective contract in the fizzy drinks industry. This outraged the bereaved; introducing the assassination as a vulgar "settling of accounts", besides that the person accused for the deaths - an employee of Pepsi- Cola - would be a scapegoat, because several witnesses place him at his work site at the time of the event. As a final touch, the new “chavista” governor of Aragua, who had not said anything, at last opened his mouth to ensure that would not allow more protests over the killings because he had precise information that these protests served to the purposes of a destabilizing plan (again ???!!!). The other thing was, as we can presume; declare an Official Commission which will look into the matter...