On 3rd of January 2009 about 300 protesters showed up at Guildhall Square in Portsmouth to voice their anger at the Israeli bombing and siege of the Gaza Strip. A raliegh was held with several speakers, two of them Palestinians, followed by a march through the city center to a Tesco's store where leaflets were distributed to shoppers. 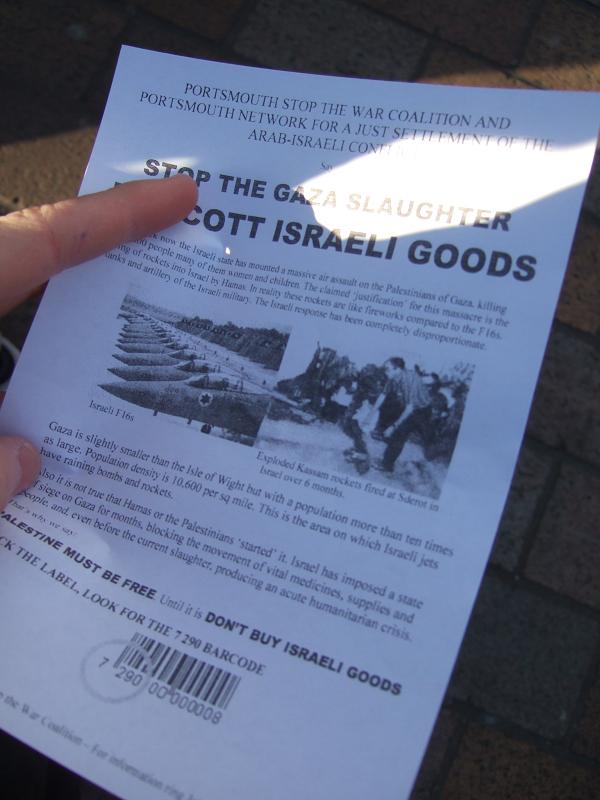 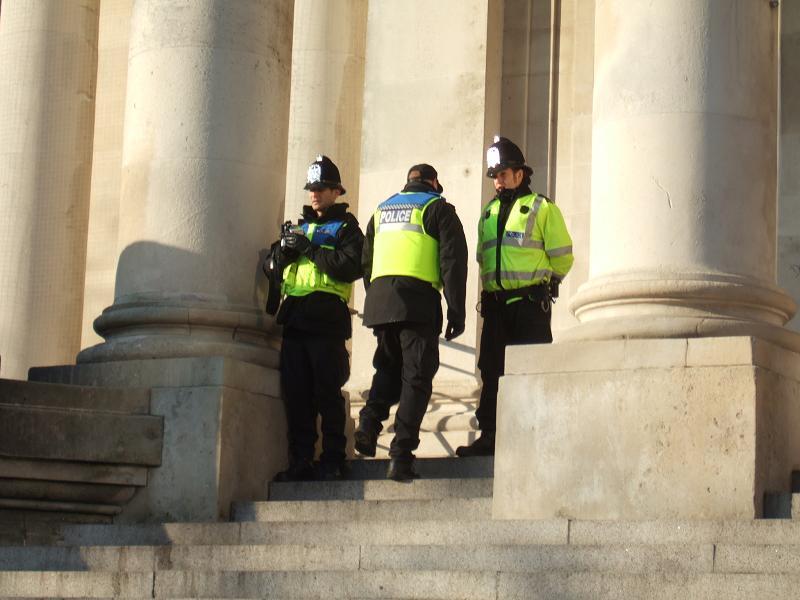 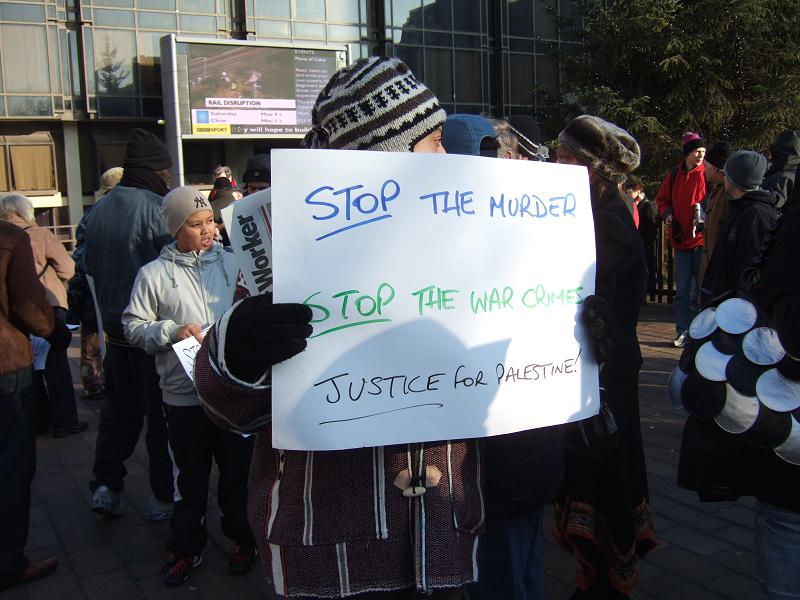 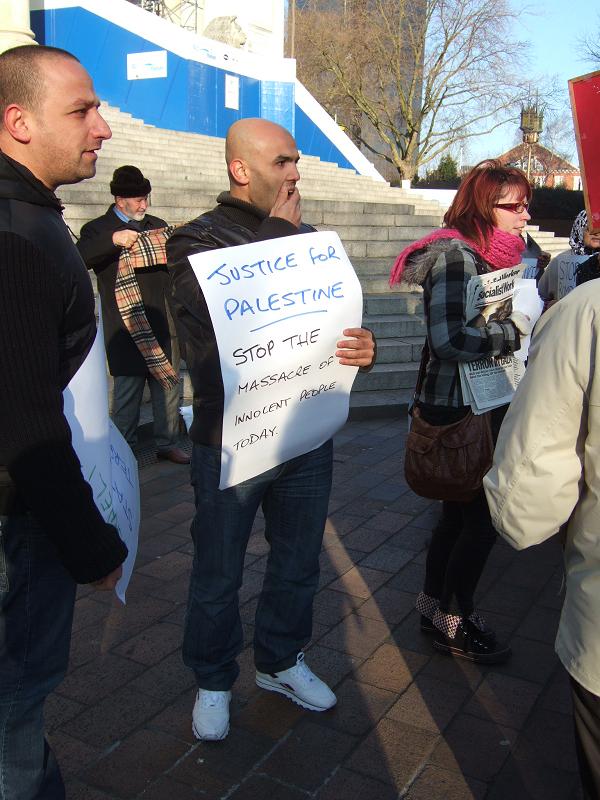 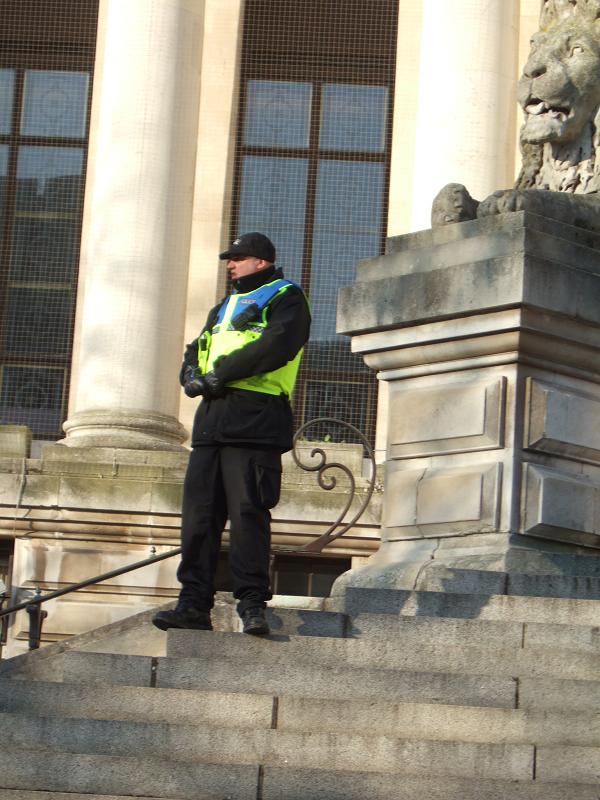 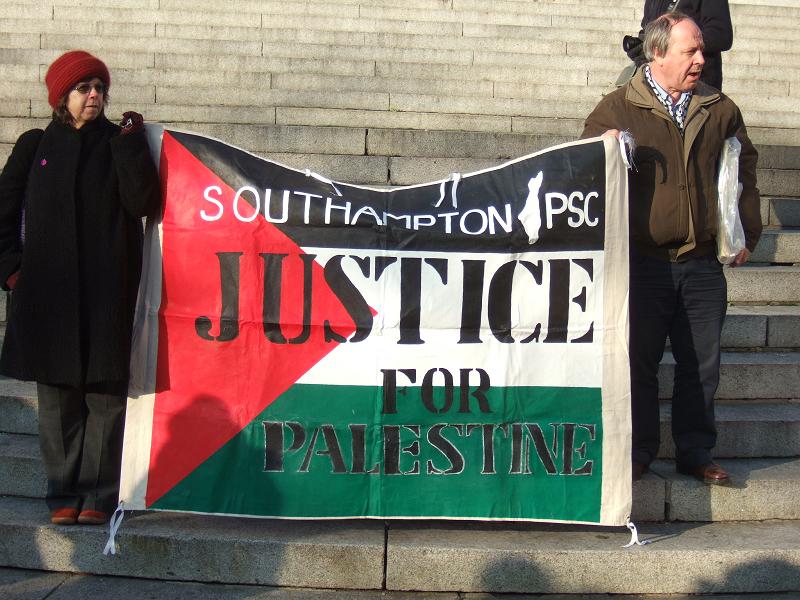 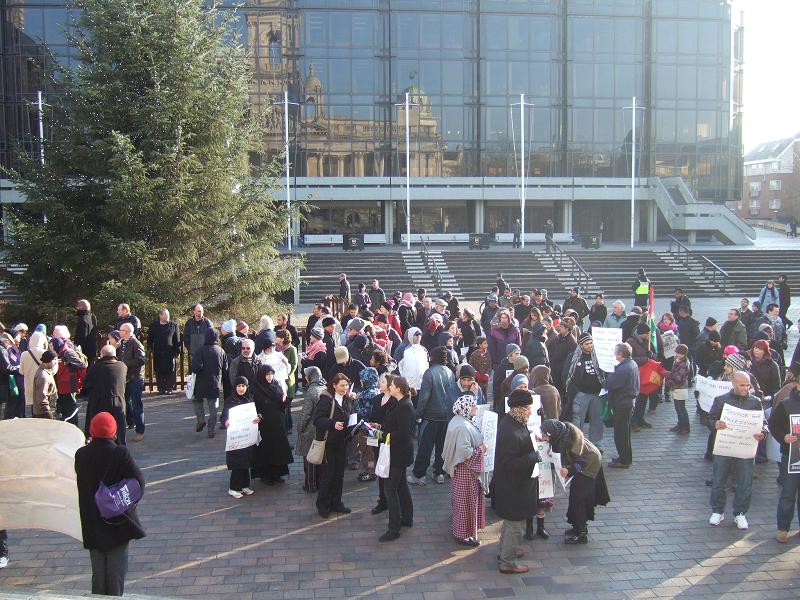 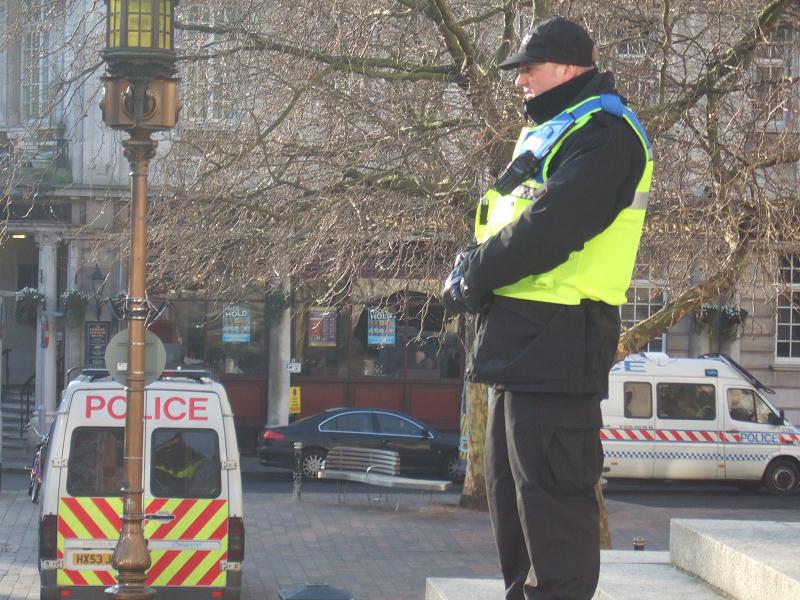 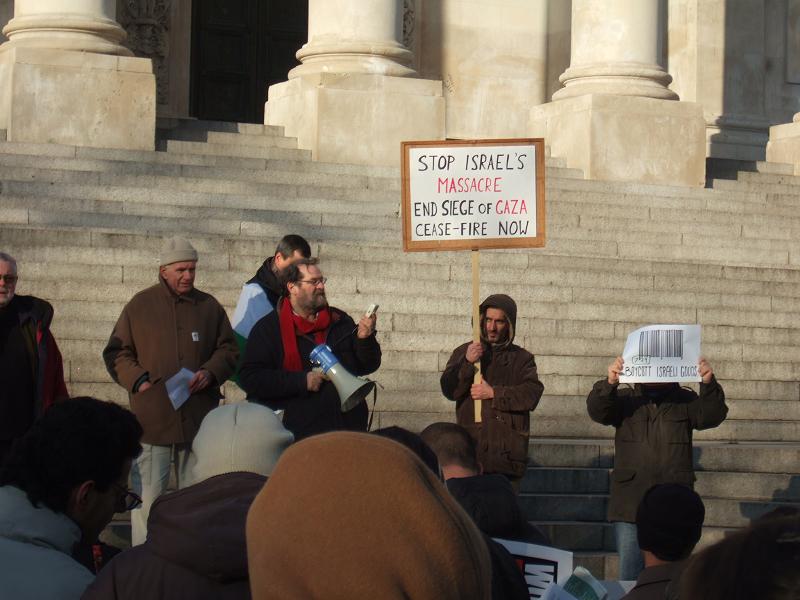 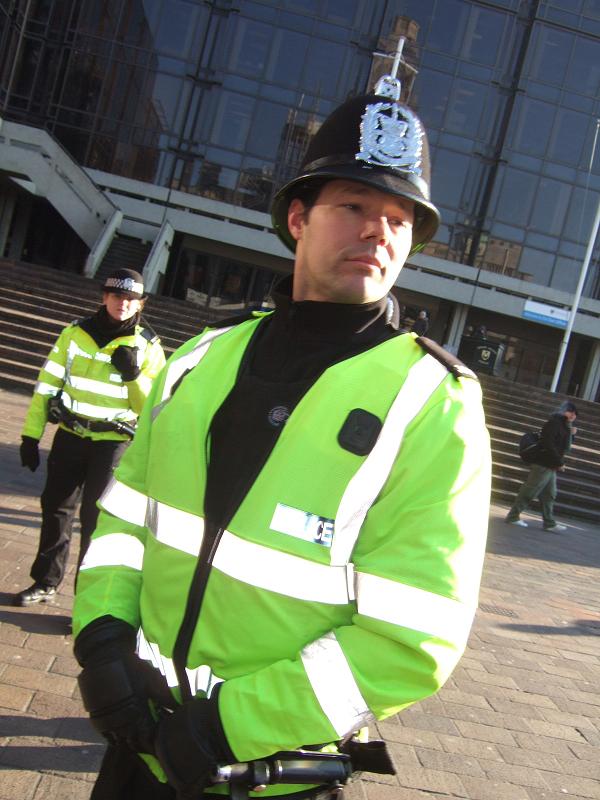 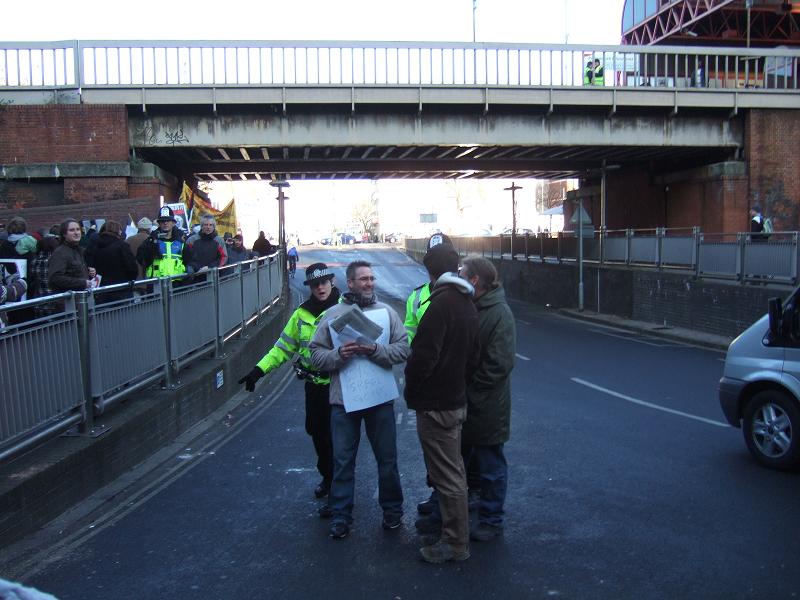 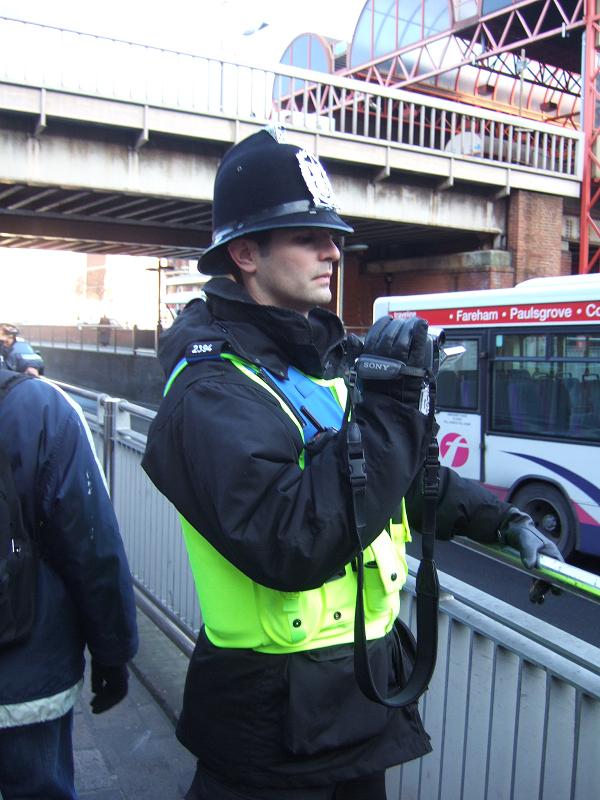 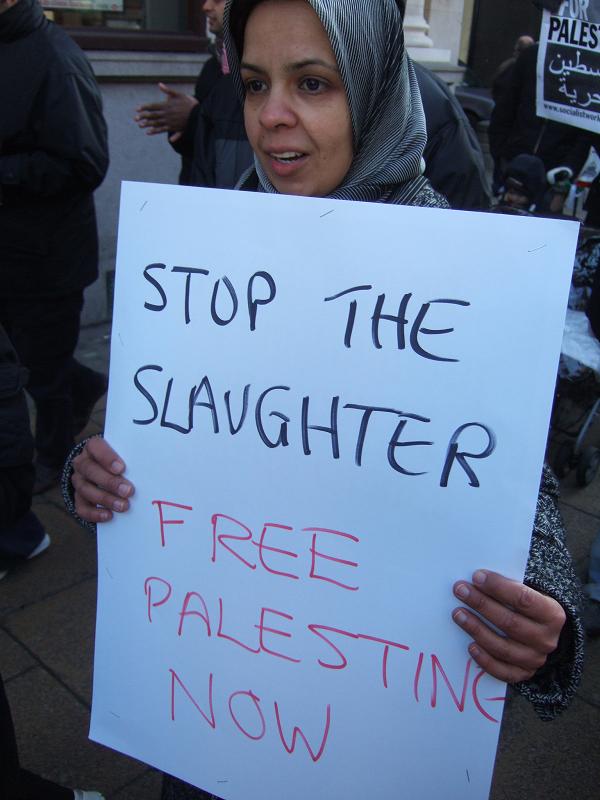 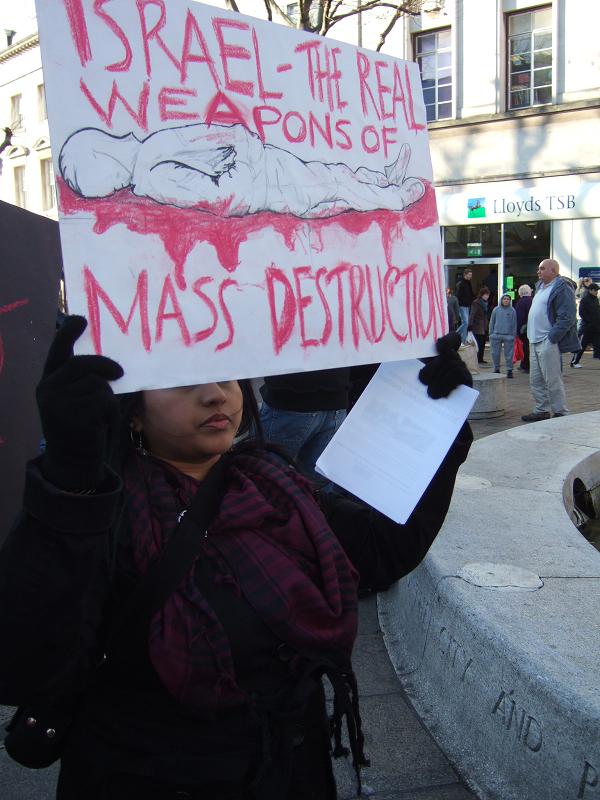 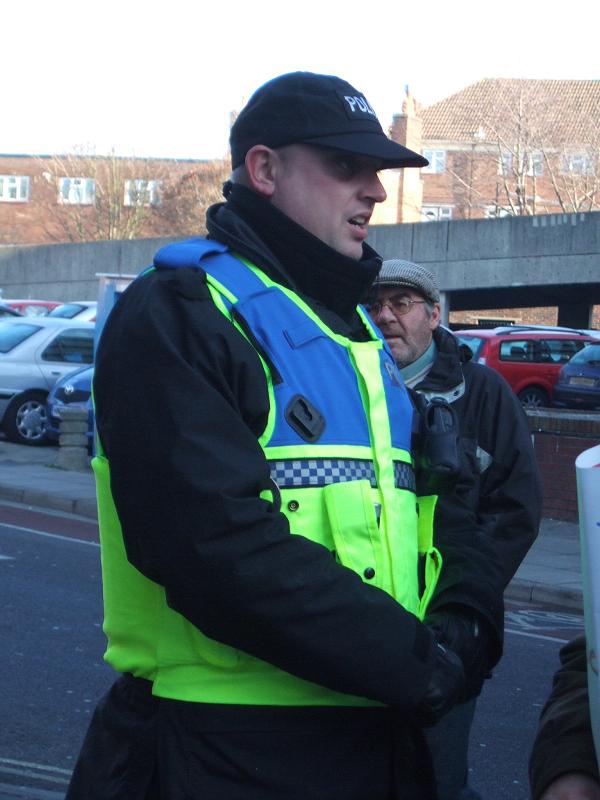 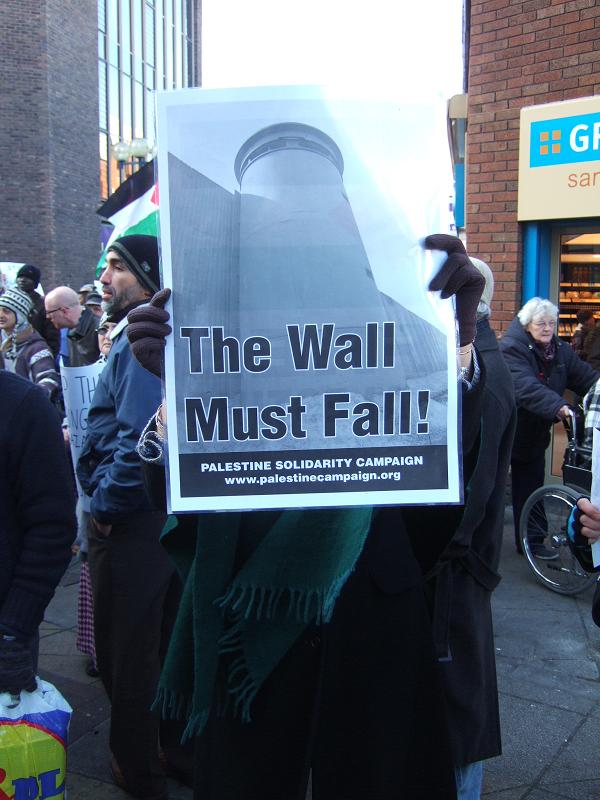 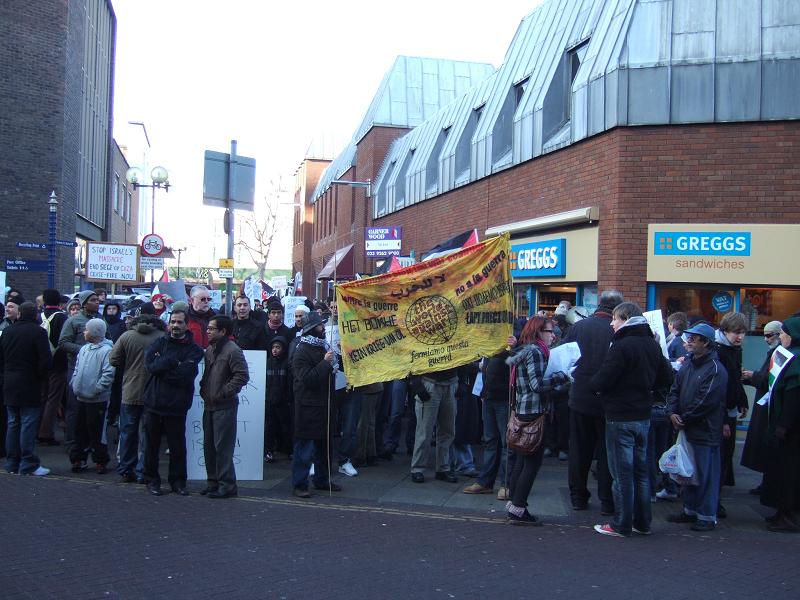 The action was organised by Portsmouth Stop the War Coalition and Portsmouth Network for a Just Settlement of the Arab-Israeli Conflict (PNJSAIC? - not too catchy). Angus Geddes from the PNJSAIC was first up to speak and told how the Israeli bombardment of Gaza was "murderous" and that "collective punishment of the people is a war crime". He also spoke of the four dead Israelis saying it is "four too many". Geddes called for a boycott of Israeli goods which are identifiable by the barcode which starts with the numbers 7290.

Al-Sama (sp?), a Palestinian also spoke about the situation in Gaza. "What would you do if someone occupied your house? This is what happened to Palestine" he said, also paralelling the Israeli treatment of Gaza with the Nazi treatment of France during WWII.

A doctor (I believe) also spoke, emphasising the need to forgive and move on. He highlighted the irony of both sides praying to the same God for deliverence from each other. He considered the Arab-Israeli conflict as an unholy mess due to corrupt politicians, with little to do with religion. He also called for a boycott of Israeli goods.

Just before the march began, the organiser (whose name I didn't catch) informed us over the megaphone that police had just told him the march was in fact illegal and threatened him with arrest if it went ahead. In a spirit of defiance he said the march would continue as planned. "Maybe they will, maybe they won't" was his opinion of the cheap police threat. Unfortunately some passers-by shouted some racist comments and "attack! attack!". I do not believe they were apprehended by police for these racist shouts, but what do you expect?

The march set off with a seemingly minimal police presence. I counted three police cars and three police vans at the raliegh and several police escorted the march to Tesco's. I witnessed a brief altercation between a couple of protesters and police. The protesters wished to walk on the road but the police informed them they would block the road, and then proceeded to walk down it themselves.

Reception of the march through town seemed quite positive with people stopping to look at what was happening. The demonstration was entirely peaceful and concluded with chants and distribution of leaflets outside Tesco's. I am unaware whether police carried out their threat of arrest on the organiser.

Organiser due to appear in court

John Molyneux, local SWP supremo and "organiser" of this event, is due to stand trial on April 17 under the Public Order Act for failing to give six days notice of the demo. Even the local rag is supporting him: