Report of Emergency Protest in Newcastle ‘Stop the Massacre in Gaza’ 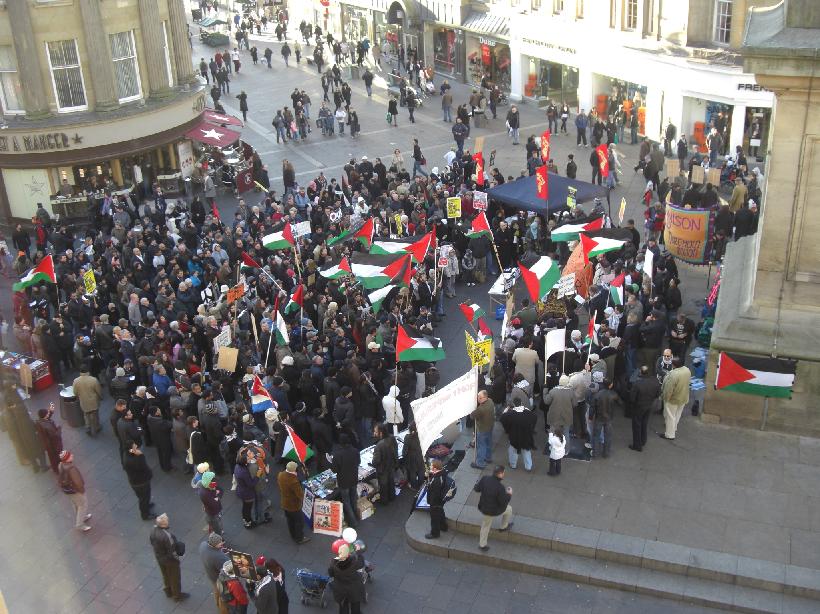 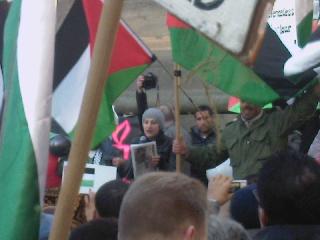 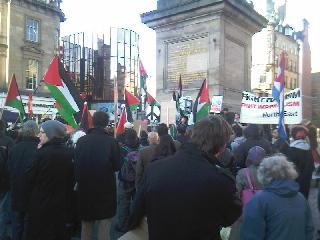 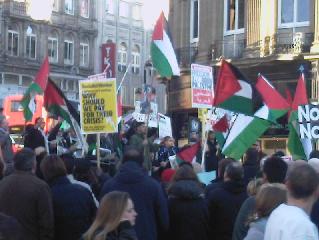 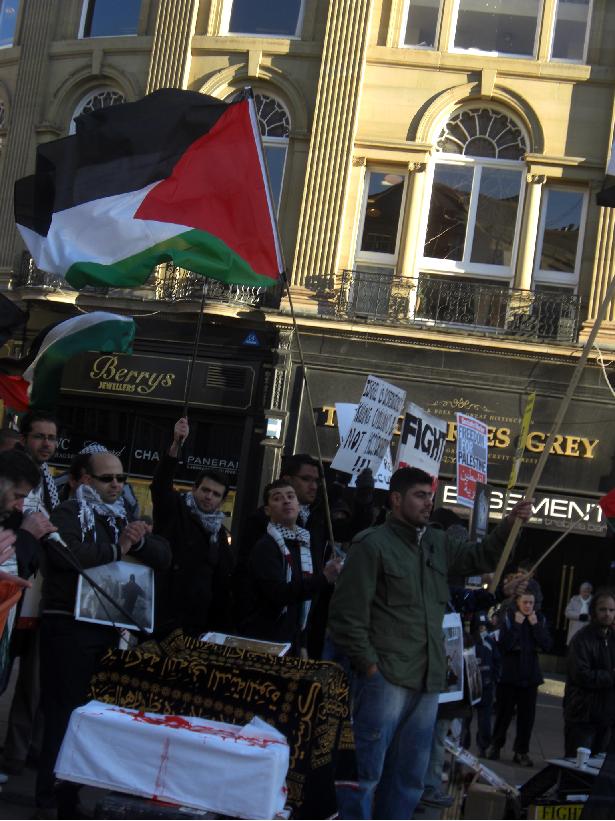 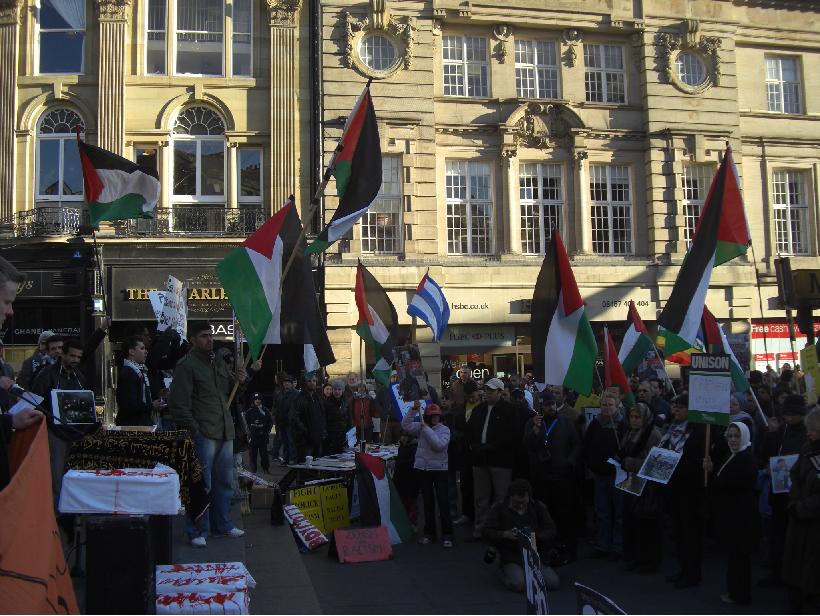 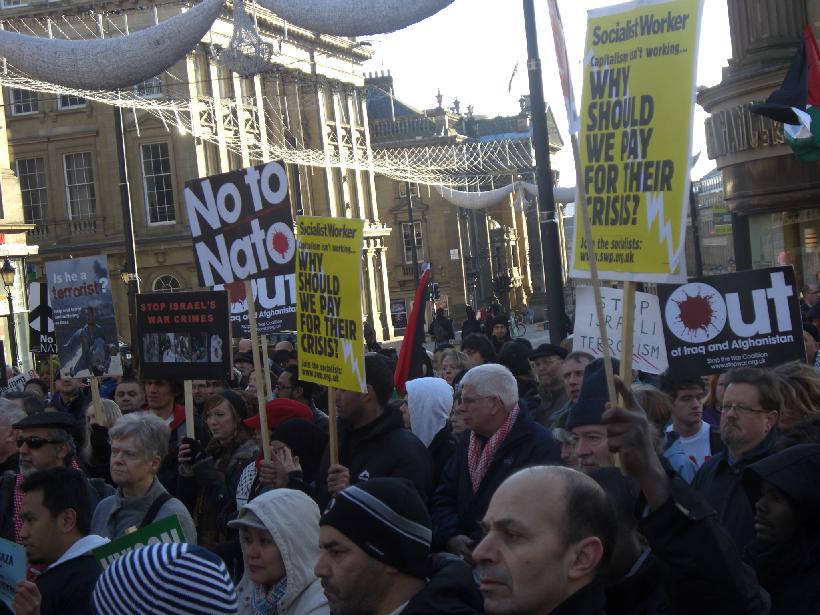 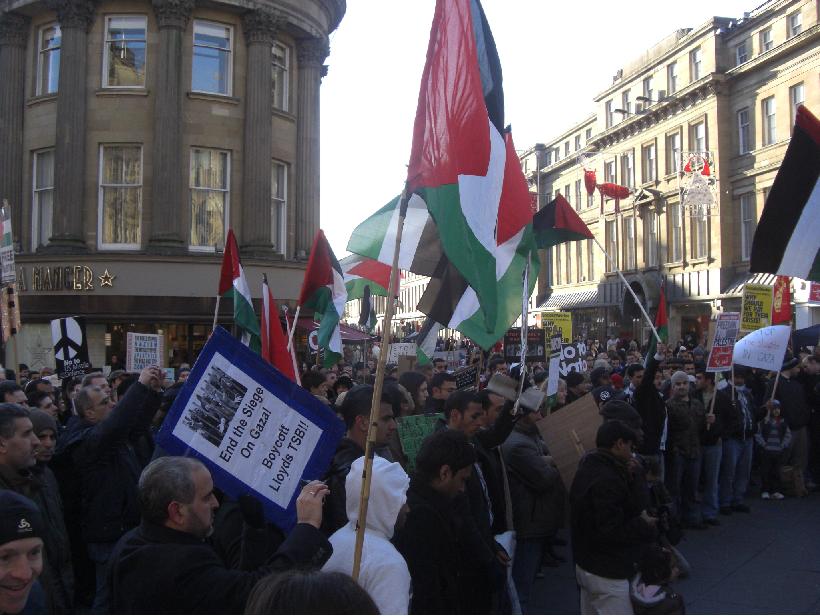 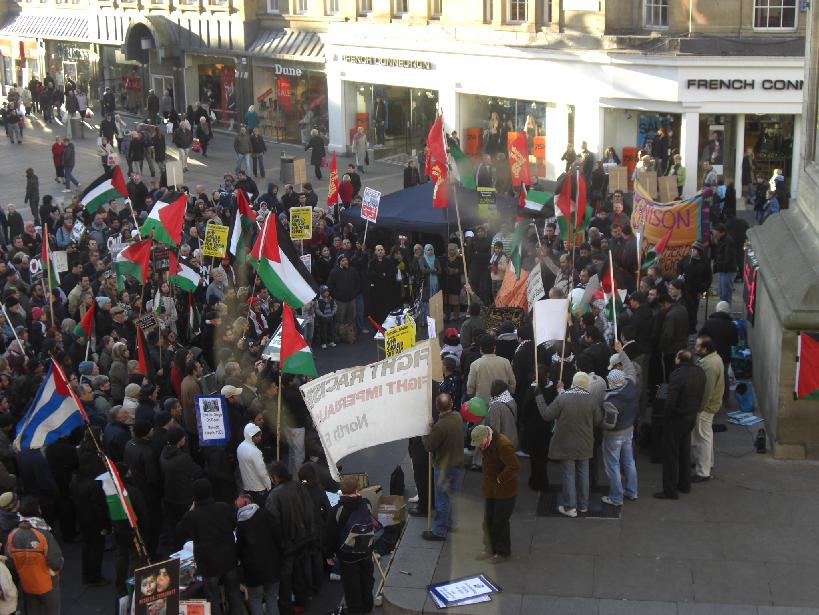 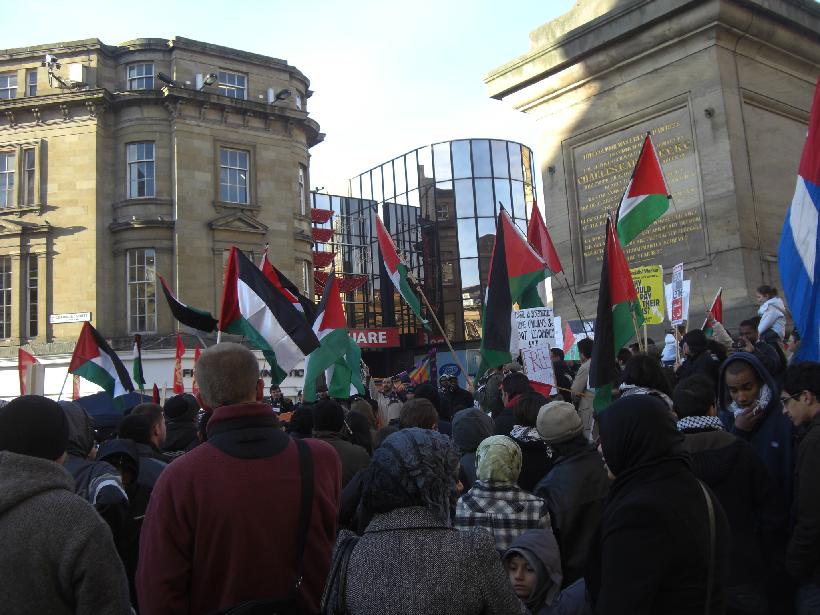 On Saturday 3rd January 2009 there was a rally held at Grey’s Monument in solidarity with the people of Palestine, against the occupation and the siege on Gaza. It was organized by individual Palestinian people in Newcastle, the Palestine Solidarity Campaign, the Stop the War Coalition and the Revolutionary Communist Group/Fight Racism! Fight Imperialism!

It was attended by around 400-500 people from 12-2pm and remained vibrant throughout. On the platform there were speakers from the Palestinian community, the PSC, the University Mosque and FRFI.

The FRFI speaker explained why it was fitting that a celebration of Cuban resistance, originally planned from 12-4, made way for such an urgent demonstration of solidarity with Palestine, highlighting Cuba's active solidarity with the Palestinian cause and their shared struggle against imperialism. She compared the solidarity shown by socialist Cuba to the role played by Britain as an imperialist country: 'While socialist Cuba exports doctors and teachers, capitalist Britain exports instruments of repression'. She went on to emphasize that 'British imperialism has consistently colluded with Zionist terror throughout the years of Intifada and that Israel could not survive without the support of US and British imperialism'. The speech ended with a call to support the third Palestinian intifada called by Hamas from within the heartland of imperialist Britain, by getting out on the streets and targeting key links in the chain of support from Britain to Israel, like Marks and Spencer, Britain's biggest corporate sponsor of Israel and the Labour Party, which has always been a racist, imperialist party and which has supported Zionism since its 1944 conference called for the establishment of a Jewish state in Palestine.

There was then an open mic session where speeches were interspersed with chants of ‘Victory to the Intifada!’ ‘Free, Free Palestine!’ ‘1,2,3,4 Occupation No More! 5,6,7,8 Israel is an Apartheid State!’ etc.

It was also highlighted that, although there was a massive turnout and it was an inspirational event, this would not change the situation in Palestine and had to be the start of a movement on the streets of Newcastle putting pressure on the British government.

So there will be a public forum on Gaza and action we can take in Newcastle on Tuesday 6th January, 7-9pm at the Culture Café (above Get Stuffed takeaway), Mary’s Place (near Haymarket metro), Newcastle hosted by FRFI. All groups and individuals welcome.

There will also be an organizing meeting held by the PSC and Stop the War on Wednesday 7th January, at Muslim Welfare House, meeting at 6.30pm outside Mark Toney’s near Haymarket metro, Newcastle.

From the head of the Hamas Policital Bureau

For 18 months my people in Gaza have been under siege, incarcerated inside the world's biggest prison, sealed off from land, air and sea, caged and starved, denied even medication for our sick. After the slow death policy came the bombardment. In this most densely populated of places, nothing has been spared Israel's warplanes, from government buildings to homes, mosques, hospitals, schools and markets. More than 540 have been killed and thousands permanently maimed. A third are women and children. Whole families have been massacred, some while they slept.

This river of blood is being shed under lies and false pretexts. For six months we in Hamas observed the ceasefire. Israel broke it repeatedly from the start. Israel was required to open crossings to Gaza, and extend the truce to the West Bank. It proceeded to tighten its deadly siege of Gaza, repeatedly cutting electricity and water supplies. The collective punishment did not halt, but accelerated - as did the assassinations and killings. Thirty Gazans were killed by Israeli fire and hundreds of patients died as a direct effect of the siege during the so-called ceasefire. Israel enjoyed a period of calm. Our people did not.

When this broken truce neared its end, we expressed our readiness for a new comprehensive truce in return for lifting the blockade and opening all Gaza border crossings, including Rafah. Our calls fell on deaf ears. Yet still we would be willing to begin a new truce on these terms following the complete withdrawal of the invading forces from Gaza.

No rockets have ever been fired from the West Bank. But 50 died and hundreds more were injured there last year at Israel's hands, while its expansionism proceeded relentlessly. We are meant to be content with shrinking scraps of territory, a handful of cantons at Israel's mercy, enclosed by it from all sides.The truth is Israel seeks a one-sided ceasefire, observed by my people alone, in return for siege, starvation, bombardment, assassinations, incursions and colonial settlement. What Israel wants is a gratuitous ceasefire.

The logic of those who demand that we stop our resistance is absurd. They absolve the aggressor and occupier - armed with the deadliest weapons of death and destruction - of responsibility, while blaming the victim, prisoner and occupied. Our modest, home-made rockets are our cry of protest to the world. Israel and its American and European sponsors want us to be killed in silence. But die in silence we will not.

What is being visited on Gaza today was visited on Yasser Arafat before. When he refused to bow to Israel's dictates, he was imprisoned in his Ramallah headquarters, surrounded by tanks for two years. When this failed to break his resolve, he was murdered by poisoning.

Gaza enters 2009 just as it did 2008: under Israeli fire. Between January and February of last year 140 Gazans died in air strikes. And just before it embarked on its failed military assault on Lebanon in July 2006, Israel rained thousands of shells on Gaza, killing 240. From Deir Yassin in 1948 to Gaza today, the list of Israel's crimes is long. The justifications change, but the reality is the same: colonial occupation, oppression, and never-ending injustice. If this is the "free world" whose "values" Israel is defending, as its foreign minister Tzipi Livni alleges, then we want nothing to do with it.

Israel's leaders remain in the grip of confusion, unable to set clear goals for the attacks - from ousting the legitimately elected Hamas government and destroying its infrastructure, to stopping the rockets. As they fail to break Gaza's resistance the benchmark has been lowered. Now they speak of weakening Hamas and limiting the resistance. But they will achieve neither. Gaza's people are more united than ever, determined not to be terrorised into submission. Our fighters, armed with the justice of their cause, have already caused many casualties among the occupation army and will fight on to defend their land and people. Nothing can defeat our will to be free.

Once again, Washington and Europe have opted to aid and abet the jailer, occupier and aggressor, and to condemn its victims. We hoped Barack Obama would break with George Bush's disastrous legacy but his start is not encouraging. While he swiftly moved to denounce the Mumbai attacks, he remains tongue-tied after 10 days of slaughter in Gaza. But my people are not alone. Millions of freedom-loving men and women stand by its struggle for justice and liberation - witness daily protests against Israeli aggression, not only in the Arab and Islamic region, but worldwide.

Israel will no doubt wreak untold destruction, death and suffering in Gaza. But it will meet the same fate in Gaza as it did in Lebanon. We will not be broken by siege and bombardment, and will never surrender to occupation.